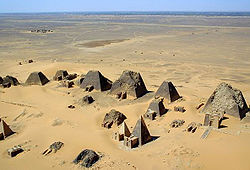 Nubian architecture is diverse and ancient. Permanent villages have been found in Nubia which date from 6000 BC. These villages were roughly contemporary with the walled town of Jericho in Palestine. 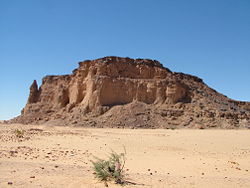 The earliest Nubian architecture used perishable materials, wattle and daub, mudbrick, animal hide and other lite and supple materials. Early Nubian Architecture consisted of speos, structures derived from carving of rock, an innovation of A-Group(c. 3500-2374 BCE) culture, as seen in the Sofala Cave rock cut temple. Egyptians made widespread use of speos during the New Kingdom.[1] Two types of A-Group graves exist. One was oval in shape .8m deep. The second was oval in shape 1.3m deep with a deeper second chamber.[2]

A-Group culture vanished leading to C-Group culture(2200- 1500 BCE). C-Group culture appeared around c. 2200 BC. Settlement consisted of round structures with stone floors. Structural frame was achieved with wooden or pliant materials. Mud-bricks became the preferred building materials as settlements became larger. Graves were circular cylindrical superstructures made of stoned wall. The pit was filled with gravel and stones, and covered with dried mud roof or hay roof. Later, during the Second Intermediate Period, a mud-brick chapel was placed to the north of the grave. Graves were from El Ghaba, Kadero, Sayala, and various other sites in northern Sudan.[3] 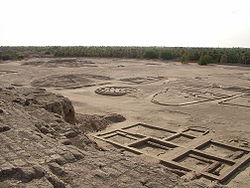 The city of Kerma

C-Group culture was related to Kerma-Culture. Kerma was settled around 2400 BC.It was a walled city containing religious building, large circular dwelling, a palace, and well laid out roads. On the East side of the city, funerary temple and chapel were laid out. It supported a population of 2,000. One of its most endearing structure was the Deffufa, a mud brick temple which ceremonies were performed on top.[4]

The Kerma graves are distinct. They are circular pits covered with white or black pebbles in a circular mound. Four huge graves in the southern part of the site exist. They lie in rows surrounded by smaller graves. The diameter is 300 ft(9 m) covered with circular mounds of white and black dessert pebbles, 3 m high. Underneath exist a complex structure. A pathway running along the diameter is laid with mud walls, supporting the above mound. The mud walls seemed to have been once decorated. The pathway goes to a vaulted chamber with a wooden door, where the king is buried. The king's bed is elaborate with stone carved legs. The vaulted chamber lies in the center of the structure. It is estimated 300 humans and 1000 cattle were probably sacrificed with the king to accompany him in the after-life.[7] 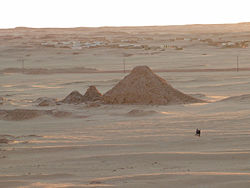 Between 1500-1085 BC. Egyptian conquest and domination of Nubia was achieved. This conquest brought about the Napatan Phase of Nubian history, the birth of the kingdom of Kush. Kush was immensely influenced by Egypt and eventually conquered Egypt. During this phase we see the building of numerous pyramids and temples.

Of much spiritual significance to Nubian pharaohs was Gebel Barkal. Nubian pharaohs received legitimacy from the site. They held pharaonic coronation and consulted its oracle. It was thought to be the dwelling place of Amen-Ra. Temples for Mut, Hathor, and Bes are found. Thirteen temples and three palaces have been excavated. The city of Napata has not been fully excavated. Some of the temples were started by various pharaohs and were added on by succeeding pharaohs, beginning with Egyptian pharaohs. Reisner excavated the region, labeling its monuments B for Barkal. Some are as follows: B200(temple of Taharqa), B300(Taharqa's temple of Mut, Hathor, Bes), B500(temple), B501(outer court), B502(hypostle hall), B700(temple), B800sub(temple of Alara), B1200(palace). Psamtik II of the 26th Dynasty of Egypt sacked the region in 593 BC, destroying all Nubian statues in B500.[8]

El Kurru was the first major site, 13 km South from Gebel Barkal. It was made of sandstone. It range from 10 m to 30 m in height. About 10 pharaohs and 14 queens were buried at El Kurru.

Nuri was another important pyramid site, 6 miles Northeast of Gebel Barkal. It housed 20 pharaohs and 54 queens. The pharaoh's pyramids range from 39.5 m to 65 m in height. The queen pyramid 9 m to 17 m. The tombs were cut out of bedrock. The pharaoh's chamber contained three interconnecting chambers. The queen's contained two interconnecting chambers. 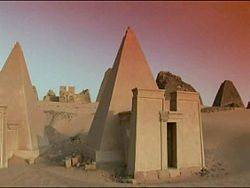 The third Nubian Pyramid site Meroë is considered to be the largest archaeological site in the world. It contains more Nubian Pyramids than any other site.

The ancient Nubians established a system of geometry including early versions of sun clocks.[11][12] Many are located at the sites of Meroë. During the Meroitic period in Nubian history the ancient Nubians used a trigonometric methodology similar to the Egyptians.[13] 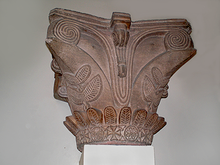 a capital of Faras Church 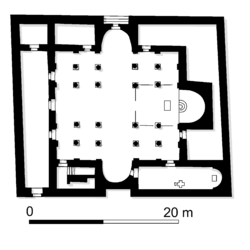 Plan of the Royal Church of Dongola

The Christianization of Nubia began in the 6th century AD. Its most representative architecture are churches. They are based on Byzantium Basilicas. The structures are relatively small and made of mud bricks. The church is rectangular in shape with North and South isles. Columns are used to divide the nave. On the East side is the apse. The altar stood in front of the apse. The area between the altar and apse was called the Haikal. At the West, was a tower or upper room also in the South corner and North corner. Doors were in the North and South walls. A few church survived which were more elaborate, were built of stone, two in Faras and the Ghazail Church.

Vernacular architecture of the Christian period is scarce. Architecture of Soba is the only one that has been excavated . The structures are of sun dried bricks, same as present day Sudan, except for an arch.[14][15]

One prominent feature of Nubian churches are vaults(dome) made out of mud-bricks. The mud-brick structure was revived by Egyptian architect Hassan Fathy after rediscovering the technique in the Nubian village of Abu al-Riche . The technology is advocated by environmentalist as environmentally friendly and sustainable, since it makes use of pure earth without the need of timber.[16]

The conversion to Islam was a slow, gradual process, with almost 600 hundred years of resistance. Most of the architecture of the period are mosques built of mud-bricks. One of the first attempt at conquest was by Egyptian-Nubian, Ibn Abi Sarh. Ibn Abi Sarh was a Muslim leader who tried to conquer all Nubia in the 8th century AD. It was almost a complete failure. An agreement called the Baqt, shaped Egyptian-Nubian relations for six centuries, and permitted the construction of a mosque in the Nubian capital of Dongola for Muslim travelers. By the middle of the 14th century, Nubia had been converted to Islam. The royal Church of Dongola was converted into a mosque. Numerous other churches were converted to mosque.[17]

Graves were simple pits, with bodies pointing to Mecca. Some of the unique structures were the gubbas, graves reserved for Muslim saints. They were whitewashed domes made of adobe bricks.[18]