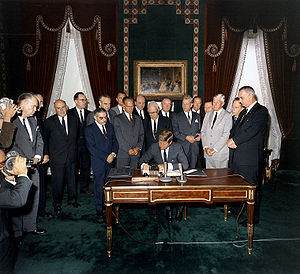 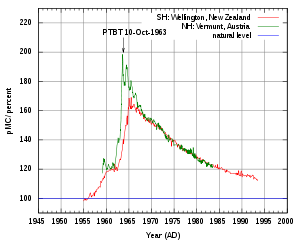 It was signed by the governments of the Soviet Union (represented by Andrei Gromyko), the United Kingdom (represented by Sir Alec Douglas-Home) and the United States (represented by Dean Rusk), named the "Original Parties", at Moscow on August 5, 1963 and opened for signature by other countries. It was ratified by the U.S. Senate on September 24, 1963 by a vote of 80 to 19. The treaty went into effect on October 10, 1963.[1] [2]

Much of the initiative for the treaty had its focus in what was the rising concern about radioactive fallout as a result of nuclear weapons testing underwater, in the atmosphere, and on the ground's surface, on the part of the nuclear powers. These concerns became more pronounced after the United States successfully tested a hydrogen bomb and a thermonuclear device with the power of eight megatons of TNT in the early 1950s and when the USSR detonated a 50-megaton nuclear warhead in 1961.

Initially, the Soviet Union proposed a testing ban along with a disarmament agreement dealing with both conventional and nuclear weapon systems. The Western nuclear powers and the Soviet Union traded positions on this issue over the course of negotiations in the 1950s through offers and counteroffers proposed under the aegis of the U.N. Disarmament Commission. It was only later during 1959 and into the early 1960s that the United States, the United Kingdom, and the Soviet Union agreed to detach a general agreement on nuclear disarmament from a ban on nuclear weapons testing.

The Soviet Union, however, only agreed in principle to a testing ban with no verification regime or protocols. It was over what measures and the method by which they could be effectively carried out that caused much of the deadlock in the latter half of 1961 over a test ban agreement. The problem of detecting underground tests—that is, distinguishing it from an earthquake—proved to be particularly troublesome. Therefore the United States and United Kingdom insisted on intrusive, inspection-based control systems as a means to verify compliance. The Soviet Union, on the other hand, maintained the position that surveillance and seismic detection equipment operated from outside the boundaries of any signatory was adequate to verify compliance. The Western powers felt that any agreement not subject to a control system rigorous enough to verify compliance would set a bad precedent in nuclear arms control for future agreements.

Deadlock ensued until July 1963 when Premier Khrushchev signaled his willingness to give up on a ban that would include underground testing. In effect, this meant the Soviet Union would agree to a test ban in the atmosphere, outer space, and under water environments; a position the Western powers had long favored as an alternative to a more comprehensive (underground environment) ban. This opened an opportunity for a three-power meeting among the United States, the United Kingdom, and the Soviet Union on July 15, 1963 in Moscow. The Moscow negotiations, in reflecting the long deliberations that had gone on for nearly a decade, took relatively little time as the treaty was signed by representatives of the three governments only 21 days later.

Most countries have signed and ratified the treaty. Countries known to have tested nuclear weapons but which have not signed the treaty are China, France and North Korea, although North Korean nuclear tests have not been as successful as those done by the French or Chinese.