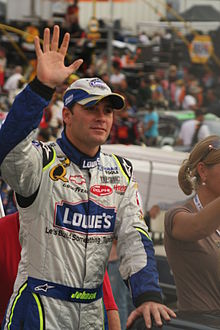 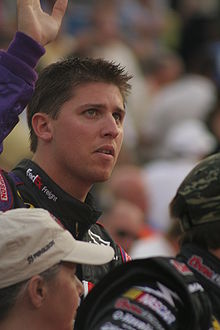 Denny Hamlin came in second behind Johnson by 39 points 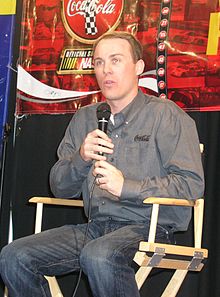 The 2010 NASCAR Sprint Cup Series season was the 62nd season of professional stock car racing in the United States. Beginning at Daytona International Speedway, the season included 36 races and two exhibition races. The season concluded with the 2010 Ford 400 at Homestead Miami Speedway. During the 2009 off season, NASCAR announced a few calendar changes, including a standardized start time. Rick Hendrick won the Owners' Championship, while Jimmie Johnson won the Drivers' Championship with a second finish at the final race of the season. Chevrolet won the Manufacturers' Championship with 261 points.

1The 2009 #55 team number was changed to #56 to match the number Truex and his father used in the NASCAR K&N Pro Series and predecessor series.

2Roush Fenway's #26 due to the five-team to four-team limit. It appears the #26 owner points have been transferred to the new Latitude 43 Motor Sports.

3The #07 Owner Points transferred to the 78 Furniture Row Racing with a technical alliance from Richard Childress Racing.

4The #44 Owner Points transferred to the 98 Richard Petty Motorsports.

5The #96 and #98 Owner Points transferred to the 37 and 38 from Front Row Motorsports, due to an ownership alliance with Doug Yates and Yates Racing.

* – This car was sponsored by Verizon, however it will run the Penske Racing logos due to Sprint's exclusivity clause in their title sponsor contract with NASCAR. Due to that clause, Verizon was not able to assume the grandfather clause rights of Alltel when the purchase was finalized. The team and Verizon will run the car as branded, similar to Marlboro in Formula One and the IRL. Verizon's contract with Penske Racing expired at the end of the 2010 season. Similar schemes with Verizon logos ran in the NASCAR Nationwide Series and the Indy Racing League IndyCar Series.

The total scheduled distance of the season will be 14,461.9 miles (23,274.2 km), but race distances could be shorter or longer depending on weather and green-white-checker finishes. The final schedule was released on September 15, 2009.

Beginning at Martinsville, NASCAR used the 2010 Owner's Points Standings. Teams in the top 35 positions are guaranteed entry into the race; those below must qualify on time.

It was announced in January as part of the annual preseason media tour in Charlotte that, after years of restrictions, drivers would be let loose as it were. Rules were altered to allow for "bump drafting", especially at Daytona and Talladega. On February 10, the green-white-checker finish rule was altered in all three major series (including the Nationwide and Camping World Truck Series) to allow for up to three attempts for said finish. Starting with the Shelby American, NASCAR extended its post-race inspections to include the first car out of the race that was not involved in a wreck; in other words, the first start and park.

At Martinsville, spoilers returned to the Car of Tomorrow after the finish of the 2009 Aaron's 499 that saw Carl Edwards' car becoming airborne and flying into the catch fencing after colliding with eventual winner Brad Keselowski on the last turn.

Fox Sports, their corporate sibling Speed, TNT, and ESPN/ABC are in the fourth year of a seven year television contract scheduled to expire after the 2014 season. Showtime is going to show a highlights show for the first time.

Fox Sports broadcast the first 13 races, including the Budweiser Shootout, the 52nd Daytona 500, and the Coca-Cola 600. With Dover moving to mid-May, Fox ended their coverage with the 51st Coca-Cola 600. The Sprint All-Star Race XXVI along with the Gatorade Duels, practice sessions, and all qualifying and practice sessions (except for Daytona qualifying, which aired on Fox) were all broadcast on Speed. The network's Gopher Cam mascot, Digger, returned for on-screen displays.

Time Warner's Turner Sports division (through TNT) broadcast the next six races, including the Coke Zero 400 at Daytona in its limited commercial interruption wide open coverage format. That race will also be telecast in 3-D on both NASCAR.com and DirecTV. TNT's coverage will begin with the June Pocono race and end with Chicagoland. Qualifying and practice sessions will remain on Speed. Adam Alexander will be the new lead announcer, with Lindsay Czarniak hosting pre-and-post-race shows, replacing Bill Weber and Marc Fein respectively.

ESPN carried the remaining races, beginning with the Brickyard 400. ABC, which formerly carried the last 11 races of the season, will carry the Saturday night races in Bristol, Richmond, and Charlotte.[5] Although previously races could not be moved from ABC to ESPN, early start times and ABC's plans to expand its Sunday morning political shows meant that NASCAR had to allow most Chase races to move to ESPN. This was met from criticism from most of ABC's southern-based affiliates, who had originally counted on NASCAR on those Sundays for ratings gains against the NFL.[6]

Most qualifying sessions will air on ESPN2, practice sessions and some qualifying will be shared by SPEED and ESPN2. Qualifying for the Pep Boys Auto 500 and AMP Energy 500 air on Speed because they are Saturday afternoon sessions during the college football season. Additionally, Jerry Punch was replaced in the play-by-play position by Marty Reid; Punch will return to the pits where he worked at ESPN until 2000.

On radio, Sirius XM Radio will carry all races in the series. Terrestrial radio rights are being handled as follows:

In Canada, TSN and TSN 2 will have full coverage for the 2010 season.

In Australia, Fox Sports will show all Sprint Cup races live across their networks. Network Ten will also show races on its digital sports multichannel, ONE.

In Portugal, all races this season will be telecast on SportTv 3, while in Sweden, Viasat Motor will televise the races.

In nearby Finland, Nelonen Sport Pro will telecast the season's events.

In Spain, Teledeporte telecast six races of the season.

In France, ABMoteurs will broadcast all Sprint Cup races live.

In the United Kingdom, it was originally thought that Sky Sports had not secured the rights to the series for 2010.[7] However, this changed in early February as Sky announced that they will show live coverage of the Daytona 500, with an hour-long highlights package for the rest of the races, on the Monday following each race.[8] The remainder of the season, starting with the Shelby American, will be shown on Open Access 3.[9]

On May 11, the NASCAR Hall of Fame was officially opened in Charlotte, North Carolina. The three-story building houses historic artifacts, interactive displays and the shrine for inductees. The Charter Class of 2010 — made up of seven-time champions Richard Petty and Dale Earnhardt, NASCAR founder Bill France, Sr. and his son and owner/driver Junior Johnson — were inducted on May 23.