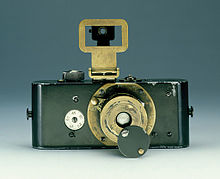 The first Leica prototypes were built by Oskar Barnack at Ernst Leitz Optische Werke, Wetzlar, in 1913. Intended as a compact camera for landscape photography, particularly during mountain trips, the Leica was the first practical 35 mm camera, using standard cinema 35 mm film. The Leica transports the film horizontally, extending the frame size to 24×36 mm, with a 2:3 aspect ratio, instead of the 18×24 mm used by cinema cameras which transported the film vertically.

The Leica went through several iterations, and in 1923 Barnack convinced his boss, Ernst Leitz II, to make a pre-production series of 31 cameras for testing in the factory and by outside photographers. Although the prototypes received a mixed reception, Ernst Leitz took the decision in 1924 that the camera would be manufactured for sale. The camera was an immediate success when introduced at the 1925 Leipzig Spring Fair as the Leica I (for Leitz camera). The focal plane shutter had a range from 1/20 to 1/500 second, in addition to a Z for Zeit (time) position.

Because Barnack's concept for the Leica was to use a small camera, producing a small negative, to make a big picture by enlargement, ("small negative, large picture" concept) the camera needed high quality lenses to create sharp negatives. Barnack tried a Zeiss Tessar on his early protoype camera, but because the Tessar was designed for the 18x24mm cine format its coverage of the Leica's 24x36mm negative was inadequate. Barnack resorted to a Leitz Summar lens for his protoype, but to achieve the resolution Barnack knew was necessary to allow satisfactory enlargement, the 24x36mm format really needed a lens designed specially for it. The first Leica lens was a 50 mm f/3.5 design based on the Cooke triplet of 1893 adapted by Professor Max Berek at Leitz. The lens had five elements in three groups, the third group being three cemented elements, and was initially called the Leitz Anastigmat. Unlike other triplets, the Leitz Anastigmat had the diaphragm placed between the first and second elements. When the Leica was launched this lens was renamed the ELMAX, for E Leitz and MAX Berek. By 1925 the Leitz laboratories had produced glasses with improved optical properties and Professor Berek designed an improved version of the ELMAX called the ELMAR with four elements in three groups, the third group being simplified to two cemented elements, which was easier and cheaper to make.[1] Professor Berek had two dogs, Hektor and Rex. The first of these, Hektor, gave his name to a series of Leica lenses, and the name of the second appeared in the SummaREX.[2]

In 1930 came the Leica I Schraubgewinde with an exchangeable lens system based on a 39mm diameter screw thread, often referred to as " Leica Thread Mount" or LTM. In addition to the 50mm normal lens, a 35mm wide angle and a 135 mm telephoto lens were initially available. In the mid-1930s, a legendary soft-focus lens, the Thambar 90mm f2.2 was designed, and made in small numbers between 1935 and 1949, no more than 3000 units. It is a rare collector's item today.[3][4]

The Leica II came in 1932, with a built in rangefinder coupled to the lens focusing mechanism. This model had a separate viewfinder (showing a reduced image) and rangefinder. In 1932 the flange to filmplane was standarised to 28.8mm, first implemented on Leica model C, and the Leica Standard the following year.[5]

The Leica III added slow shutter speeds down to 1 second, and the model IIIa added the 1/1000 second shutter speed. The IIIa was the last model made before Barnack’s death, and therefore the last model for which he was wholly responsible. Leitz continued to refine the original design through to 1957. The final version, the IIIg, included a large viewfinder with several framelines. These models all had a functional combination of circular dials and square windows.

Early Leica cameras bear the initials D.R.P., which stands for Deutsches Reichspatent, the name for German patents before May 1945. This is probably a reference to German patent No. 384071 "Rollfilmkamera" granted to Ernst Leitz, Optische Werke in Wetzlar, on 3 November 1923.

After the war, Leitz continued to produce the late versions of the Leica II and the Leica III through the 1950s. However, in 1954, Leitz unveiled the Leica M3 introducing the new Leica M mount, a bayonet type lens mount. The new camera also combined the rangefinder and viewfinder into one large, bright viewfinder with a brighter double image in the center. This system also introduced a system of parallax compensation. In addition, it had a new rubberized, reliable, focal-plane shutter. This model has continued to be refined (the latest versions being the M7 and MP, both of which have frames for 28, 35, 50, 75, 90, and 135 mm lenses which show automatically upon mounting the different lenses).

A number of camera companies built models based on the Leica rangefinder design. These include the Leotax, Nicca and early Canon models in Japan, the Kardon in USA, the Reid in England and the FED and Zorki in the USSR.

Leitz offered factory upgrades for earlier model cameras until at least the middle of the 1950s. Many cameras were sent back to the factory and upgraded to the latest model's specification. The converted camera kept the original camera's serial number. [6]

The Leica R4 (1980) introduced the shape of the Leica SLR throughout most of the 1980s and 1990s. The Leica SL2 MOT (1974) was the culmination of the original Leicaflexes. The SL2 was reportedly more expensive to produce than the camera’s price.

From 1964, Leica produced a series of single-lens reflex cameras, beginning with the Leicaflex, followed by the Leicaflex SL, the Leicaflex SL2, and then the R series from R3 to R7, made in collaboration with the Minolta Corporation. The Leica R8 was entirely designed and manufactured by Leica. The current model is the Leica R9, which can be fitted with the Digital Module back. Leica was slow to produce an auto-exposure model, and never made a Leica R model that supported auto-focusing. Leica's U.S. official website announced (25 March 2009) that the R-series has been discontinued. The reason given was that "new camera developments have significantly affected the sales of Leica R cameras and lenses resulting in a dramatic decrease in the number sold. Sadly, therefore, there is no longer an economic basis on which to keep the Leica R-System in the Leica production programme."[1] 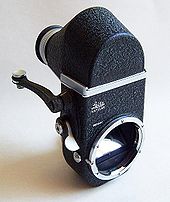 Conceptually bridging the Rangefinder Leicas and the SLR Leicas was the Leica Visoflex System, a mirror reflex box which attached to the lens mount of Leica rangefinders (separate versions were made for the screwmount and M series bodies) and accepted lenses made especially for the Visoflex System. Rather than using the camera’s rangefinder, focusing was accomplished via a groundglass screen. A coupling released both mirror and shutter to make the exposure. Camera rangefinders are inherently limited in their ability to accurately focus long focal-length lenses and the mirror reflex box permitted much longer length lenses.

In the course of its history, Leitz was responsible for numerous optical innovations, such as aspherical production lenses, multicoated lenses, and rare earth lenses. Leica optics are advertised as offering superior performance at maximum aperture, making them well-suited for natural-light photography. 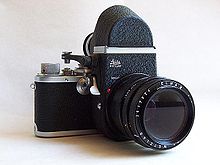 Leica’s answer to the SLR: a Leica Visoflex II on Leica IIIf with 65mm f/3.5 Elmarit

The earliest Leica reflex housing was the PLOOT (Leitz's five letter code for its products), announced in 1935, along with the 200mm f/4.5 Telyt Lens. This date is significant because that it places Leica among the 35mm SLR pioneers. Moreover, until the 1964 introduction of the Leicaflex, the PLOOT and Visoflex were Leica’s only SLR offerings. A redesigned PLOOT was introduced by Leica in 1951 as the Visoflex I. This was followed by a much more compact Visoflex II in 1960 (which was the only Visoflex version available in both LTM (screwmount) and M-bayonet) and the Visoflex III with instant-return mirror in 1964. Leica lenses for the Visoflex system included focal lengths of 65, 180 (rare), 200, 280, 400, 560, and 800mm. In addition, the optical groups of many rangefinder lenses could be removed, and attached to the Visoflex via a system of adapters. The Visoflex system was discontinued in 1984.

Leica offered a wide range of accessories: for instance, LTM (screwmount) lenses were easily usable on M cameras via an adapter. Similarly Visoflex lenses could be used on the Leicaflex and R cameras with an adapter. Furthermore, certain LTM and M rangefinder lenses featured removable optical groups which could be mounted via adapters on the Visoflex system, thus making them usable as rangefinder or SLR lenses for Visoflex-equipped Screwmount and M rangefinder cameras, as well as being usable on Leicaflex and R cameras. Leica also carried in their catalogues focusing systems such as the Focorapid and Televit which could replace certain lenses’ helicoid mounts for sports and natural-life telephotography.

In 1986, the Leitz company changed its name to Leica (LEItz CAmera), due to the strength of the Leica brand. At this time, Leica moved its factory from Wetzlar to the nearby town of Solms. In 1996 Leica Camera separated from the Leica Group and became a publicly held company. In 1998 the Leica group split into 2 independent units: Leica Microsystems[7] and Leica Geosystems.

The Leica is particularly associated with street photography, especially in the mid-to-late 20th century, being used by such noted photographers as Henri Cartier-Bresson.

Leica-branded lenses are used on many Panasonic digital cameras (Lumix) and video recorders. These lenses are manufactured by Panasonic to Leitz quality standards. Collaboration between the two firms extends at all levels, with engineering teams contributing in areas of respective expertise. Panasonic/Leica models were the first to incorporate optical image stabilization in their digital cameras. 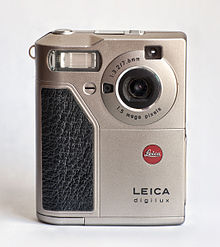 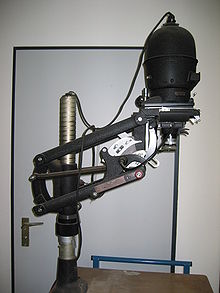 Leica is traded as LCA1 in the Frankfurt stock exchange.