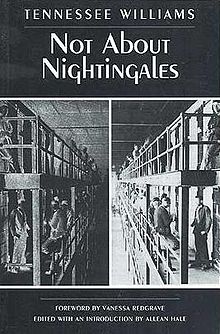 Not About Nightingales is a three act play written by Tennessee Williams in 1938. The play itself focuses on a group of inmates who go on a hunger strike in attempt to better their situation. There is also a soft love story, with the characters Eva, the new secretary at the prison, and Jim, a handsome inmate who works for the warden and is trying to get out on parole. Williams gained inspiration for the play, after reading newspaper accounts of inmates suffocated in a steam room in a Pennsylvania prison.

Although the play was originally written in the 1930’s, it wasn’t discovered until the late 1990’s when a theater actress made it her personal mission to track it down.

The play begins outside the warden’s office with Eva Crane and Mrs. Bristol. Eva is there for a job interview as the new secretary for the Warden, while Mrs. Bristol is here to give her son Sailor Jack some baked goods she made just for him.

Moments after the scene begins, Jim walks through towards the Warden’s office and informs the women that the Warden is out inspecting the grounds, and may not be back for awhile. Mrs. Bristol can’t stay and leaves the food on the Warden’s desk.

Warden Whalen enters in an unannounced, brash way. He is a short, fat, yet powerful man with a presence. Eva begins to beg him for a job; however the Warden doesn’t want to hear it, saying “A business executive is not interested in your personal misfortunes.” In the end, after careful consideration, he gives Eva the job.

Meanwhile, Jim is being escorted back to his cell. Jim is a convict who helps out the Warden during the day. He enjoys the job because it gets him out of his cell all day. At nights when he returns, his cellmates are constantly calling him names such as Allison and Canary Bird. Some of the notable supporting characters introduced are; Butch, the unofficial leader among the inmates; Queen, a gay convict who’s not all that smart; and Ollie, a smart black convict who’s well respected by all the inmates.

The next morning Mrs. Bristol returns to see the Warden and this time she had brought more food for her son. She explains how she hasn’t heard from her son in awhile and is getting worried. The Warden explains, in a coarse manner, that her son had gone insane and had to be killed.

The next day, Eva talks to Jim and asks him about the eating conditions at the prison. Jim says the food is terrible; however the Warden enters, and says that the food is fine. In an effort to put Jim back in line he tells the story to Eva about when Jim first got to the prison and how he had to whip him for 14 straight days to try and brake through his rough exterior. This story is too much for Eva as she ends up fainting at the end of the scene.

Down in the prison, the prisoners begin to get pains in their stomachs and have a hard time getting to sleep. Butch says that it’s the poor food they are served everyday that is causing their pain, and suggests that they all go on a hunger strike. The men, all in pain, agree to the idea. Jim re-enters the prison and tells the men to hold off on the hunger-strike as he feels with his upcoming parole he can “tear down the walls of this prison”.

The men agree and say they will hold off for a little longer, and instead go to dinner and cause a small prison riot. By doing so, they have all earned time in “the hole.”

Back upstairs, Eva is working with the Warden alone in his office. The Warden begins asking personal questions toward Eva and also starts being suggestive, even asking her to “come into the closet with him.” Before anything can happen, Jim walks in with a report about the prisoners in “the hole,” even bringing them up to see him. After talking to them all, the Warden decides they all need more time and he sends them back. Ollie, however, loses himself and doesn’t want to go back; instead he rams his head into a wall and kills himself.

Word reaches the prisoners and at this moment they can’t take it anymore. They are fed up with everything that is going on at the prison and begin their hunger strike.

The Warden begins the act, talking with the Prisons Chaplin, who is concerned about how the Warden is treating his prisoners. The Warden portrays his, “my way or the highway” attitude toward the Chaplin. The Chaplin, not in agreement with the Warden’s methods, decides to quit.

Out in the waiting room, life in the prison is getting a bit restless, due in part of the hunger strike. Eva is answering phone calls left and right, while showing signs of stress during the process. Jim enters and notices Eva’s bloody arm. She tells him that she walked to close to one of the cages and one of the inmate’s grabbed hold of her. Jim tells her she should leave this place, as it’s not safe, but she refuses. Her true feelings for Jim begin to show as she wants to wait till his parole comes up and leave with him. They begin to move in for a kiss when the Warden enters and breaks it up. The new prison reverend enters the office and is instantly hired by the Warden, saying “I pride myself on being adjustable.” He goes on to say that he won’t interfere with what the Warden does because he’s not in charge, he’s just the reverend.

Afterwards, the Warden comes out and lets Jim and Eva know that if the hunger-strike continues, the men in Hall C will be moved to Klondike, a boiler room used as a torture room for out of line inmates, where the temperatures in the room can reach up to 150 degrees.

Moments later, Jim and Eva are alone again in the Warden’s office. Jim opens up to Eva about how he can’t stand the prison, the inmates, the Warden, and the guards. Eva continues to remind him that once he gets parole in a month, the two will be able to runaway together, but Jim is no longer optimistic about his parole. Eva reassures him that he will get out because she plans to go to the newspapers and tell them about all the terrible things that go on in the prison.

At this moment, the Warden enters and tells Jim to take a file downstairs, thus leaving him alone with Eva once again. The Warden tells her that she can’t leave since the building has been put on lockdown. This frightens Eva, getting her worked up, and she eventually passes out. When she wakens, Jim is there by her side, telling her that the Warden was gone, and she will be fine. Eva tells Jim that she wants to leave the prison, no matter what it takes. Jim begins to devise a plan, to meet in the southwest corner of the prison yard when it’s dark out, to attempt their escape together.

The act starts out in Klondike where the prisoners from Hall C are beginning to feel the heat from the steam boiler room. Butch is doing whatever he can to keep the moral up among his men by singing and dancing, but it’s having no effect.

Meanwhile, Jim and Eva have met in the southwest corner of the yard, however, the guards and the Warden have caught them and have began to haul off Jim and put him in Klondike with the other prisoners. Eva, on the other hand, begs the Warden to let her go, and to mail the letter of recommendation for Jim’s release. The Warden sympathizes with her and agrees to both terms, for now.

Back down in Klondike, Jim has joined the rest of the inmates, however, before Schultz, the head guard, can notice anything about Jim or the rest of the inmates, Butch has grabbed hold of the guard and Jim has stolen his revolver and keys. They inmates open the door and lock Schultz into the steaming cell, leaving him to die. Both Butch and Jim storm into the Warden’s office; Butch looking for the Warden, and Jim looking for Eva.

When they have a minute to talk, Eva and Jim discuss their future outside of the prison, and how they’re in love and the many places they plan to travel to.

Suddenly extra police forces arrive at the prison to deal with the prison riots. Jim comes up with a plan to jump out into the river and swim to shore away from all the riots and noise. He gives Eva his shoes and tells her to look for him in the personal columns.

Jim jumps into the water, but because of the height of the jump and the fact that it is late in the night, Eva is unsure if he made it safely in the water. The police arrive up in the tower and grab Eva to take her to safety, bringing the play to an end. As the reader we are unsure if Jim ever did make it out safely.

Eva
Single woman who recently got a job at the prison as the Warden’s secretary.
Jim
Convict who’s been at the prison for 10 years, he works for the Warden.
Warden Whallin
Warden of the prison, unlikeable man.
Butch
Smart talking convict, many look to him as the leader of the convicts.
Ollie
Well respected convict who is very religious. He can’t handle the system and takes his life.
Queen
Image obsessed convict who is a homosexual, and not very bright.
Swifty
New convict, former Olympic athlete, feels he will get out in no time.
Joe
Typical convict, viewed by many as a sidekick to Butch.
Sailor Jack
Old sailor who went insane during his sentence in jail.
Mrs. Bristol
Mother of Sailor Jack.
Chaplin
The Chaplin of the prison who resigns for disagreeing with the Warden.
Reverend
The new Reverend of the prison who doesn’t mind getting pushed around by the Warden.
Mex
Mexican Convict, who is constantly praying for a way out.

Williams had originally written Not about Nightingales for the Group Theatre in New York City. However, they rejected the play and it wasn’t produced until 1998.

Actress Vanessa Redgrave, who was preparing for a role in the 1989 revival of Orpheus Descending, another Williams classic, read an introduction, written by Williams, who referenced to Nightingales, and spoke about the horrors of it. She later said, “Basically, anybody could have found the play, I was the only person who was determined to find it.”[1] She later contacted William’s then-literary executor Maria St. Just, who was able to unearth the manuscript.

Redgrave brought it to Trevor Nunn who agreed to direct the play. His production debuted in London on March 5th, 1998[1] to very positive reviews. Talkin’ Broadway called it “A World Class Production” and “A glimpse in the writing of Williams that would transform him from Tom to Tennessee”.[2]The next year it opened at the Circle in the Square Theatre on February 25th, 1999 and was nominated for six Tony awards, including best play.