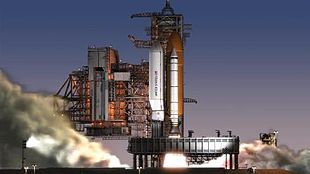 The Shuttle-Derived Heavy Lift Launch Vehicle, also known as the High Confidence Heavy Lift Launch Vehicle (or even variations of the "Side Mount Launch Vehicle" or "HLV" or "Not-Shuttle C") is an alternate launch vehicle proposal for the NASA Constellation program. It was first presented on June 17, 2009 by John Shannon, NASA's Shuttle Program manager, to the Augustine Commission which is tasked to review NASA's human spaceflight program.

It is based on the Shuttle-C concept which has been the subject of various studies since the 1980s. Derived from currently used Space Shuttle hardware, i.e. an Shuttle-Derived Launch Vehicle (SDLV), it is proposed to replace the winged Orbiter from the Space Shuttle stack with a simple non-winged side-mounted payload carrier. The designs of the Space Shuttle's External Tank (ET) and the four-segment Shuttle Solid Rocket Boosters (SRBs) would be reused.

According to NASA's John Shannon the HLV can be developed within 41⁄2 years until the first manned flight occurs. The development program should cost about US$ 6.6 billion,[1] which is only about 20% of the costs currently estimated for the Ares I and Ares V vehicle development.

Following President Obama 2010 space policy speech at Kennedy Space Center and the NASA Authorization Act of 2010 another HLV program, the Space Launch System, which is also Shuttle-derived, has been selected to replace the Constellation launch vehicles, with the development commencing immediately and to be completed by 2016.[citation needed] 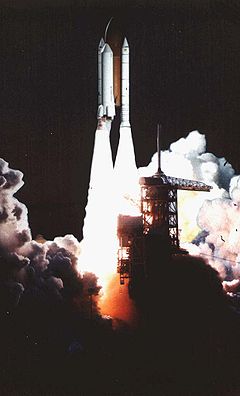 An artist's conception of a Shuttle-C launching at night

The Shuttle-C concept as a cargo only option was not funded in the 1980s and 1990s due to NASA's budgetary constraints. The 2004–2005 industry study provided an updated proposal, which was looked at by ESAS but was ultimately deemed inferior to the Ares I and Ares V option. Crewed side-mounted Shuttle-C concepts were not looked at all in ESAS.

The HLV proposal presented by John Shannon on June 17, 2009 is partly based on the original Shuttle-C proposal but differs considerably from it, mainly due to not using the side-mounted carrier as a separate spacecraft which detaches from the ET and due to proposing to also carry crews on the HLV, not just cargo. The team involved in analysing and designing the HLV design at NASA include about 60 NASA engineers headed by Rick Manella.[3] 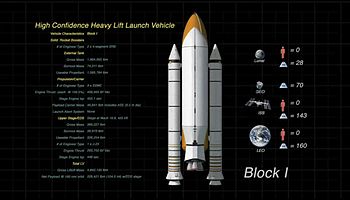 A diagram of the Shuttle-Derived Heavy Lift Launch Vehicle, Block I configuration

This side-mounted carrier includes a boattail carrying the propulsion elements which include 3 Space Shuttle Main Engines weighing about 57,000 pounds (26,000 kg) in total and the 7.5 metres (25 ft) diameter payload carrier with a separable fairing weighing 51,000 pounds (23,000 kg). The basic vehicle does not require an upper stage. Orbit circularization for missions to lower Earth orbit or trans-lunar injection burns for missions to the Moon or other destinations outside of Earth orbit are provided by the payload which detaches from the HLV after the main ET fuel is depleted.[4]

The only completely new hardware development required for the HLV is the side-mounted carrier. All other components used on the HLV are currently in use with the Space Shuttle. According to John Shannon's proposal the first several flights (up to 6 flights) of the vehicle will reuse spare parts of the current Space Shuttle fleet and salvage functioning hardware from the orbiters, including existing avionics modules, the Flight Software and the Space Shuttle Main Engines (SSMEs) (Block I flights). Virtually no change to the current Space Shuttle infrastructure, from the Vehicle Assembly Building to the External Tank barge to the launch pads is required.

Although technically not part of the HLV, the proposal envisions that the upper stage which is attached to the payload and rests in the payload fairing for launch shall be a J-2X engine currently being developed for the Ares I launch vehicle. It provides nearly 300,000 pounds-force (1.3 MN) (vacuum) and has a specific impulse (Isp) of 448 sec. Alternatively The United Launch Alliance has proposed that their Dual Thrust Axis (Lunar) Lander (DTAL) could fit in a side mount payload shroud. The United Launch Alliance proposed ACE 41 and ACE 71 upper stage/fuel depot could also fit inside a side mount payload shroud and the ACE 71 at 75 metric tons (83 short tons) is well within the side mount shuttle derived vehicles payload capacity.[5] This could eliminate the need for evolving the directly shuttle derived vehicle when combined with a fuel depots architecture.

In contrast to prior proposals of Shuttle-C, except for the 4-segment SRBs no part of the vehicle is recoverable and reusable. The HLV uses a different flight profile than the Space Shuttle because no loads on wings have to be considered. The payload fairing 23,000 pounds (10,000 kg) is jettisoned after 185 seconds into the flight at about 57 nautical miles (106 km) altitude in order to improve payload mass of the vehicle. The used SSMEs are not reused and thus can be simplified, but will have to be produced for each vehicle (unlike the Shuttle). For lunar missions, the HLV proposal envisions suborbital staging at 30 nautical miles (56 km) × 120 nautical miles (220 km) of the vehicle to increase mass through TLI (trans-lunar injection) with two burns of the upper stage (a suborbital burn and an additional TLI burn). 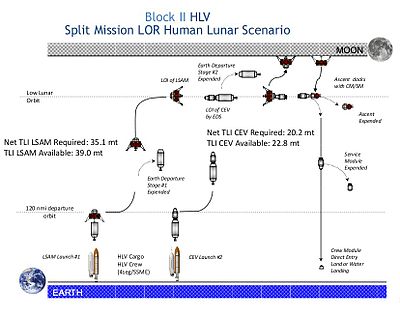 Lunar mission scenario with the HLV, a lunar lander and the Orion spacecraft

While the HLV is designed to provide crew and cargo missions to the ISS, its primary aim is to replace the Ares I – Ares V lunar architecture. The rudimentary mission architecture presented by John Shannon uses a pure Lunar Orbit Rendezvous profile. Two HLVs are launched for the completion of one mission. The first HLV is launched with the lunar lander and immediately places the lunar lander on a trans-lunar injection path. The lunar lander can have a net mass of 35 metric tons after TLI and by itself inserts into a low lunar orbit (LLO). According to John Shannon's presentation in LLO the lunar lander will weigh about 28 metric tons (after burning fuel to get there).[6]

The NASA presentation shows that the HLV has limited growth options to take more payloads into space. While 5-segment SRBs can be used on the vehicle, they will require significant re-engineering of the vehicle and will only yield 7 metric tons more to lower Earth orbit. Other growth options include an upgrade of the SSME to 106% or 109% thrust level and a switch from the J2-x upper engine to an air-startable SSME.[4]