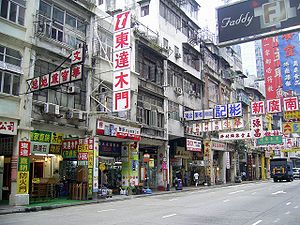 Shophouses in Hong Kong and southern China are commonly known as tong-lau (唐樓) or kee-lau (騎樓). They were usually built in contiguous blocks and range from 3 to 5 storeys with verandahs or balconies facing the street. Shophouses were used for both commercial and residential purposes. This is an important symbolization of the livelihood of local hongkongers in the old days. While people nowadays tend to step out far away from home to earn a living like travel to work everyday by MTR or even travel to mainland China everyday to work there, old Hong Kong people tend to make the best use of the place they live to earn a living, making them a very active member of their own residential community. The ground floor was usually devoted to family businesses like small stores and clothes selling while the upper floors were for residential purpose with sub-tenancy and renting of beds. In Hong Kong, this kind of building is being replaced by high-rise buildings and the number of shophouses has declined sharply in recent years.

Shophouses were mainly occupied by Chinese and predominantly seen all over southern Chinese cities and town in the 19th century. There were various reasons for the existence of tong lau in Hong Kong, which including economic development of Hong Kong, Second World War and also the influx of Chinese migrants to Hong Kong.[1]

These 10 shophouses in Shanghai Street are believed to have been built in the 1920s and 1930s, which are typical of an old commercial street. These typical shophouses are composed of shops on the ground floor which open up to a public arcade or "five-foot way", and low-rented residential accommodations upstairs.[3] Shops like selling furnishings, building construction materials (such as window frames, curtains, paint and hardware), traditional Chinese utensils, ceremonial items, traditional Chinese wedding gowns, grocery, snake soup as well as traditional Nepalese snacks can be found in Shanghai Street.[3][4][5][6] There are lines of stores filled with Chinese and Western household kitchen tools as well as products that can kit out even an entire restaurant. These kitchen products, which include mixers, grinders, gas rings, cleavers, various chopping boards, racks, steamer trays what not, are usually sold by specialist merchants. Although a majority of products on sale at many shops along Shanghai Street display price tags, they are not fix-rated, giving the consumers the opportunity to use their bargaining skills. [7]

Nowadays, Nos. 600–606, 612–614 and 620–626 are retained as pre-World War II structures with some recent buildings erected in between. And, it is believed that Nos. 620 – 626 are the oldest buildings among them. In view of their historical and architectural merit, the Shanghai Street shophouses were classified as a Grade I historical buildings by the Antiquities Advisory Board since 2000.[8][9]

As part of Hong Kong's living heritage, those shop houses are still functional in their communities and play important roles in the lives of local people.[3] In recent years, residents and individuals have refurbished some shophouses and converted them into restaurants, shops or artists’ interaction center like Shanghai Street Artspace project managed by the Department of Creative Arts of the Hong Kong Institute of Education (HKIEd) aiming to explore, develop and learn from the artistic culture of Yau Ma Tei.[3][10]

Building in contiguous blocks in elongated layout, the narrow frontage is one of the characteristics of tong-lau. Shophouses in Shanghai Street are basically three storeys high, but additional accommodation built on the roofs makes them make them look like four-storey building. They are classified as "Verandah Type" shophouses because they have verandahs at each floor level facing the street, which is now enclosed with glazing. The verandahs are supported by columns and project over the pavement, forming an arcade for pedestrians. This type of development is now obsolete as it was discontinued after the Second World War.

Internally, mezzanine floors and cocklofts are constructed to form extra bed spaces compounding the overcrowding problem. There are no toilets or bathrooms, all ablutions had to perform in the kitchens at the rear.

The architectural characteristics of shophouses can reflect the live of the middle class, which is the majority of the society at that time during the post-war period. Architectural features such as concrete railings, and external renderings, using Shanghai plaster, were expensive to do at that time.[2]

In spite of the dilapidated condition and various alterations and refurbishment works, the shophouses are very good and fairly authentic examples of typical shophouses of the pre-war period. It is because almost all their original building materials and decorations are preserved.

Verandah type shophouses are now rare in Hong Kong due to the prohibition of arcades under the building ordinances in the 1960s. Therefore, shophouses have considerable built heritage value as well as social value and local interest.[8]

The URA has two alternatives: to buy property rights of the shop houses and redevelop them into commercial or other uses; to re-zone them so as to limit the use of those shop houses for preservation purposes.[3] Most of the cost, about $1.23 billion, would be spent on property acquisition and tenants' rehousing of the 73 households with 220 residents in the two sites' 24 buildings. The remaining one-tenth of the sum is used for renovation.

For shophouses in Shanghai Street, necessary building services such as lifts, fire escapes and disabled access for the shophouses would be built in the 1960s buildings. The exact usage of the revamped shophouses is not been determined and is open to any options. One of the tentative suggestions is to house low-priced restaurant so that the public will have opportunities to use the verandas. The proposed aim is transforming Shanghai Street into a popular food street, or directly translated from the Chinese as "Food Paradise".[12]

In addition, the authority plans to reserve the shops upstairs for the arts community, such as bookstores and dance studios. The cluster of shophouses on Prince Edward Road East would be remained as a part of the flower market so that the thriving flower trade would not be disrupted.

The Prince Edward Road East project and the Shanghai Street project are expected to be completed by 2014 and 2015 respectively.[13][14] But some people see problems with the URA’s plans: not so much capital a conservation strategy as an acquisition or buy-out of properties; elimination of Shanghai Street true character by removing the stores and residents.[12]