The Aviva Indoor Grand Prix is an annual indoor track and field competition which is held in mid-February at the National Indoor Arena in Birmingham, England. It is one of a handful of events to hold IAAF Indoor Permit Meetings status.[1] As one of the later major meetings of the indoor athletics season, it often serves as preparation for the biennial European Athletics Indoor Championships and IAAF World Indoor Championships. The meeting is directed by former athlete Ian Stewart and attracts numerous high calibre athletes including World and Olympic medallists.[2]

The event is one of three indoor athletics competitions in the United Kingdom which are sponsored by Aviva, alongside the Aviva UK Indoor Championships and the Aviva International Match in Glasgow.[3] The Aviva Indoor Grand Prix was previously known as the Norwich Union Indoor Grand Prix prior to the sponsor's rebranding as Aviva in 2009.[4]

Over the course of its history, numerous world records have been set at the Aviva Indoor Grand Prix. 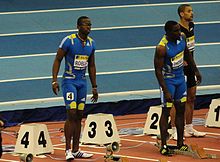 Dayron Robles, 2008 Olympic champion, lining up for the 60 metres hurdles 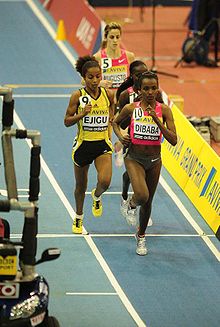