The Way You Do the Things You Do

The Way You Do the Things You Do

"The Way You Do the Things You Do" is a 1964 hit single by for the Gordy () label. Written by Miracles members and , the single was The Temptations' first charting single on the , peaking in the Top 20 at number 11.

Falsetto sings lead on the record, composed by Robinson and Rogers while on the road with The Miracles as part of the tour. Its plethora of pick-up lines ("You got a smile so bright/you know you coulda been a candle/I'm holding you so tight/You know you coulda been a handle") began as a light-hearted joke between Robinson and Rogers to pass time on the long bus rides. Realizing they had something they could work with, the Miracles kept the lyrics in mind and prepared the song for the Temptations, who by this time had only one single that had ever made it onto a Billboard chart (1962's "Dream Come True" made it to #22 on the R&B singles chart) and "six" flopped singles.

The recording was done on , a mere two weeks after founding Temptation had been fired, and 's younger brother had taken Bryant's place. While Ruffin would sing lead on stage he would remain a background singer on the singles for most of 1964, but after Smokey Robinson heard him sing lead during the Temptations' Motortown Revue performance, Ruffin was assigned to sing lead on what would become the Temptations' first number-one hit, "My Girl".

The Temptations learned about the success of "The Way You Do the Things You Do" after returning home to and hearing nonchalantly from a Motown executive that "oh, you guys got a hit." After reading the number 77 ("with a bullet") listing in "Billboard" magazine, Temptations members and immediately began crying with joy.

* Lead vocals by
* Background vocals by , Paul Williams, , and
* Instrumentation by

Also, The Band frequently performed an extended jam of the song in concert, often lasting ten minutes or more.

American Pop/R&B singer is covering the song for her upcoming second album "".

Infobox Single
Name = The Way You Do the Things You Do 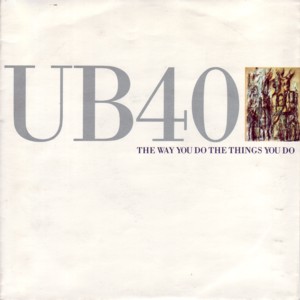