The Norwegian Crusade was a crusade that lasted from 1107 to 1110, in the aftermath of the First Crusade, by the lead of the Norwegian king Sigurd I.[2] Sigurd was the first European king to ever go on crusade to the Holy Land, and not one battle during the crusade was lost. The Norwegian crusade seems to have acted out very similar to earlier Viking raids, though the Norwegians' ultimate aims were different this time.[1]

The journey to Jerusalem

After several months they came to the town of St. James (Jakobsland)[3] in Galicia (Galizuland) where they were allowed by a local lord to stay for the winter. However when the winter came there was a shortcoming of food, which made the lord refuse to sell food and goods to the Norwegians. Sigurd then gathered his army, attacked the lord's castle and looted what they could there.

During the travel the Norwegians encountered a great pirate ("viking") fleet of galleys which were seeking peaceful trading-ships to rob. However, Sigurd set his course straight for the pirates and stormed their ships. After a short time all the pirates had been either slain or escaped, and Sigurd acquired eight ships from them.

After this they came to a castle in Muslim Al-Andalus called Sintra (Sintre - present day Sintra, Portugal, probably referring to Colares which is closer to the sea). They took the castle, and killed every man there as they had refused to be christened. Further they sailed to Lisbon, a "half Christian and half heathen" city, said to be the division between Christian and Muslim Iberia. There they won their third battle, and acquired great treasures.

Their fourth battle was won in the town of Alkasse (possibly a reference to Al Qaşr[3]) where they killed such a large number of people the town was said to have been left empty. Also here they looted many treasures 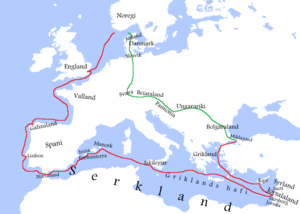 The route taken by Sigurd I to Jerusalem and Constantinople (red line) and back to Norway (green line) according to Heimskringla. (Legend in Old Norse.)

After another victorious battle against pirates when sailing through the Strait of Gibraltar (Norfasund) they sailed further along the saracen land (Serkland)[3] into the Mediterranean (Griklands hafi), and arrived at the Balearic Islands. The Baleares were at the time perceived by Christians to be nothing more than a pirate haven and slaving center. The Norwegian raids are also the first recorded Christian attacks on the Muslim Balearic islands (though smaller attacks certainly had occurred).[3]

The first place they arrived at was Formentera, where they encountered a great number of Blåmenn (Blue or black men) and Serkir (Saracens)[3] who had taken up their dwelling in a cave. The course of the fight is the most detailed of the entire crusade through written sources, and might possibly be the most notable historic event in the small island's history.[3] After this battle, the Norwegians supposedly acquired the greatest treasures they had ever got. They then went on to attack Ibiza, and then Minorca, in both places victoriously. The Norwegians seem to have avoided attacking the largest of the Balearic islands, Mallorca, most likely as it was at the time the prosperous and well fortified center of an independent taifa kingdom.[3] Tales of their success may have inspired the Catalan–Pisan conquest of the Baleares in 1113–1115.[3]

In the spring of 1109, they arrived at Sicily (Sikileyjar) where they were welcomed by the ruling Count Roger II who was only 12–13 years old at the time.

In the summer of 1110 they finally arrived at the port of Acre (Akrsborg)[3] (or perhaps in Jaffa[1]), and went to Jerusalem (Jorsala) where they met the ruling crusader king Baldwin I. They were warmly welcomed, and Baldwin rode together with Sigurd to the river Jordan, and back again to Jerusalem.

The Norwegians were given much treasures and relics, including a splinter off the True Cross that allegedly Jesus himself had been crucified on. This was given on the condition that they would continue to promote Christianity and bring the relic to the burial site of St. Olaf.

Later Sigurd returned to his ships at Acre, and when king Baldwin were going to the "heathen" (i.e. Muslim) town of Sidon (Sætt) in Syria (Sýrland) Sigurd and his men accompanied him in the siege. The town was then taken and subsequently the Lordship of Sidon established.

The journey back to Norway 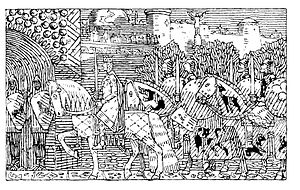 King Sigurd and his men ride into Miklagard by Gerhard Munthe.

After this Sigurd and his men sailed to Cyprus where they stayed for a short while, before again traveling to Greece and arriving at a Greek port identified as Engilsnes. They stayed here for a while as Sigurd wanted to wait for a sidewind, as the sails of his ships would blow up and look more impressing to the Byzantines.

When they finally sailed into Constantinople (Miklagard) they saw that "over all the land there are burghs, castles, country towns, the one upon the other without interval". The sails of Sigurd's ships were so close that they seemed to form only one enormous sail. All the people of Constantinople came out to see Sigurd sailing into the city, and Emperor Alexios I opened the city port.

When Sigurd was preparing to go back to Norway, he gave all his ships and valuable figureheads to the Byzantine Emperor Alexios I. In turn Sigurd received many horses which he would use to travel home over land. Many of his men stayed behind to take up service for the Byzantines.

Sigurd travelled, in a trip that supposedly would take around three years[3], from Bulgaria (Bolgaraland) and through Hungary (Ungararíki), Pannonia, Schwabia (Sváva), and Bavaria (Beiaraland) where he met with the Emperor Lothar of the Holy Roman Empire (Rómaborg). He later arrived in Denmark where he was greeted by king Niels who eventually gave him a ship so that he could sail home to Norway.