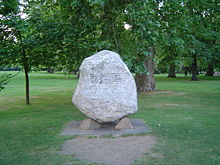 Both countries established diplomatic relations in 1905, after Norway’s independence. The UK has an embassy in Oslo. Norway has an embassy in London. Relations, however, go as far back as the Viking Age when Norse Vikings raided the British Isles, founding permanent settlements in the west of England, Isle of Man, the Hebrides, Scotland, Orkney and Shetland. As a result, the English language has been greatly influenced by the Norwegian language. This cultural bond has persisted to this day, resulting in a close cultural relationship between the two countries.

During World War I, Norway was neutral. However, due to largely favouring the British over the Germans, Norway came to be known as The Neutral Ally.

One of the most famous Christmas trees in the United Kingdom, Trafalgar Square Christmas tree is donated to the people of London by the city of Oslo each year since 1947. 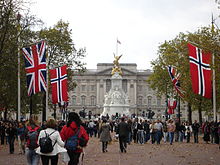 The Norwegian and British flags outside Buckingham Palace.

As a token of appreciation from the Norwegian people to the people of Britain, a Norwegian Christmas Tree is sent every year from Oslo to Trafalgar Square in London.

Each year for the last 60 years Newcastle upon Tyne has received a Christmas tree as a gift from the people of Bergen, one of Newcastle’s twin cities. The impressive Norwegian spruce, standing at 45 feet tall, was personally felled by Gunnar Bakke who has been the mayor of Newcastle’s twin city since September 2007. Each year the tree is decorated in traditional Norwegian white lights and is a symbol of peace and goodwill. The people of Norway also send a tree to the town of Great Grimsby every Christmas since the end of World War II, For the past few years the tree has been selected by the people of Sortland.

Norway and the U.K. share mutual border boundary lines in Antarctica, and mutually recognise each others claims as well as those of Australia, France and New Zealand.