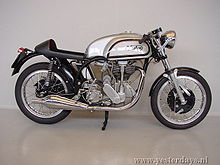 The featherbed frame was a motorcycle frame developed by the British Norton motorcycle company to improve the performance of their racing motorcycles around the twisting and demanding Isle of Man TT course in 1950. It was considered revolutionary at the time, [1] and the best handling frame that a racer could have. [2] Later adopted for Norton production motorcycles, it was also widely used by motorcyclists on custom built hybrids and cafe racers such as the Triton, became legendary and remains influential to this day. [1] The Featherbed was replaced with the Norton Isolastic frame for the Norton Commando in September 1967[3] but continues to be produced by specialist companies.[4]

In 1949 brothers Rex and Cromie McCandless offered Norton a new frame to support their successful 500cc race single. Rex McCandless was a self taught Belfast motorcycle engineer and raced competitively with his brother on a Triumph Tiger 100. He had made several improvements to the Triumph, notably an innovative new frame with a swinging arm fitted with vertical hydraulic shock absorbers from a Citroen car.[5] BSA bought several of his converted motorcycles but Norton saw the real opportunity and contracted him to work exclusively for them from 1949. The Norton Motorcycle Company were concerned at the reliability of their plunger (or "Garden Gate") frame, as several had broken through the stress of racing. Norton engineer Joe Craig solved the problems by making the frames heavier but handling suffered as a consequence.[5]

Norton commissioned the McCandless brothers to design a complete frame, incorporating a swinging arm. McCandless' finished design was expensive, as it required over forty feet of best Reynolds steel and was a welded twin loop with a swinging arm fitted with his own design of shock absorbers, with a heavily braced cross-over headstock. In two months a prototype motorcycle with the new frame was on the test track and it was tested on the Isle of Man in the winter of 1949. It performed well and Norton decided that the Norton works team would have motorcycles with the new frames. The Norton works was not well equipped so the sif-bronze welding was undertaken by McCandless who produced the eight frames for the racing team by hand.[4]

Norton applied for a patent for the design on October 13, 1949 and it was granted as reference 664,667 but the completed specification was not published until January 9, 1952. The Featherbed frame was simply constructed.[6]

This invention relates to a new or improved frame for a motorcycle which comprises two substantially parallel rectangular loops each formed from a single length of tubing, and the ends of the tube forming each loop cross and are welded to each other at the top front corner of the loop, the free ends of the tube which extend beyond the crossing point being welded to the side of an inclined head tube adjacent to the top and bottom thereof. The assembled frame is extremely strong for its weight and designed to provide the maximum resistance to any stresses applied to the frame by road shocks or by the driving torque of the power unit.

Harold Daniell was a successful Isle of Man TT racer with three victories and several placings in the Tourist Trophy races and the Manx Grand Prix.[7] After testing the new Norton frame in 1950 he declared that it was like "riding on a featherbed" compared with riding the "garden gate[8]" — and it has been called the featherbed frame ever since.[9]

The "Brough Superior" Rear Spring Frame, to quote "Castor" of "Motor Cycling," renders "pitching or wobble non-existent, impossible. A feather bed could scarcely be safer" -- and this in relating his experience on a Special "Brough Superior" S.S. 100, on which he did 106 m.p.h. in second gear on the road ![10]

Further testing took place at Montlhery race track with four motorcycles running flat-out for two days. The new frame stood up well to tests and saw its UK launch at Blandford Camp in Dorset in April 1950. Geoff Duke had won the Senior Clubmans TT and the Senior Manx Grand Prix in 1949 on the earlier type Nortons, so was a clear choice for Norton to really put the new Featherbed-framed race bikes to the test. Duke won the race on the new design and several racing successes followed with Norton winning first three places in the 1950 Senior and Junior TT's.[5] Duke set a new lap record of 93.33 mph and also broke the overall race record, finishing in two hours, 51 minutes and 45 seconds. He then went on to finish second in the Junior TT. (Harold Daniell's Norton was third.) When it came to the bends on the twisting Island course the new frame gave the Nortons a distinct advantage.[4]

Featherbed frames were also successful modified for use in off road racing or motorcycle scrambling. [11]

Weight and strength were key factors in the design of the featherbed frame for the Norton racing team's Manx. 16- Gauge Reynolds 531, a high-tensile manganese-molybdenum steel alloy, was used as it allowed the frame tubes to be made thinner for the same strength, as well as making for a more responsive frame. All the joints were Sifbronze welded, except for the sub frame which were initially bolted on but also welded in later versions.[12]

In 1953 the Norton International was relaunched with a new version of the Featherbed frame made from grade A mild steel.[13]

In 1959 Norton put the old single cylinder Model 50 (350cc) and the Norton ES2 (500cc) into the Featherbed frame to rationalise production. Using grade A mild steel, the size of this engine determined the space between the top and bottom rails of the full duplex cradle. In 1960 the top rails were installed at the rear of the tank.[14] Riders complained that these wideline Featherbed frames were uncomfortably wide at 11.5 inches (29 cm) but it was not until 1960 that the top runs of the frame were narrowed towards the front of the seat.[12] 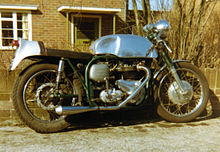 The specialist builders Unity Equipe produced a Norton Featherbed racing Frame from lightweight T45 Aircraft specification 17 SWG steel with a high carbon content. The joins are brazed and most of the components are laser cut using the latest technology. The Swinging arm is made from layers of T45 pressed to shape and take bushes of Unity's own design. This frame is popular with builders of Manx replicas and Tritons. Unity also produce standard Featherbed wide line and slim line frames and stock original frames.[15]