The pilot episode of the mystery television series Twin Peaks premiered on the ABC Network on Sunday, April 8, 1990. It was written by series creators Mark Frost and David Lynch, and directed by Lynch. The pilot follows the characters of Dale Cooper and Harry S. Truman as they investigate the death of popular high school student Laura Palmer; Cooper believes the murder has connections to a murder case that occurred a year earlier. In addition to setting the tone for the show, the episode sets up several character and story arcs and marked the appearance of several recurring characters. The episode received a strong Nielsen household rating compared to other season one episodes and was well-received by fans and critics alike. The original title for the series was "Northwest Passage", but this was later changed. 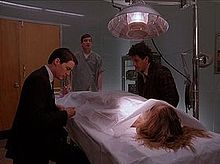 The small northwest town of Twin Peaks, Washington is shaken when the body of Laura Palmer is discovered washed up on a riverbank, wrapped in plastic. FBI Special Agent Dale Cooper is called in when Ronnette Pulaski, who attended the same high school as Palmer, is found wandering on a bridge before lapsing into a coma. Cooper believes there is a connection between Palmer's death and the death of another girl named Theresa Banks that happened a year earlier. Cooper discovers a small piece of paper with the letter "R" on it shoved under Laura's fingernail. He tells Sheriff Harry S. Truman that under Banks's nail he found a "T". Meanwhile, the Palmer family and friends struggle to come to terms with her death, and wonder how it might have come about.

David Lynch and Mark Frost pitched the idea to ABC during the time of Writers Guild of America, East strike in 1988 in a ten-minute meeting with the network's drama head, Chad Hoffman, with nothing more than this image and a concept. According to the director, the mystery of who killed Laura Palmer was initially going to be in the foreground, but would recede gradually as viewers got to know the other townsfolk and the problems they were having. Lynch and Frost wanted to mix a police investigation with a soap opera.[1]

ABC liked the idea, and asked Lynch and Frost to write a screenplay for the pilot episode. Frost wrote more verbal characters, like Benjamin Horne, while Lynch was responsible for Agent Dale Cooper. According to the director, "He says a lot of the things I say".[2] Originally, the show was entitled Northwest Passage and set in North Dakota, but the fact that a town called Northwest Passage really exists prompted a revision in the script. They filmed the pilot for $1.8 million[3] with an agreement with ABC that they would shoot an additional "ending" to it so that it could be sold directly to video in Europe as a feature if the TV show was not picked up.[4] However, even though ABC's Bob Iger liked the pilot, he had a tough time persuading the rest of the network brass. Iger suggested showing it to a more diverse, younger group, who liked it, and the executive subsequently convinced ABC to buy seven episodes at $1.1 million apiece.[5] Some executives figured that the show would never get on the air, believing it would meet negative reviews from viewers and critics alike.[3] However, Iger planned to schedule it for the spring. The final showdown occurred during a bi-coastal conference call between Iger and a room full of New York executives; Iger won, and Twin Peaks was on the air.[6]

Lynch, the co-writer of the episode as seen in 2007

At several points during the filming of the pilot episode, David Lynch improvised by incorporating on-set accidents into the story. The most notable of these occurred when set decorator Frank Silva was accidentally filmed in a mirror during Sarah Palmer's vision at the end of the pilot. When Lynch saw Silva's face, he liked it so much he kept it in the show, and cast Silva as Killer BOB, the mysterious tormentor of Laura Palmer.[7]

During the filming of the scene in which Dale Cooper first examines Laura's body, a malfunctioning fluorescent light above the table flickered constantly, but Lynch decided not to replace it, since he liked the disconcerting effect that it created. Also, during the take, one of the minor actors misheard a line and, thinking he was being asked his name, he told Cooper his real name instead of saying his line, briefly throwing everyone off balance. Lynch was reportedly pleased with the lifelike, unscripted moment in dialogue, and kept the mistake in the final cut.[8]

Before ABC broadcast the pilot, it was shown on February 10, 1990 as part of the Miami Film Festival. Summarized by Mark Frost at the time as "Blue Velvet meets Peyton Place," one local review said "the Lynchian sense of impending danger and kinky sexual undercurrents, coupled with excellent music, makes the Twin Peaks pilot work almost too well. You'll want to see the entire package in one sitting. But the series may lay an egg on television because of its drawn-out and deliberate pacing, brutality, sex with violence and a hint of something else ... something deadly, yet unseen and probably repulsive."[9]

In April, a screening was also held at the Museum of Broadcasting in Hollywood.[10] Media analyst and advertising executive Paul Schulman said, "I don't think it has a chance of succeeding. It is not commercial, it is radically different from what we as viewers are accustomed to seeing, there's no one in the show to root for."[10]

The two-hour pilot was the highest-rated movie for the 1989–1990 season with a 21.7 rating and was viewed by 34.6 million people.[11] In Los Angeles, Twin Peaks became the seventh most-watched show of the week earning 29% of viewers, while the most-watched show being Married... With Children whom gathered 34% of viewers.[12] The following episode, "Traces to Nowhere" would start with a significant drop in ratings with only 23.2 million people tuning in,[13] Various media such as The New York Times and local radio stations announced that the show had managed to grow a cult following. According to a local radio station, many viewers were "offended with some of the sexual overtones or the eating sequence".[14]

Initially, the show's Thursday night time slot was not a good one for soap operas as both Dynasty and its short-lived spin-off The Colbys did poorly.[10] Twin Peaks was also up against the hugely successful sitcom, Cheers. Initially, the show received a positive response from TV critics. Tom Shales, in the Washington Post, wrote, "Twin Peaks disorients you in ways that small-screen productions seldom attempt. It's a pleasurable sensation, the floor dropping out and leaving one dangling."[17] In the New York Times, John J. O'Connor wrote, "Twin Peaks is not a sendup of the form. Mr. Lynch clearly savors the standard ingredients...but then the director adds his own peculiar touches, small passing details that suddenly, and often hilariously, thrust the commonplace out of kilter."[18]

Many critics saw the pilot as "the movie that will change TV" history, according to Diana White from the Boston Globe.[19] Ken Tucker from Entertainment Weekly was strongly positive about the episode, giving it a A+. While liking the story, and calling Lynch's directing beautiful, he said it "not a chance in hell" the show could become a rating hit, because of its "unsettling" story.[20] David Zurawik from The Baltimore Sun compared the pilot to the work of Alfred Hitchcock. He also said its cinematography was "about as close as prime-time television gets to art."[21] Jen Chaney from The Washington Post called the pilot "one of the most finely crafted series kick-offs in broadcast history".[22]

Due to rights issues, the American pilot (94 minutes long) was not released in the United States home video market until 2007. The European pilot (116 minutes) had been released on VHS and laser disc years earlier. Both versions of the pilot are included in the Twin Peaks: Definitive Gold Box Edition DVD set, released in the US on 30 October 2007.[23] An alternate version of the pilot was aired in Europe as a stand-alone television movie. This version is identical to the United States-aired version up until the last several scenes, when the killer of Laura Palmer is revealed. Lynch was so pleased with the footage shot for the European ending that he later incorporated some of it into Cooper's dream sequences that aired in subsequent episodes.[24][25]