The Steller sea lion (Eumetopias jubatus) also known as the northern sea lion, is a threatened species of sea lion in the northern Pacific. It is the sole member of the genus Eumetopias and the largest of the eared seals (Otariidae). Among pinnipeds, it is inferior in size only to the walrus and the two elephant seals. The species is named for the naturalist Georg Wilhelm Steller who first described them in 1741. The Steller sea lion has attracted considerable attention in recent decades due to significant, unexplained declines in their numbers over a large portion of their range in Alaska.

Adult animals are lighter in color than most sea lions, ranging from pale yellow to tawny and occasionally reddish. Steller sea lion pups are born almost black, weighing around 23 kg (50 lbs), and remain dark for several months. Females and males both grow rapidly until the fifth year, after which female growth slows down considerably, attaining on average 2.5 m (8 feet) in length and 300 kg (660 lbs). Males continue to grow until their secondary sexual traits appear in their fifth to eighth year. Males are slightly longer than the females; they grow to about 2.82–3.25 m (9.2–10.7 feet) long [2] and have much wider chests, necks and general forebody structure and weigh 544–1100 kg (1200–2500 lbs).[3][4] Males are further distinguished by broader, higher foreheads, flatter snouts, and darker, slightly tuftier hair around their large necks, giving them a maned appearance. Indeed, their Latin name translates roughly as: "maned one with the broad forehead". 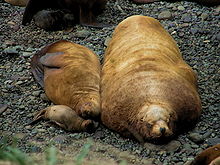 The range of the Steller sea lion extends from the Kuril Islands and the Sea of Okhotsk in Russia to the Gulf of Alaska in the north, and down to Año Nuevo Island off central California. They formerly bred as far south as the Channel Islands but have not been observed there since the 1980s. Based on genetic anаlyses and local migration patterns, the global Steller sea lion population has traditionally been divided into an Eastern and Western stock at 144° W longitude, roughly through the middle of the Gulf of Alaska.[5][6] Recent evidence suggests that the sea lions in Russia in the Sea of Okhotsk and the Kuril islands comprise a third Asian stock, while the sea lions on the eastern seaboard of Kamchatka and the Commander Islands belong to the Western stock 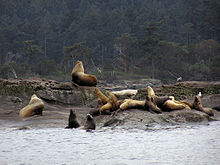 In the summer period, Steller sea lions tend to shift their range somewhat southward. Thus, though there are no reproductive rookeries in Japan, there are several consistent haulouts around Hokkaidō in the winter and spring.

Steller sea lions are skilled and opportunistic marine predators feeding on a wide range of fish and cephalopod species. Important diet components include walleye pollock,[7][8] Atka mackerel,[7] halibut,[8] herring , capelin,[9] flatfish [9][10] Pacific cod,[7][8] rockfish,[9][10] sculpins,[9] and cephalopods.[7] They seem to prefer schooling fish and remain primarily in between inter-tidal zones and continental shelves. They are also known to enter estuarine environments and feed on some semi-freshwater fish like sturgeon. Very occasionally, they have been known to predate on Northern fur seal, harbor seal and sea otter pups. They are near the top of the marine food chain but are susceptible to predation by killer whales and white sharks. 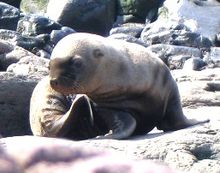 Reproductively mature male sea lions aggregate in May on traditional, well-defined reproductive rookeries,[11][12] usually on beaches on isolated islands. The larger, older males establish and defend distinct territories on the rookery.[11][12] A week or so later, adult females arrive, accompanied occasionally by sexually immature offspring, and form fluid aggregations throughout the rookery. Like all other otariids, Steller sea lions are polygynous. However, unlike some other species, they do not coerce individual females into harems but control spatial territories among which females freely move about.[11] Steller sea lions have use three types of territories; aquatic, semi-aquatic and terrestrial. Males with semi-aquatic territories have the most success in defending them.[12] The boundaries of territories are defined by natural features such as rocks, faults or ridges in rocks. Territories can remain stable for 60 days.[11]

Pregnant females give birth soon after arriving on a rookery, and copulation generally occurs one to two weeks after giving birth,[11][12] but the fertilized egg does not become implanted in the uterus until the fall. Twins are rare.[13] After a week or so of nursing without leaving the rookery, females begin to take progressively longer and more frequent foraging trips leaving their pups behind, until at some point in late summer the mother and pup both leave the rookery. Reproductive males fast throughout the reproductive season,[14] often without entering the water once from mid-May until August, at which point the structure of the reproductive rookeries begins to fall apart and most animals leave for the open seas and disperse throughout their range.

Age at weaning is highly variable, pups may remain with their mothers for as long as 4 years. Incidents of mothers feeding daughters who are simultaneously feeding their own newborn pups have been documented, an extremely rare occurrence among mammals. 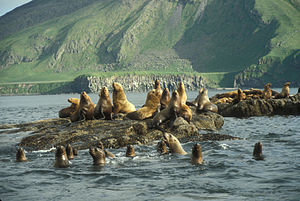 Steller sea lion were hunted for meat and other commodities by prehistoric communities everywhere their range intersected with human communities.[1] Aside from food and clothing, their skin was notably used to cover baidarkas and kayaks. A subsistence harvest on the order of 300 animals or less continues to this day in some native communities in Alaska.[1]

Historically, the sea lion has had only very slight commercial value. For example, in the 19th century their whiskers sold for a penny apiece for use as tobacco-pipe cleaners.[15] Their penises are considered to be aphrodisiacs in some forms of traditional Chinese medicine.

Steller sea lions are sometimes killed intentionally by fishermen[1] as they are seen as competitors and a threat to fish stocks.[1] Killing sea lions is strictly prohibited in the U.S, Canada and Russia, but in Japan, a fixed number are still removed annually ostensibly to protect their fisheries.

In recent years, Steller sea lions have been known to enter the Columbia River estuary and feed on white sturgeon, several salmon species and rainbow trout, some of which are also listed under the U.S. Endangered Species Act. They enter the Columbia River primarily in the late winter and spring, occasionally going as far upstream as Bonneville Dam. Though not as abundant as the California sea lion, they are still a concern for those agencies charged with managing the fish populations. Since the Steller sea lions are themselves protected under the Marine Mammal Protection Act,[1] managers are compelled to use non-lethal deterrence methods such as rubber bullets and noisemakers. Deterrence by the public is strictly forbidden. 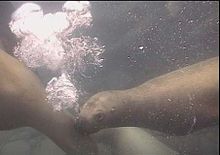 While the populations of the eastern and Asian stocks appear stable, the population in the western stock, particularly along the Aleutian Islands, was estimated to have fallen by 70–80% since the 1970s. As a consequence, in 1990 the western stock of Steller sea lions was listed as endangered and the eastern stock was listed as threatened under the Endangered Species Act.[16][17] They have since been the object of intense study and the focus of much political and scientific debate in Alaska.

One suspected cause of their precipitous decline is overfishing of Alaska pollock, herring, and other fish stocks in the Gulf of Alaska. Other hypotheses include increased predation by orcas, indirect effects of prey species composition shifts due to changes in climate, effects of disease or contaminants, shooting by fishermen, and others. The decline is certainly due to a complex of interrelated factors which have yet to be definitively teased apart by the research effort.[18][19]