The Northern Quarter (N4[1] or N4tr or NQ[2]) is an area of Manchester City Centre, England, generally marked out between Piccadilly, Victoria and Ancoats, and centred around Oldham Street, just off Piccadilly Gardens.

The Northern Quarter is part of a larger area of Greater Manchester that is on a tentative list of nominated sites for UNESCO World Heritage Site Status, a position held since 1999.[3]

Although the town of Manchester existed from medieval times (and had previously been the site of a Roman settlement), the area now designated as the Northern Quarter was not fully developed until the late 18th century.

The area now between Shudehill and Victoria Station was first built upon in the 14th century, as the village of Manchester expanded as a local centre for the wool trade. The expansion of the area was gradual up to the mid-18th century, when Manchester markedly increased in size and significance with the onset of the Industrial Revolution.

During the Industrial Revolution

In the early 18th century, Oldham Street was apparently "an ill-kept muddy lane, held in place on one of its sides by wild hedgerows".[4] The first town directory of Manchester, published in 1772, lists a number of buildings on Tib Street and Oldham Street. By the time of a map by William Green in 1794, the whole of the Northern Quarter is shown as a developed urban district.[5]

John Wesley opened two Methodist chapels in the Northern Quarter. In 1751, a chapel was opened on Church Street (east of High Street at Birchin Lane, formerly Methodist Street). This was upgraded to a larger chapel on Adam Oldham's land in 1781, on the site that is now Methodist Central Hall. John Wesley performed the opening of the first chapel which stood until 1883.[7]

Manchester's first cotton mill was opened by Richard Arkwright in 1783, on Miller Street, near the junction with Shudehill. By 1816, there were 86 mills in the central area of Manchester, and by 1853 there were 108.

By the 1840s, the Northern Quarter was at the centre of one of the most significant economic changes in history, with the Industrial Revolution at full pace and Manchester taking its place as the world capital of the textile industry. In common with the town as a whole, the area became characterised by both wealth and poverty.

The area around Withy Grove and Shudehill is described by Friedrich Engels in The Condition of the Working Class in England as insanitary and down at heel, but markedly more ordered than the area around St Ann's Square, which is also described. Nevertheless, the houses are "dirty old and tumble-down, and the construction of the side-streets utterly horrible".[8] Engels also talks of "pigs walking about in the alleys, rooting in offal heaps".[9]

The area around Oldham Street seems to have been more affluent, with warehouses and shops, many of whose merchants lived within their shop premises. This is described by Isabella Varley, Mrs. Linnaeus Banks, a resident of Oldham Street, in her book The Manchester Man.

One Oldham Street shopowner mentioned by a number of writers is Abel Heywood, who spearheaded the mass distribution of books, supplying the whole country not only with penny novels, but also with educational books and political pamphlets, according to an article in the Morning Chronicle in 1849. Heywood also produced a newspaper, on which he refused to pay duty—a radical gesture, since in those early days of the British Labour Movement, taxes were used to stifle free expression. Heywood became Mayor of Manchester.

Enterprise continued to be the focus of the area through the Victorian age. James Middleton notes that at this time "business was conducted on the old-fashioned lines by people who had been in the street for a long time".[10] Middleton also describes Tib Street as "a perfectly adorable street, where natural history was taught by living examples...birds, dogs, rabbits, poultry displayed in the windows or outside the shops",[10] a tradition which continued for at least a hundred years, having only recently died out with the closing of the last surviving pet shops.

Modern writer Dave Haslam notes something of the birth of the modern Saturday night in the Northern Quarter at this time with "crowds of shoppers and sightseers...most shops were open and the main streets were lit up and packed...there was the added incentive that at midnight the food became cheaper...on a single day in 1870 it was estimated that up to 20,000 people went to Shudehill".[11]

Throughout the Victorian era, Stephenson Square and parts of Oldham Street were known for frequent political speeches and public debates. Haslam notes that a debate in the 1830s between one Dr Grinrod, a Temperance movement activist, and Mr Youil, a brewer, attracted around three thousand spectators.[12] 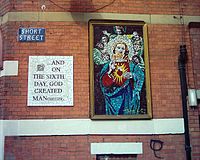 A mural on a wall outside Afflecks, in the heart of the Northern Quarter. The adjacent sign reads "...AND ON THE SIXTH DAY GOD CREATED MANCHESTER"

The development of Smithfield Market and the continued growth of the cotton industry helped to foster economic activity in the Northern Quarter into the 20th century. Middleton describes an area buzzing with hawkers and processions.

Youth culture was the next development in the area that might be recognised today. A street dancing culture emerged in the early part of the 20th century, with "dozens of young people performing polkas, waltzes and schottisches to music provided by Italian organ-grinders".[13]

The cotton trade reached its peak in 1912, when 8 billion square yards (6,700 km²) of fabric were manufactured and sold from Manchester. Following the First World War, the high cost of British cotton, and the increase in production elsewhere in the world, led to a slow decline of the British cotton industry. In the 1960s and 1970s, mills were closing in Greater Manchester at a rate of almost one a week, and by the 1980s only specialised textile production remained, although clothing manufacture and the wholesale trade continue to form a strong part of Manchester's economy.

Following the Second World War, attention focused away from the Northern Quarter as Manchester began to build itself a modern city centre in the ruins left by German bombers. As a commercial area, Oldham Street became quieter, particularly as nearby Market Street and the Arndale Centre grew in importance. Over time certain types of business were attracted to the area, which offered low rents and an alternative feel to the typical British high street. This became the main strength of the Northern Quarter — today it is known for hip, independent stores, cafes and bars, and for offering a distinct alternative to the shopping experiences to be found elsewhere in Manchester city centre.

For Dave Haslam, the Northern Quarter became the last refuge of the Manchester music scene in the 1990s: "A community, of sorts, had developed around music-makers wedded to experimentalism, from Andy Votel to Waiwan, nurtured at club nights such as Graham Massey's Toolshed and Mark Rae's Counter Culture ... In 1992, Frank Schofield and Martin Price (of 808 State) had lamented the fate of the independent record shop, yet within five years there were several new record shops in the Northern Quarter".[14]

The Northern Quarter is today popular for its numerous bars and cafes as well as its mix of music and clothes shops. Amongst these is Affleck's Palace, a former department store which has been turned into a multi-storey bazaar for alternative clothing and nick-nacks.

Meanwhile, the area is something of a mecca for DJs, with shops such as Piccadilly Records, Vinyl Exchange, Vox Pop Records, Beatin' Rhythm, Eastern Bloc Records (formerly owned by Martin Price of 808 State, then by Pete Waterman) and, until 2009, Fat City Records (formerly run by Mark Rae). The Northern Quarter as a whole is characterised by its offbeat, alternative atmosphere. During the daytime, trendy hangouts include Cafe Pop (a cafe and shop selling retro clothing and household goods) and the Basement (a vegan cafe and meeting place).

Nightlife in the Northern Quarter includes music venues The Night and Day Café, Band on the Wall, the Roadhouse and The Ruby Lounge, The Mint Lounge where Clique (Manchester Evening News' "Club Of The Year 2010") and Funkademia are based, Matt and Phred's Jazz Club, the Frog and Bucket comedy club, the Northern Nightclub and several traditional pubs, as well as a number of restaurants. The area is also famous for its bar scene, which is constantly evolving; well established Northern Quarter bars include Dry 201 (formerly owned by New Order), Cord, Centro, Common, Odd, Bluu, TV21 and Trof.

The area is also known as a home to the creative industries, and in particular fashion design, with various designers, agencies, and clothing wholesalers populating its back streets. There are also a number of commercial art galleries in the area.

Between World War II and the 1990s, the Northern Quarter was not considered to be a residential area, but in recent years, Manchester City Centre has become more and more fashionable as a place to live. Although no official figures are kept (the Northern Quarter is not recognised for administrative purposes), it might be estimated that a little over 500 people now live in the area.

In November 2010 the area was awarded the Great Neighbourhood of the Year Award 2011 for Britain and Ireland at the Academy of Urbanism Awards in London.[15]

Piccadilly Basin is a redeveloped area between Manchester Piccadilly station and Great Ancoats Street. The area includes new flats and offices, and has been home to one of the first UK stores of the Danish furniture retailer ILVA (whose UK business went into administration in June 2008). New bars include Moon, from the owners of the Canal Street venue Taurus, and Lamar's, a bar and restaurant that has been styled as a tribute to the late Frank "Foo Foo Lamar" Pearson, owner of the former cabaret bar, Foo Foo's Palace, on Dale Street.[16]

Another area of redevelopment in the Northern Quarter is a mixed office and residential development centred around the old market on Shudehill near to the new Manchester bus and tram interchange. Bars located in this area include a franchise of the national chain Bluu, as well as Odd Bar, Trof Northern Quarter, The Bay Horse, Socio Rehab and Keko Moku.