Northern Lights (Russian: Сияние северa) is a natural gas pipeline system in Russia and Belarus. It is one of the main pipelines supplying north-western Russia and is an important transit route for Russian gas to Europe.[1]

The Northern Lights pipeline system was built in the Soviet Union from the 1960s to 1980s. Construction of the Vuktyl–Ukhta–Gryazovets–Torzhok section started in 1967 and was completed in 1969. By 1974, the pipeline had been extended to Minsk .[2] The second main trunk line was added during the 1970s and by 1985, a third main trunk line had been built.[3] Originally, gas was supplied by the Vukhtyl gas field, but later the pipeline was extended in order to connect with the Urengoy gas field. 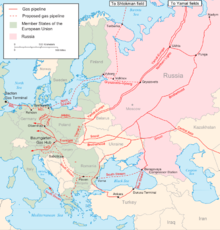 Gas pipelines from Russia to Europe

The system from Torzhok to the West consists of five major trunk pipelines:[1][5]

This part of the system has 6 compressors stations. Its technical input capacity is 51 billion cubic meters (bcm) per year; however, due to the age of the pipeline system, its operational capability is estimated to be 46-48 bcm per year. In 2007, it transported 39 bcm of gas; 20.6  bcm to Belarus for domestic supply and 18.4 bcm for transit to Europe. The total amount of Russian gas transmitted through Belarus to Europe was 70.1 bcm in 2007.[1]