The Northern Branch Corridor Project is a proposed 11-mile long rail line that would offer a mass transit rail option to residents of eastern Bergen County, New Jersey, United States, that has been unavailable for decades since passenger rail service ended on the Northern Branch in 1966 and the West Shore Line in the 1950s.[1] Currently, the track is a lightly used, stub-ended freight rail line owned by CSX Transportation.

Originally, New Jersey Transit and transportation advocates proposed that the Hudson-Bergen Light Rail be extended onto the tracks of the Northern Branch, which could provide single seat access between Bergen County and Hudson County municipalities along the Hudson River. However, cost considerations led NJ Transit to consider alternative methods to provide the rail access. Because light rail cannot operate concurrently with freight service, the early plans would have required installation of additional track or scheduling freight traffic late at night or on weekends. Light rail would also require installation of catenary above the tracks and the required substations to feed those wires. 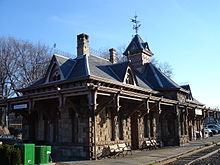 The Tenafly Station in December 2006

NJ Transit was studying proposals for rail service, using FRA-compliant diesel multiple unit (DMU) vehicles.[1] DMUs would use the existing trackage and would minimize interference with freight service on the line. The DMUs would operate along the old Northern Railroad line and terminate in Tenafly in central Bergen County.

If built, this would have been essentially a separate service, with stations on the reborn Northern Branch heading south from Tenafly located in Englewood, Leonia, Palisades Park, Ridgefield and Fairview before ending in North Bergen, with a transfer station to the HBLR called North Bergen Junction.

On February 13, 2006, NJ Transit has received $3.6 million in federal funding to conduct engineering and environmental studies.

The alternative came under criticism from rail transit advocates, who argued that the plans to use DMUs would force a transfer for Bergen County commuters, and would not be efficient. They argued that the original plans should be implemented instead.[2]

The proposal to use (DMU) vehicles instead of electrically powered light rail was dropped when the manufacturer of the DMU Colorado Railcar went bankrupt.

The current proposal for the extension will utilize electrically powered light rail. The estimated cost of the project is $900 million. Currently $40 million have been allocated to the project. The project is expected to begin in 2012 and be completed in 2015.[3] The branch is estimated to have 24,000 passengers daily. The project is currently awaiting approval of an environmental impact statement and Federal Transit Administration approval.[4]