Northern Basin and Range ecoregion
This article is about the ecoregion designated by the EPA. For the associated geographical feature, see Great Basin. 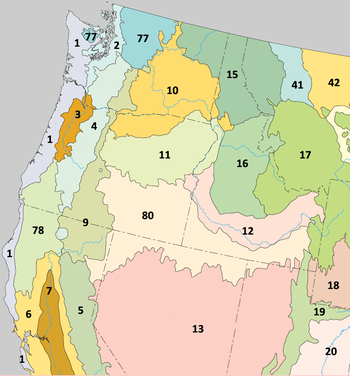 The Northern Basin and Range ecoregion is a Level III ecoregion designated by the United States Environmental Protection Agency (EPA) in the U.S. states of Oregon, Idaho, Nevada, Utah, and California. It contains dissected lava plains, rolling hills, alluvial fans, valleys, and scattered mountain ranges in the northern part of the Great Basin. Although arid, the ecoregion is higher and cooler than the Snake River Plain to the north and has more available moisture and a cooler climate than the Central Basin and Range to the south. Its southern boundary is determined by the highest shoreline of Pleistocene Lake Bonneville, which once inundated the Central Basin and Range. The western part of the region is internally drained; its eastern stream network drains to the Snake River system.[1][2][3][4]

The valleys support sagebrush steppe or saltbush vegetation. Mollisol soils are common, in contrast to the aridisols of the Central Basin. Juniper-dominated woodland occurs on rugged, stony uplands. The mountain ranges are covered in mountain sagebrush, Idaho fescue, Douglas-fir, subalpine forests, or aspen. Today, most of the region is used for livestock grazing. Dryland and irrigated cropland are found in some areas, but in general the soils are less suitable for agriculture than those in the Columbia Plateau and the Snake River Plain ecoregions. Most public lands in the region are managed by the Bureau of Land Management.[1][2][3][4]

The Northern Basin and Range ecoregion has been subdivided into fourteen Level IV ecoregions, as described below. Level IV mapping is not yet complete in California, and the information below includes only the sections in Oregon, Idaho, Nevada, and Utah.

Level IV ecoregions in the Northern Basin and Range in Oregon, Idaho, Utah, and Nevada. Contiguous areas in California have not been mapped yet. (Full map).

The Dissected High Lava Plateau ecoregion is a broad to gently rolling basalt plateau cut by deep, sheer-walled canyons, with perennial and intermittent streams draining to the Snake River. Elevation varies from 4,000 to 7,300 feet (1,219 to 2,225 m). The region is less wooded, lower, and more arid than neighboring subregions in the Northern Basin and Range. It differs from sagebrush-dominated regions in the Central Basin and Range in having higher precipitation and colder winters. Potential natural vegetation is mostly sagebrush steppe; Wyoming big sagebrush and black sagebrush are abundant, as well as Douglas rabbitbrush, Idaho fescue, bluebunch wheatgrass, western wheatgrass, Thurber's needlegrass, bottlebrush squirreltail, Great Basin wildrye, Sandberg's bluegrass, Indian ricegrass, and cheatgrass. Juniper-pinyon woodlands grow on rocky and gravelly uplands. Understory species are denser and biological soil crusts tend to be more extensive and in better condition than at similar elevations in the Central Basin and Range. Cheatgrass has replaced depleted bunchgrasses in overgrazed areas. One of the largest Northern Basin and Range subregions, the Dissected High Lava Plateau covers 5,364 square miles (13,893 km2) in Idaho, 3,984 square miles (10,319 km2) in Oregon, 3,537 square miles (9,161 km2) in Nevada, and 412 square miles (1,067 km2) in Utah, including much of the Owyhee Desert. It is primarily used for rangeland and wildlife habitat. Contiguous areas in California have not been mapped yet.[1][2][3][4]

Semiarid Hills and Low Mountains (80b)

The Semiarid Hills and Low Mountains ecoregion is higher and more rugged than the sagebrush plains and basins of neighboring regions. It is composed of unglaciated mountain slopes, hills, and alluvial fans at an elevation of 4,600 to 9,000 feet (1,402 to 2,743 m). The region is covered by mountain big sagebrush, low sagebrush, and associated grasses and understory plants, including bluebunch wheatgrass, Sandberg bluegrass, Great Basin wildrye, Indian ricegrass, cheatgrass, Idaho fescue, needle-and-thread grass, snowberry, and serviceberry. Scattered juniper woodlands grow on shallow and rocky soils. These hills represent the northern limit for both pinyon and Utah juniper; western juniper replaces them to the west and north. Groves of aspen grow on alluvial fans and along stream networks, with some lodgepole pine and Douglas-fir. Geyer willow and Booth willow are also present in riparian areas. The region includes streams that have been designated for protection as critical or high priority habitat for Yellowstone cutthroat trout and other fish. Water quality has been lightly to moderately degraded by human activities, such as historic gold mining and livestock grazing, which is the primary land use today. The ecoregion covers 3,567 square miles (9,238 km2) in Idaho, 1,011 square miles (2,618 km2) in Nevada, and 479 square miles (1,241 km2) in Utah, including Shoshone and Bannock land on the Fort Hall Indian Reservation and public land within the Sawtooth and Caribou-Targhee national forests.[2][3][4]

The Owyhee Uplands and Canyons ecoregion is a sagebrush steppe containing deep river canyons, barren lava fields, badlands, and tuffaceous outcrops that are riddled by caves. Elevation varies from 2,500 to 6,600 feet (762 to 2,012 m). Although the region's climate and vegetation are similar to the Dissected High Lava Plateau, its lithology is more varied, stream density is higher, and water availability is greater. These attributes, combined with its remote location, make the region a particularly valuable refuge for wildlife. The steppe is characterized by Wyoming big sagebrush, basin big sagebrush, Douglas rabbitbrush, bluebunch wheatgrass, Idaho fescue, bottlebrush squirreltail, Sandberg's bluegrass, and cheatgrass. Rocky areas support scattered western juniper. It is mostly used for rangeland and wildlife habitat, with some hay and small grain farming. Cheatgrass has replaced depleted bunchgrasses in overgrazed areas. The region covers 2,991 square miles (7,747 km2) in Oregon and 1,293 square miles (3,349 km2) in Idaho, including Lake Owyhee and the Owyhee, Malheur, and Succor drainages.[1][2]

The Saltbush-Dominated Valleys ecoregion, externally drained by the Snake River, is composed of gently sloping valley bottoms and alluvial fans dominated by salt-tolerant vegetation that distinguishes it from the sagebrush steppe of surrounding regions. Elevation varies from 4,500 to 6,000 feet (1,372 to 1,829 m). Light-colored soils with high salt and alkali content are common; they are dry for extended periods and may be leached of salt by irrigation water. Potential natural vegetation is mostly saltbush-greasewood, featuring Nuttall sagebrush, squirreltail, shadscale, winterfat, and greasewood. Basin sagebrush, Wyoming big sagebrush, bluebunch wheatgrass, needlegrass, bluegrass, and Indian ricegrass are also present. The region covers 438 square miles (1,134 km2) in Idaho and 52 square miles (130 km2) in Utah, in the Raft River drainage. The land is used primarily for rangeland and irrigated agriculture.[2][4]

The Sagebrush Steppe Valleys ecoregion consists of gently sloping, unforested terraces, basin rims, valley bottoms, footslopes, bajadas, and alluvial fans, with an elevation of 4,600 to 6,500 feet (1,403 to 1,981 m). Less rugged than the surrounding hills and mountains, it is dominated by sagebrush grassland and lacks the woodlands, open conifer forests, and saltbush–greasewood vegetation of neighboring regions. The valleys drain mostly to the Snake River and fish assemblages are unlike those of the internally drained basins to the south. Potential vegetation includes bluebunch wheatgrass, Wyoming big sagebrush, cheatgrass, and Sandberg bluegrass. The steppe valleys are less suitable for cropland agriculture and have less available water than many parts of the Snake River Plain, but non-irrigated wheat and barley farming is common. The region covers 1,865 square miles (4,830 km2) in southeastern Idaho and 7 square miles (18 km2) across the Utah border.[2][4]

The Barren Playas ecoregion includes the playas and sand dunes of Summer Lake, Silver Lake, and the Alvord Desert, three of the most arid areas in Oregon. Elevation varies from 4,500 to 5,000 feet (1,372 to 1,524 m), with a local relief of less than 100 feet (30 m). On the playas, lake levels and salinity fluctuate seasonally and yearly. Playas are ponded during wet intervals and eroded by wind when dry. Surface material is clayey, saline, alkaline, and poorly drained. Sand dunes and mud flats occur. This region is mostly barren; vegetation, where present, is sparse and composed of very salt-tolerant plants, such as alkali sacaton and black greasewood. The region covers 179 square miles (464 km2) in Oregon. It is nonarable and is used for recreation and migratory bird habitat.[1]