North Sikkim (Nepali: उत्तरी सिक्किम) is a district of the Indian state of Sikkim. Its district headquarters is Mangan. It is the seventh least populous district in the country (out of 640).[1]

The district is the largest of the four districts of Sikkim.

The landscape is mountainous with dense vegetation all the way up to the alpine altitude before thinning out to desert scrub towards the Northern Tundra. Numerous waterfalls astride the main road make the trip to this district extremely picturesque.

The most prominent effect of the steepness of the valleys is the prevalence of landslides that at times drop to anything between 3000 to 5,000 ft (1,500 m) carrying devastation along their course. Most of them are caused either by the melting snow beds on top of the mountains or by erosive action of the rains.

Most of the people of the state reside near Mangan, the district headquarters which is about 2,000 feet (610 m) above sea level. Further north the elevation increases with the vegetation turning from temperate to alpine to tundra. Temperatures range from about 25° to below -40° in the extreme high reaches where the altitude is in excess of 6,000 metres. Kanchenjanga is the highest peak at over 8,000 m, straddling its eastern border with Nepal and can be seen clearly from the town of Singhik.

Mangan is known as the Cardamom Capital of the world. The climate and terrain best suit the cultivation of the larger variety of Cardamom here.

The region has many power projects and enjoys almost uninterrupted electricity. The steep gradient and the innumerable lakes on the higher reaches facilitate ideal conditions for generation of hydro electric power.

In 2006 the Ministry of Panchayati Raj named North Sikkim one of the country's 250 most backward districts (out of a total of 640).[2] It is the only district in Sikkim currently receiving funds from the Backward Regions Grant Fund Programme (BRGF).[2]

Most of North Sikkim is restricted to travelers and permits are needed to visit these areas. The area, which shares a sensitive border with the People's Republic of China is heavily patrolled by the Indian army. However, in view of exquisite scenic beauty, a large number of tourists have started visiting the region overcoming all sorts of hardship. Often unregulated tourism becomes a major conservation issue in fragile ecosystem such as high mountains.[3] 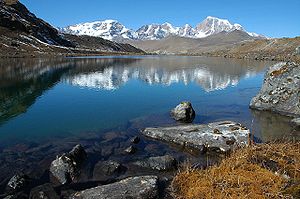 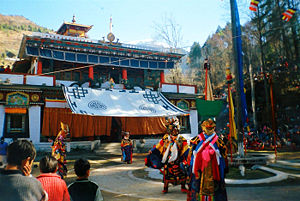 Gumpa dance at Lachung monastery
Scenes from the district 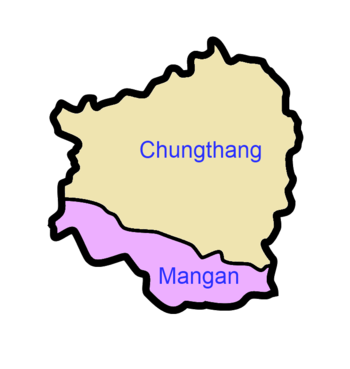 The people are mainly of Nepali descent. Other ethnic groups include the Lepcha and Bhutia communities. Nepali is the most widely spoken language in the district. It also has one of the lowest populated regions of the state.

Roads are in a poor condition owing to the frequent landslides.

North Sikkim is home to the Red Panda (Ailurus Fulgens), a vulnerable species.[8] This animal is the pride of Sikkim and is also the State Animal. It is generally found between heights of 2000 m to 4000 m. It is as big as a domestic Siamese cat (approximately 2 ft long), has a triangular shaped face with a stripe on its cheek, with red fur and black eyes. It has a sprinkling of white on its back and chest. The tail is bushy, black or brown in color and long like that of a skunk. They generally live on treetops.