The North Rhine-Westphalia state election, 2010, was an election held on May 9, 2010, to elect members to the Landtag (state legislature) of the German state of North Rhine-Westphalia. The incumbent government at the election was the Christian Democrat (CDU)–FDP administration of Minister-President Jürgen Rüttgers. The main opposition was the Social Democrats (SPD), led by Hannelore Kraft since 2005.

As the election was held in Germany's most populous state, it was seen as a test of the federal government's performance after seven months in office. The federal government, also a CDU-FDP coalition, was accused of being indecisive as the two coalition partners had different aims.[3] As the Bundesrat (upper house) is made up of representatives from the states, the federal government risked losing its narrow majority in that house.[4]

Other factors in the election were the proposed EU bailout of Greece as well as a fundraising scandal in the governing party and debate over the state's education policy.[5]

The election was conducted on a mixed member proportional representation basis, with 128 constituency or local electorate seats, and the remaining seats filled by party lists from the overall proportion of votes received by each party. The CDU won 67 and the SPD won 61 constituency seats. Unlike the 2005 state election, no overhang seats were required, so the number of seats to be filled was 181 (down from 187), the lowest number of members required by the state's Electoral Act.

The turnout of 59.3% was the second lowest at a NRW state election (the lowest being the 2000 election, at 56.7%.) Both major parties did poorly — the CDU achieved its worst ever result, while the SPD achieved its worst result since 1950. It was also the first election since 1950 where a left-wing party had won seats. 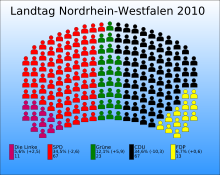 The new composition of the Landtag 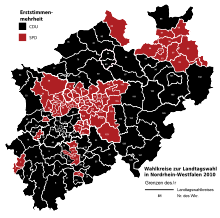 The following opinion polls were conducted during the campaign[6]:

The result of the election was a hung parliament, with the CDU and SPD each securing 67 of the Landtag's 181 seats. This represented a significant decline in the CDU's fortunes, and its worst ever result at an election in North Rhine-Westphalia — however, the SPD, to a lesser extent, also lost votes and seats. The main beneficiaries of the election were parties to the left of the SPD — the Greens and Die Linke, the latter winning seats for the first time.[10] Ultimately, after various coalition options were exhausted, the SPD and Greens formed a minority coalition which was affirmed by the Landtag on July 14, 2010, and Kraft succeeded Rüttgers as Minister-President.

The final composition of the ultimate government coalition took two months to determine. Neither of the traditional coalitions (SPD-Green or CDU-FDP) has sufficient numbers to command a majority, so the most likely results according to analysts are a grand coalition, a coalition between the left-of-centre parties, or a coalition between the SPD, Greens and the FDP.[10] On May 15, 2010, the FDP declined an offer from the SPD and the Greens to enter talks, saying the offer "obviously lacked seriousness" as they had on the same day made a similar offer to Die Linke.[11] By May 23, 2010, negotiations between Die Linke and the SPD-Green group appeared to have broken down.[12] This prompted the FDP to re-enter negotiations with the SPD-Greens (which, if successful, would result in a traffic light coalition), whilst grand coalition talks with the CDU also continued.[13]

In ensuing weeks, the SPD and Greens negotiated a deal for minority government, and on July 14, the Landtag formally elected Kraft as Minister-President.[14]