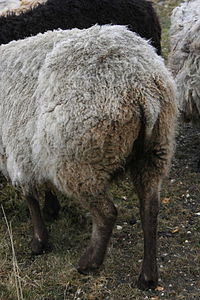 Northern European short-tailed sheep are a group of sheep breeds and landraces from the British Isles, Scandinavia, and the area around the Baltic. They are thought to be derived from the first sheep brought to Europe by early farmers. They are hardy sheep, adapted to harsh environments, but they are small and have been replaced in most areas with later types of larger, long-tailed sheep.

These sheep are generally small and have characteristic short "fluke-shaped" tails, broad at the base and tapering to a hair-covered tip; the tails typically have 13 vertebrae compared with over 20 for other sheep; in most types the tail vertebrae are also shorter than those of long-tailed sheep. Their faces and legs are free of wool. The horns vary between breeds and often within them: they may be horned in both sexes, horned only in the male or polled in both sexes. Some types (such as Manx Loaghtan and Hebridean) can have more than one pair of horns.

They may be solid-coloured (commonly white, black or moorit – reddish-brown) or patterned, and white markings may also occur over other colouration. Some (such as Shetland and Icelandic) include a very wide range of colours and patterns. Some types moult naturally in spring, allowing their fleece to be rooed (plucked) rather than shorn. Twin births are frequent, with some (such as the Finnsheep, Romanov and Icelandic) often giving birth to "litters" of three, four or even more lambs. Breeding is usually seasonal, with lambs being born in spring or early summer.

Most types are very hardy and agile, being adapted to grazing rough vegetation in wet and cool climates, and they often have a strong preference for browsing. The North Ronaldsay is adapted to living largely on seaweed.

It is thought that the first sheep brought to Europe by early farmers were short-tailed sheep. Initially, in the Neolithic Age, these were small, double-coated, naturally-moulting brown sheep, of which the Soay is believed to be a relict. By the Iron Age these had been replaced throughout northern and western Europe by somewhat larger sheep, still short-tailed, but with a fleece of more uniform texture, variable in colour.

From the mid-nineteenth century (and especially after the middle of the twentieth century), some of the surviving short-tailed breeds became recognised as worthy of preservation for curiosity, for cultural reasons, as ornamental animals, or for conservation of genetic diversity. About thirty breeds or landraces of these sheep now survive.