Varsity ice hockey at North Dakota began in 1929 as a NCAA Division I independent team with no recorded coach. After four seasons the team disbanded during the heart of the Great Depression in 1936.[1] The program restarted after World War II with John Jamieson as the first coach. The 1946-47 season was the first winning season in Fighting Sioux history with a record of 7 wins, 6 losses, and 0 ties.[1] The Fighting Sioux joined Michigan Tech, Colorado College, University of Denver, University of Michigan, Michigan State University, University of Minnesota as founding members of the Midwest Collegiate Hockey League (MCHL) in 1951.[2] In the program's first season in league play the Fighting Sioux finished with a record of 13-11-1.[1] After two seasons the MCHL became the Western Intercollegiate Hockey League (WIHL) and later in 1959 became the Western Collegiate Hockey Association.[2] Artificial ice was installed in UND’s Winter Sports Building, commonly known as "The Barn", in 1953.[3]

Bob May became the 5th coach in Fighting Sioux history for the 1957-58 season and led the team to the 1957-58 WIHL Regular Season Championship. The Sioux also received a bid to the 1958 NCAA Division I Men's Ice Hockey Tournament. The team advanced to the championship game with a 9-1 win over Harvard in the semi-final round. The Sioux fell in their first championship and post season tournament appearance to University of Denver 2-6.[4] Following the 1957-58 season the WIHL broke up, after Michigan, Michigan State, Michigan Tech, and Minnesota left the conference following a dispute over recruiting practices.[5] Despite not violating the WIHL or the NCAA's rules of the period, the four exiting schools accused Denver, North Dakota and Colorado College of breaking an gentlemen's agreement by recruiting overage Canadians.[5]

Without a conference UND competed as an independent Division I team for the 1958-59 season. Barry Thorndycraft took over for May as head coach but continued the winning tradition established in the previous season. The Fighting Sioux again reached the NCAA Tournament for the second straight season and again advanced to the championship with a 4-3 overtime win over St. Lawrence.[6] UND beat former WIHL member Michigan State with another 4-3 overtime victory to win the university's first ice hockey national championship.[6] The Sioux ended with a record of 20-10-1 on the season.[1] 1959 marked the official founding of the Western Collegiate Hockey Association (WCHA) and after three seasons in the WCHA the Sioux returned to the national stage for the 1963 NCAA Tournament held in Chestnut Hill, Massachusetts at the McHugh Forum.[7] North Dakota blew away the hometown Boston College Eagles 8-2 and won the school's second ice hockey championship with a 6-5 win over rival Denver.[7] The team finished with a record of 22-7-3 and coach Thorndycraft was named WCHA Coach of the Year for 1962-63.

Thorndycraft left the program in 1964 and under new coach R.H. "Bob" Peters, the Sioux won the MacNaughton Cup for the WCHA regular season championship in 1964-65.[1] The team advanced to the 1965 NCAA Tournament but lost 3-4 in the semi-final round to Boston College.[8] Bill Selman became coach in 1966 and led the team to their third MacNaughton Cup in history and a spot in the 1967 NCAA Tournament. The Sioux's run ended with a 1-0 loss to Cornell 0-1 but Selman received the 1966-67 WCHA Coach of the Year award.[9] The following season the Sioux received an at-large bid to the 1968 NCAA Tournament. North Dakota beat Cornell 4-1 in a rematch of the 1967 semi-final game. The Sioux advanced to the National Championship game for the first time since winning it 5 seasons earlier in 1963. The Sioux again found themselves in the National Championship game matched up with conference rival Denver, North Dakota would fall to the Pioneers 0-4.[10] Rube Bjorkman became the 9th coach in program history after previously serving as head coach at the University of New Hampshire. Over the 10 seasons as coach the Fighting Sioux finished with two winning seasons, one in his first season as UND coach in 1968-69 and a second in 1971-72.[1] During his tenure as UND coach Bjorkman compiled a record of 149–186–11.

John "Gino" Gasparini was hired in 1978, Gasparini played for the Fighting Sioux from 1964-67 before a short stint in the International Hockey League then returning to UND under Bjorkman as an assistant coach. Gasparini's impact was immediate and the Fighting Sioux finished the regular season winning the MacNaughton Cup and advancing to the 1979 NCAA Tournament. North Dakota picked up a 4-2 victory of Dartmouth in the semi-final round but fell in the national championship game to Minnesota 3-4.[11] North Dakota finished the season with a record of 30-11-1, the program's first 30-win season, as well as Gasparini being named WCHA Coach of the Year.[1] The 30 wins of the 1978-79 season was eclipsed the following season when North Dakota picked up 31 wins and the programs third National Championship with a 5-2 win over Northern Michigan.[12] North Dakota returned to the NCAA Tournament in 1984. North Dakota swept Rensselaer two games to none in the quarter final round but fell 1-2 in overtime to Minnesota-Duluth[13]

The 1986-87 season the Sioux swept through the WCHA winning the MacNaughton Cup and WCHA Final Five Tournament.[1] The Fighting Sioux advanced to the 1987 NCAA Tournament sweeping St. Lawrence in two games by a combined score of 9-4 and advancing to the Championship with a 5-2 win over Harvard.[14] North Dakota won their fifth NCAA Division I National Championship when the Fighting Sioux defeated Michigan State Spartans in front of a Spartan crowd in Detroit, Michigan on March 28, 1987.[14] The team would make the NCAA Tournament one more time with Gasparini behind the bench in 1990 but fell in the regional round of the expanded NCAA Tournament when the team lost to Boston University two games to one in the best of three series.[15] 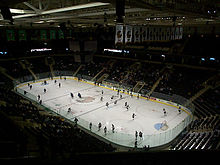 After four quiet years, Dean Blais took over as head coach of North Dakota after John "Gino" Gasparini in 1994. In his third season as head coach, Blais led the Fighting Sioux to the program's eighth MacNaughton Cup for WCHA regular season champions and fifth Broadmoor Trophy for WCHA playoff champions.[1] UND advanced to the Frozen Four after a 6-2 victory over Cornell in the quarterfinal round. The Fighting Sioux then advanced to the National Championship with a 6-2 win over Colorado College. Under Blais, the Sioux won 6-4 over Boston University to win the school's Six National Championship.[16][17] That same season Blais was named recipient of the Spencer Penrose Award for Division I College Coach of the Year.[18]

North Dakota returned to the NCAA Tournament in 1998 and 1999 but were plagued with early-round exits. In the 1999-2000 season, after again winning the WCHA Tournament, UND advanced through the 2000 NCAA Tournament to the Championship against Boston College, looking for its first NCAA title since 1949. BC had a 2-1 lead entering the third period, but the Fighting Sioux responded with three goals, with two by Lee Goren. Goren tied the game, assisted on Jason Ulmer's game-winning goal, and then scored into an empty Eagles net in the last minute of play to secure the game. It marked North Dakota's seventh national title overall and second since 1997, and was also the third time in three years that BC came up short in the Frozen Four.[19] Boston College got its revenge over the Fighting Sioux the following season when the two teams again faced each other in the National Championship. BC won its first national title since 1949 by defeating North Dakota, 3–2, in overtime on a goal scored by sophomore forward Krys Kolanos just 4:43 into OT.[20][21]

Fighting Sioux vs. Denver in the 2008 WCHA Final Five

On July 9, 2004, Dave Hakstol was announced as the 15th coach in program history, replacing Dean Blais who left UND when he was named associate coach of the Columbus Blue Jackets. Blais served as UND head coach for 10 seasons and placed first among active coaches with a record of 262-115-13 and a .733 winning percentage.[18][25] With Hakstol behind the bench, the Sioux continued their winning tradition that was prevalent under Blais. UND won 4-3 in overtime vs. Maine on October 8, 2004 to give Hakstol his first win as head coach.[26] The Sioux received an at-large bid to the 2005 NCAA Tournament and found themselves in the Championship against long-time rival University of Denver.[27] DU freshman goaltender Peter Mannino backstopped an offensive attack that included a 2-goal game by DU forward Paul Stastny to hand UND a 1-4 loss.[28]

North Dakota made and advanced in the next three NCAA Tournaments but came up with third place finishes in the Frozen Four, losing to Boston College three straight seasons in a row. In 2006 losing 5-6 to the Eagles,[29] in 2007 falling 4-6,[30] and in 2008 losing 1-6.[31] Despite the third consecutive loss to BC in the Frozen Four, the seasons ended on high notes in 2006-07 when sophomore forward Ryan Duncan became the second Fighting Sioux player to win the Hobey Baker Award and the first in 20 seasons after Tony Hrkac in 1986-87.[3] The 2007-08 season was only the second time in UND Hockey history that North Dakota had two finalists for the Hobey Baker Award when junior forward T.J. Oshie and senior goalie Jean-Philippe Lamoureux; the other time in 2004 when Zach Parise, Brandon Bochenski were nominated.[3]

In March 2009 the Sioux won a WCHA-leading 14th league championship with a 2-1 win at Wisconsin. The team advanced to the 2009 NCAA Tournament but fell in the Northeast Region semifinal to New Hampshire 5-6 in overtime after UNH's Thomas Fortney scored with :00.1 remaining in regulation to force ot and UNH's Josh LaBlanc scored 45 seconds into overtime.[32] The Fighting Sioux capped off the 2009-10 regular season and won the 2010 WCHA Men's Ice Hockey Tournament to receive an automatic bid to the 2010 NCAA Tournament. UND fell in the Northeast Regional semifinals to Yale 2-3 after The Bulldogs scored 3 goals in a span of 4:57 during the second period and Yale goaltender Ryan Rondeau stopped 34 UND shots.[33]

In March 2011 the Sioux captured its WCHA-leading 15th league championship with an 11-2 win at Michigan Tech.[34] The team advanced as the #1 seed into the 2011 WCHA Tournament by beating #12 seed Michigan Tech (8-0, 3-1).[35] The Sioux advanced to the 2011 WCHA Final Five to play Colorado College in the WCHA semi-final and won with a late 3rd period goal by Matt Frattin to advance them to the WCHA Championship.[36] The Sioux then faced rival Denver for the Broadmoor Trophy. Denver took to the early lead 1-0 at 5:06 of the first period, the Sioux rallied at 2:32 of the second period and struck again at 8:18 of the second period. Denver tied it up at 17:47 of the third period to force the game into overtime. Frattin scored the game winner at 5:11 of the second overtime to claim North Dakota's 2nd as many seasons and 9th Broadmoor Trophy overall for the Sioux.[37] The team advanced to the 2011 NCAA Tournament Midwest Regional in Green Bay, Wisconsin. At the Midwest Regional, the Sioux faced off first against Rensellear Polytechnic Institute (RPI), where they shut out the Engineers 6-0, advancing to play WCHA rival Denver for the second straight weekend. The Sioux defeated the Pioneers of Denver 6-1 in the Midwest Regional Final to advance to their fifth Frozen Four in 8 seasons under Dave Hakstol. In the NCAA Frozen Four, the Sioux would see their highly anticipated season come to an end with a 0-2 shutout to the Michigan Wolverines.

This is a partial list of the last six seasons completed by the Sioux.

Record vs. other major opponents

Over 250 Fighting Sioux alumni have gone on to play professional ice hockey, including a number of current and former NHL players:[40]