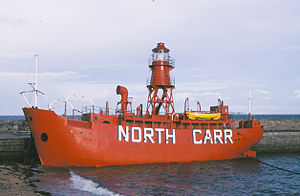 The North Carr Lightship moored at Anstruther in 1988

The purpose of the vessel was to warn mariners by sight, light or sound of the dangers of the North Carr rocks which are situated 1.7 miles off Fife Ness at the turning point for vessels entering the Forth from the North and bound for the Tay. The North Carr is currently berthed in the Victoria Dock, Dundee, awaiting restoration as an exhibition space.

She was built by A. & J. Inglis Ltd, Pointhouse Shipyard, Glasgow in 1932, and launched in April 1933. In service she was anchored off Fife Ness until 1975. From then she served as a tourist attraction in Anstruther Harbour. She is the third and last vessel to carry the name - the first was borrowed from Trinity House London the English counterpart of Northern Lighthouse Board. The second was purpose built in Dundee, reported to have sat so low in the water that her decks were always awash and the only way up to the light was up a rope ladder in the rigging - no mean feat at the best of times.

She created quite a stir in Edinburgh on account of her fog horn being tested while lying at ¾ mile outside Granton in the Firth of Forth. As the fog horn had a range of approximately 10 miles, north Edinburgh could hear it loud and clear and the complaints to the Office, Newspapers and Police were numerous - particularly as it was being sounded in clear weather. "Hundreds of city dwellers have had no sleep over three consecutive nights"; "The most flagrant individual breach of the peace is as nothing compared with the ceaseless boom and consequent suffering of the past three nights"; "Firth of Forth torment"; "An Edinburgh grievance which has left rankling memories in the selection of Granton for the fog horn test" were typical of statements made and written at the time.[1]

On 8 December 1959, the lightship was the subject of a tragic rescue mission. After the lightship broke her moorings and began to drift in heavy seas, the Broughty Ferry lifeboat (The Mona) was launched. Her crew of eight was lost when the Lifeboat capsized. The Lightship and its crew survived and after repair was towed back to its station.

The lightship was used as a museum in Anstruther for years after she left service. She was saved from the scrapyard in 2010 and funds are being sought by the Taymara charity to restore her as an exhibition space on the Dundee waterfront.[2]