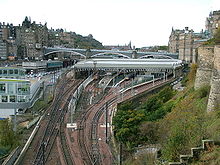 North Bridge, above Waverley Station, from the East

North Bridge is a road bridge and street in Edinburgh linking the High Street with Princes Street, and the New Town with the Old. The current bridge was built between 1894–97. A previous North Bridge, built from 1763–72, stood until 1896.

The current North Bridge is 525 feet long and has three spans of arched girders each 175 feet in length. It is 75 feet wide. It was constructed from 1894–7 by Sir William Arrol & Co.,[1] which company is also noted for construction of the Forth Bridge.

Situated on the bridge is a war memorial, by sculptor William Birnie Rhind which memorialises soldiers of the King's Own Scottish Borderers killed in campaigns between 1878 and 1902.[5]

At the southern end of the bridge (where it meets the Royal Mile and South Bridge, in the Old Town) are substantial buildings whose main entrances are at carriageway level but which also have entrances in the valley below. Those on the west side are The Scotsman Hotel, former headquarters of The Scotsman newspaper, alongside a block of commercial premises and flats ("Royal Mile Mansions"). That on the east housed Patrick Thomson's department store from 1906 until 1976 when its then owner the House of Fraser rebranded it as Arnotts department store. The store closed in 1981,[6] and the building was redeveloped as a hotel and smaller shops.

At the northern end of the bridge, where it meets Princes Street in the New Town, on the west side is the Balmoral Hotel, originally built as the North British Hotel, the North British Railway's hotel serving Waverley Station, which lies below. On the east side is Waverley Gate, originally the Edinburgh General Post Office, now serving as office space.

The old North Bridge, with Calton Hill in the background, in 1829

The first stone of the original bridge was laid on 21 October 1763 by the Lord Provost, George Drummond, a driving force behind the modernisation of Edinburgh. In that year, the North Loch, which separates the New from the Old Town, was drained, and the mud removed. But, though the erection of the bridge was resolved upon at that time, the contract for building the bridge was not signed till the 21 August 1765. The parties to this contract were the town-council of Edinburgh, and William Mylne, architect, brother to Robert Mylne. The sum agreed for was £10,140; the work was to be completed before Martinmas (11 November) 1769, and Mylne was to guarantee the works for a period of ten years.[7]

A difficulty, however, occurred in the course of the work, which had neither been foreseen nor provided against. As the north side of the hill on which the old part of the city stands is extremely steep, it had been found convenient, in early times, to throw the earth dug from the foundations of houses down this declivity, towards the North Loch. As a result the whole mass, to a considerable depth, consisted entirely of loose earth. Mylne underestimated the depth of foundations required. This, together with other design faults, led to a collapse of part of the structure on 3 August 1769, killing five people. Rebuilding work cost another £18,000 and the bridge reopened in 1772.[7]

The North Bridge consisted of three central arches, two side arches, with several smaller concealed ones at each end, of the following dimensions: width of the three central arches, 72 feet (22 m) each; breadth or thickness of the piers, 13.5 feet (4.1 m); width of the small arches, 20 feet (6.1 m) each. The total length of the piers and arches was 310 feet (94 m); and the whole length of the bridge, from the High Street to Princes Street was 1,125 feet (343 m). The height of the central arches, from the top of the parapet to the base, was 68 feet (21 m); the breadth of the bridge within the wall over the arches was 40 feet (12 m); and the breadth at each end 50 feet (15 m). Towards the northern extremity, however, the bridge was widened(?) by the erection of a range of buildings on the site of a lane called St Ann Street.[7]

This first North Bridge was demolished in 1896 to make way for its successor.