For You, For Me Tour

For You, For Me Tour

The For You, For Me Tour (also known as Kylie American Tour: A Retrospective and North American Tour 2009, advertised as KylieUSA2009)[1][2] was the ninth concert tour by Australian singer Kylie Minogue.[3] This is Minogue's first concert tour in North America. The concert has received very favorable reviews from music critics. Despite previous criticism of touring this territory by Minogue and her management, the tour grossed over three million dollars.

In 2002, there was speculation Minogue would bring her KylieFever2002 to the U.S. and Canada, after the success of Fever and its singles in those territories. It was originally believed Minogue did not want to scale down the show for smaller venues but later revealed she was swayed by her management to not perform in the U.S. and Canada. However, Minogue did tour the U.S. with Jingle Ball, an annual concert festival produced on by KIIS-FM, visiting Anaheim, Houston, Miami, Philadelphia and New York City.[4][5]

The tour was officially announced via Billboard on May 6, 2009. Minogue stated, "I’ve wanted to tour in America and Canada for years now and know that fans have been waiting a long time for this. I’m thrilled that the opportunity has finally arrived."[6] Bill Silva (CEO of Bill Silva Presents) stated, "Kylie has such a successful career outside of North America that it has taken quite a while to find a window in her schedule for the U.S. and Canada. Her amazing fans in North America will be well rewarded for their patience when they experience her show and its entire spectacle."[7] Minogue promoted the tour on the fourth hour of the Today Show in New York stating that she's always wanted to tour the US, but it was a constant battle with her manager. During an interview with BlackBook Magazine Minogue spoke about her fanbase in North America: "The fans in America aren’t great in number, but they’re great in spirit. And they’ve been so patient. I think I really shocked them when I said I was touring, because they’ve become accepting of the fact that it was never going to happen. But I meant it, all the years I spent saying I would love to tour the States" and what they should expect from the tour: "I decided not to go somewhere I’ve never been before, direction-wise, because American audiences haven’t seen my live shows for the most part. So we decided—and I guess it works well in these financial times—to bring with us a “best of” my different tours". Jean-Paul Gaultier created some of the outfits for the show.[8]

Minogue later commented on the tour, stating, "It was a micro-tour, but I’ve got to tell you it was so rewarding [...] It was a mission from the heart… It was like… setting my wallet on fire because basically it just made no financial sense to do it, but I just reached a point where I thought, ‘That’s it! I just wanna!’ I got a lot of reward from it. Right back to the heart, so it was amazing."[9] 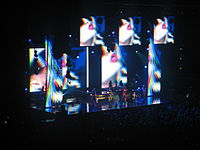 Minogue performs "In My Arms" at the Air Canada Centre, Toronto.

For the most part, the tour received rave reviews. After being "stunned by the glitz and glamour of Kylie’s tour and the power it had to pull in celebs when she performed at the Palms", Vegas promoters even offered Minogue a complete residence for a show in the city.[21]

In December 2009, Billboard magazine announced Minogue would release a live recording of her performance at the Hammerstein Ballroom. It contains all songs performed with the exception of "Better Than Today", recorded for Minogue's next studio album. The album was released in digital format, only available to online digital media stores, on December 14, 2009.[29]

Footage from the tour is included on the Special Edition DVD of Kylie Minogue's album, Aphrodite. It features the "White Diamond Theme", "White Diamond", "Confide in Me", and "I Believe in You".

On May 3rd, 2011, to celebrate the arrival of the "Aphrodite Live" leg of Kylie's Aphrodite World Tour to the United States, a digital EP was released. Besides including three songs performed by Kylie at the BBC's Live Lounge, it also featured two songs live from her 2009 concert at the Hammerstein Ballroom: "Confide in Me" and "Better Than Today", the latter being the only song not included in the "Kylie: Live in New York" album.