The North–South Expressway (NSE) (Malay: Lebuhraya Utara-Selatan) ((simplified Chinese: 南北高速公路)) is the longest expressway in Malaysia with the total length of 966 km (600 mi) running from Bukit Kayu Hitam in Kedah near the Malaysian-Thai border (connects with Phetkasem Road (Route 4) in Thailand) to Johor Bahru at the southern portion of Peninsular Malaysia and to Singapore. The expressway links many major cities and towns in western Peninsular Malaysia, acting as the 'backbone' of the west coast of the peninsula. It is also known as PLUS Expressway, named after the highway's concessionaire, Projek Lebuhraya Utara Selatan Berhad (North South Expressway Project; abbreviated as PLUS).

This expressway passes through 7 states on the peninsula: Johor, Malacca, Negeri Sembilan, Selangor, Perak, Penang and Kedah. It provides a faster alternative to the old Federal Route

It is divided into a few main routes;

, opened in 1997, is a highway built to bypass Kuala Lumpur. It starts from the Shah Alam interchange on the NKVE

, past Subang Jaya, Putrajaya and Kuala Lumpur International Airport, and ends at the Nilai Utara interchange on the

is the Second Link Expressway (Linkedua), which is connected to Malaysia-Singapore Second Link, starting at Senai Airport and ends in Tanjung Kupang before crossing. PLUS also obtained the Seremban-Port Dickson Highway,

, which starts at Mambau in Seremban with an interchange at Lukut and ending near the town centre in Port Dickson and Butterworth–Kulim Expressway,

which starts from Butterworth, Penang to Kulim in Kedah.

end in Kuala Lumpur. The

Kuala Lumpur-Seremban Expressway with interchanges to the Federal Highway Route

and heads towards the city centre.

The pioneer route for

North–South Expressway Northern Route was the Bukit Kayu Hitam – Jitra section (both in Kedah), which was initially a part of the Federal Route

The pioneer route for

North–South Expressway Southern Route was Kuala Lumpur-Seremban Expressway, opened on 16 June 1982. However, the section from Razak Mansion to Sungai Besi toll plaza was not acquired by PLUS Expressway Berhad but rather by MetaCorp – as a result, the section was not included in the southern route.

Plans to upgrade the stretches from Slim River to Tanjung Malim, Tanjung Malim to Rawang (Northern route), Seremban to Senawang, and Senawang to Ayer Keroh (Southern route) was approved by the government for better traffic flow. It was completed in 2007.

The Jelapang and Ipoh South toll plazas were demolished in 2009 to make a non-stop route across Ipoh. This is achieved through the construction of two local-express lanes for each side, which are only accessible via edit] Fourth Lane additions

On July 2010, the operator PLUS Expressways Berhad announced that the government has awarded contracts to build a fourth lane on certain stretches of the highway, namely from Shah Alam to Jalan Duta, from Shah Alam to Rawang and from Nilai (North) to Seremban. It is unknown when the construction is expected to begin.

Generally the expressway consists of 4 lanes, 2 for each direction. There are some exceptions to this; the following are stretches with 6 lanes (3 each way):

North–South Expressway is designed as a high-speed long distance expressway therefore the default speed limit on the expressway is 110 km/h (68 mph), but there are some exceptions in some places for several reasons, including:- 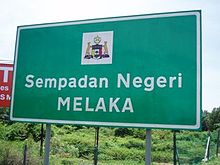 The Malacca state border sign along the North South Expressway.

Most heavy vehicles are only allowed to travel 80–90 km/h by law. Considering that two lanes are inadequate for smooth traffic flow, the expressway is being widened as a result of the increasing number of fatal accidents along this highway. 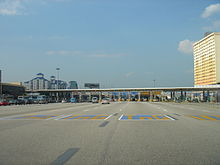 Toll booths at Sungai Besi Toll Plaza, leading to Kuala Lumpur. Almost all of the south section of the expressway is covered by the closed system. 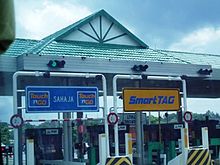 The North–South Expressway is a toll expressway with two toll systems:-

Effective 1 January 2009, Class 1 highway users traveling on the expressway (NSE) and North–South Expressway Central Link (ELITE) between 12:00 midnight and 7:00 am will be able to enjoy 10 percent toll discount. This is part of the PLUS’ initiatives to offer added value to its customers on both highways.

There are three toll incentive packages of the PLUS Travel Incentive Program which will be enjoyed by the customers on the PLUS and ELITE highways which are:-

Toll rate classes for every PLUS Expressways Networks 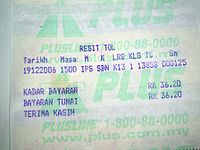 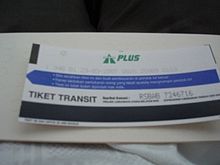 Facilities along the expressway 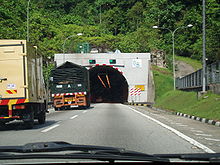