Suxamethonium chloride (INN), also known as suxamethonium or succinylcholine, is a paralytic drug used to induce muscle relaxation and short term paralysis, usually to facilitate tracheal intubation. Suxamethonium is sold under the trade names Anectine, Quelicin and Scoline. It is used as a paralytic agent for euthanasia/immobilization of horses. It is commonly known as "succs" in hospital (emergency department) settings. 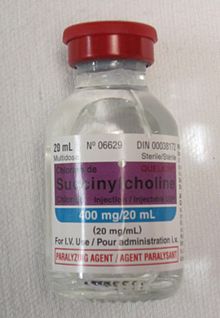 A vial of suxamethonium chloride

Its medical uses are limited to short-term muscle relaxation in anesthesia and intensive care, usually for facilitation of endotracheal intubation. Despite its adverse effects, including life threatening malignant hyperthermia, hyperkalaemia and anaphylaxis, it is perennially popular in emergency medicine because it arguably has the fastest onset and shortest duration of action of all muscle relaxants. The former is a major point of consideration in the context of trauma care, where endotracheal intubation may need to be completed very quickly. The latter means that, should attempts at endotracheal intubation fail and the patient cannot be ventilated, there is a prospect for neuromuscular recovery and the onset of spontaneous breathing before hypoxaemia occurs.

Suxamethonium is also commonly used as the sole muscle relaxant during electroconvulsive therapy, favoured for its short duration of action.

Suxamethonium does not produce unconsciousness or anesthesia, and its effects may cause considerable psychological distress while simultaneously making it impossible for a patient to communicate. For these reasons, administration of the drug to a conscious patient is contraindicated, except in necessary emergency situations.

In Tamil Nadu anaesthetists ask patients for their caste because many members of the Arya Vaisya Chettiyar clan, are fatally allergic to Suxamethonium.[2]

Severe hyperkalemia will cause changes in cardiac electrophysiology, which, if severe, can result in asystole.

This side effect can result from succinylcholine administration in which a drastic and uncontrolled increase in skeletal muscleoxidative metabolism. This overwhelms the body's capacity to supply oxygen, remove carbon dioxide, and regulate body temperature, eventually leading to circulatory collapse and death if not treated quickly.

Susceptibility to MH is often inherited as an autosomal dominant disorder, for which there are at least 6 genetic loci of interest,[1] most prominently the ryanodine receptor gene (RYR1). MH susceptibility is phenotypically and genetically related to central core disease (CCD), an autosomal dominant disorder characterized both by MH symptoms and myopathy. MH is usually unmasked by anesthesia, or when a family member develops the symptoms. There is no simple, straightforward test to diagnose the condition. When MH develops during a procedure, treatment with dantrolene sodium is usually initiated; dantrolene and the avoidance of succinylcholine administration in susceptible people have markedly reduced the mortality from this condition.

This drug has occasionally been used as a paralyzing agent for executions by lethal injection, although pancuronium bromide is the preferred agent today because of its longer duration of effect and its absence of fasciculations as a side effect. It has also been used for murder by Dr. Carl Coppolino.[3] Suxamethonium was the drug used to murder Nevada State Controller Kathy Augustine,[4] and was used by surgical technician Kim Hricko in the 1998 murder of her husband Steve.[5] According to Dubai authorities, Mahmoud al-Mabhouh was injected with succinylcholine by his attackers before being suffocated.[6]

Suxamethonium is an odourless, white crystalline substance. Aqueous solutions have a pH of about 4. The dihydrate melts at 160 °C, while the anhydrous melts at 190 °C. It is highly soluble in water (1 gram in about 1 mL), soluble in alcohol (1 gram in about 350 mL), slightly soluble in chloroform, and practically insoluble in ether. Suxamethonium is a hygroscopic compound.[7] The compound consists of two acetylcholine molecules that are linked by their acetyl groups.

It has been in use since the pharmacological properties of succinylcholine were discovered around 1950 by K.H. Ginzel, H Klupp, and Gerhard Werner in Vienna, Austria.

There are two phases to the blocking effect of suxamethonium; Phase 1 block is the principal paralytic effect.

Binding of suxamethonium to the nicotinic acetylcholine receptor results in opening of the receptor's monovalent cation channel; a disorganized depolarization of the motor end plate occurs and calcium is released from the sarcoplasmic reticulum.

In normal skeletal muscle, following depolarization, acetylcholine dissociates from the receptor and is rapidly hydrolyzed by acetylcholinesterase and the muscle cell is ready for the next signal.

Suxamethonium has a longer duration of effect than acetylcholine and is not hydrolyzed by acetylcholinesterase. By maintaining the membrane potential above threshold, it does not allow the muscle cell to repolarize. When acetylcholine binds to an already depolarized receptor it cannot cause further depolarization.

Calcium is removed from the muscle cell cytoplasm independent of repolarization (depolarization signaling and muscle contraction are independent processes). As the calcium is taken up by the sarcoplasmic reticulum, the muscle relaxes. This explains muscle flaccidity rather than tetany following fasciculation.

This phase isn't something abnormal and is a part of its mechanism of action. When the blood concentration of suxamethonium reaches therapeutic window, this phase starts and the muscle paralysis (Over-contractions= Loss of ATP resources => Paralysis).