The Nordmann's Greenshank or Spotted Greenshank Tringa guttifer is a wader in the large family Scolopacidae, the typical waders. 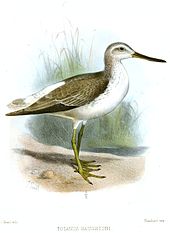 The Nordmann's Greenshank breeds in eastern Russia along the south-western and northern coasts of the Sea of Okhotsk and on Sakhalin Island. Its non-breeding range is not fully understood, but significant numbers have been recorded in South Korea, mainland China, Hong Kong (China), and Taiwan (China) on passage, and in Bangladesh, Thailand, Cambodia, Vietnam and Peninsular Malaysia in winter. It has also been recorded on passage or in winter in Japan, North Korea, India, Sri Lanka, Myanmar (which may prove to be an important part of its wintering range), Singapore, the Philippines and Indonesia. There are unconfirmed records from Nepal and Guam (to US). It probably has a population of 500-1,000 individuals.

It is fairly aberrant and was formerly placed in the monotypic genus Pseudototanus. It is an endangered species, and was not available for molecular analyses in Pereira & Baker's study (2005) of the genus Tringa. It appears closest overall to the semipalmata-flavipes and the stagnatilis-totanus-glareola groups, though it also has some similarities to the Greater Yellowlegs and Common Greenshank.