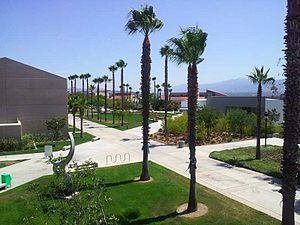 Preparation for the establishment of Norco College began in the 1980s,[2] when the Riverside Community College District paid the U.S. government one dollar to acquire a 141-acre (57 ha) parcel of land.[3] (The college is on land once associated with The Hotel Norconian, a luxury resort that was acquired by the United States Navy in December, 1941; it was converted into a military hospital during World War II.[4] Today the original hotel property is listed on the National Register of Historic Places[5] and is currently home to the U.S. Navy’s Naval Surface Warfare Center, Corona Division.[6])

RCCD opened the Norco Campus in April 1991, with an intent to meet the needs of students in the rapidly-growing cities of Corona and Norco. The campus enrolled 3,088 students in its first semester—an opening scheduled to coincide with the 75th anniversary of the parent Riverside institution.[7]

The Norco Campus experienced rapid growth in enrollment. By fall 1994, student headcount was 3,782; by fall 2000, it was 6,681. By 2003, the Board of Trustees of Riverside Community College District had begun to implement changes that would enable the Norco campus to achieve full college accreditation.[8] Enrollment in fall 2008 exceeded 10,000 students.[9]

The mascot of Norco College is the Mustang,[13] an icon which refelcts the equestrian character of the local community.[14] Self-identified as "Horsetown USA," the City of Norco has few sidewalks but over 90 miles of equestrian trails[15] and a volunteer Mounted Posse.[16]

According to the Institutional Research Office of the Riverside Community College District, in the 2009-2010 academic year a total of 10,951 students were enrolled at Norco College.[17]

Student headcount by gender determined that 57% were female, and 42% were male (1% nonrespondent).[18]

Career & Technical Education (CTE) at Norco College offers Certificate Programs and Associate of Science Degrees with an occupational emphasis. These programs offer the education and training necessary to lead individuals directly to employment, update the knowledge and skills of current workers, and/or lead to further academic growth at 4-year universities.

The CTE programs at Norco College strive to keep current with labor market and industry trends. By bringing together local employers, faculty, staff and students our curriculum is ever changing to meet the demands of an increasingly competitive job market.

CTE Programs (current or in development)

In March 2004, voters in the Riverside Community College District approved a $350 million bond measure to support the acquisition and modernization of classroom buildings and other facilities on RCCD sites.[21]

A portion of the RCCD Measure C funds were allocated to Norco College, and to date have funded the installation of an artificial turf soccer field and the construction of two new buildings:[22]

In October 2009, Norco College received a $2.8 million five-year grant to enable creation of a Game Art program with tracks for Game Design, Game Programming, and Game Audio.[27] A second component of the grant is the integration of games, simulations, and electronic portfolios into other transfer and career tech programs to increase student success and retention.[28]