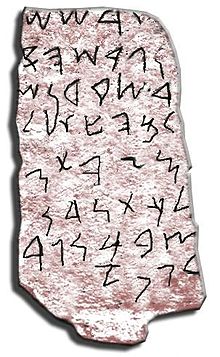 The Nora Stone or Nora Inscription is an ancient inscription found at Nora on the south coast of Sardinia in 1773. Though its precise finding place has been forgotten, it has been dated by palaeographic methods to the late 9th century to early 8th century BCE[1] and is still considered the oldest Phoenician inscription yet found in Sardinia. It is conserved at the Museo Archeologico Nazionale, Cagliari.

A possible reference to Pygmalion of Tyre is inferred by an interpretation of the fragmentary inscription, made by Frank Moore Cross as follows:[2]

In this rendering, Cross has restored the missing top of the tablet (estimated at two lines) based on the content of the rest of the inscription, as referring to a battle that has been fought and won. Alteratively, "the text honours a god, most probably in thanks for the traveller's safe arrival after a storm", observes Robin Lane Fox.[3]

According to Cross the stone has been erected by a general, Milkaton, son of Shubna, victor against the Sardinians at the site of TRSS, surely Tarshish. Cross conjectures that Tarshish here "is most easily understood as the name of a refinery town in Sardinia, presumably Nora or an ancient site nearby."[4] He presents evidence that the name PMY ("Pummay") in the last line is a shortened form (hypocoristicon) of the name of Shubna's king, containing only the divine name, a method of shortening “not rare in Phoenician and related Canaanite dialects.”[5]. Since there was only one king of Tyre with this hypocoristicon in the 9th century BC, Cross restores the name to pmy(y)tn or p‘mytn, which is rendered in the Greek tradition as Pygmalion.

Cross's interpretation of the Nora Stone provides additional evidence that in the late 9th century BCE, Tyre was involved in colonizing the western Mediterranean, lending credence to the establishment of a colony in Carthage in that time frame. Pygmalion, the Greek version of the Phoenician royal name Pumayyaton, also figures in the founding legend of Paphos in Cyprus, and Robin Lane Fox more cautiously finds a Cypriote association possible: "The traveller even may have had links with Cyprus, suggesting the Cypriote contacts had guided Phoenicians to this island."[6]