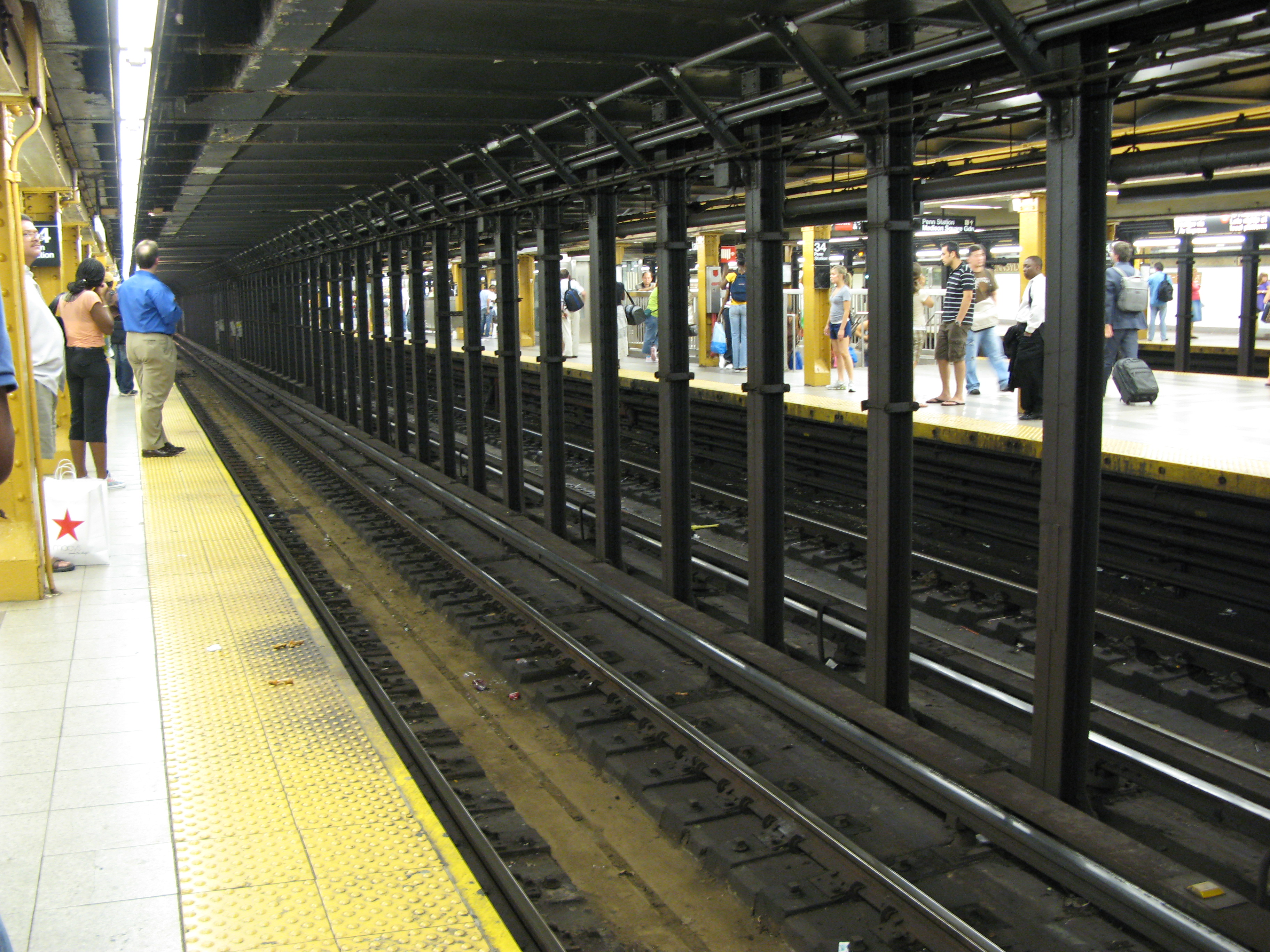 34th Street&ndash;Penn Station is a station on the of the . Located at the intersection of 34th Street and Seventh Avenue, it is served by the NYCS|1 and NYCS|2 trains at all times, and the NYCS|3 train at all times except late nights. Connections are available to the LIRR, NJ Transit, and in Pennsylvania Station and to PATH at 33rd Street and Sixth Avenue.

34th Street-Penn Station on the IRT Broadway-Seventh Avenue Line was opened on as part of an extension of the , the dominant subway in at the time, from Times Squre-42nd Street to South Ferry.

Like 34th Street–Penn Station on the and Atlantic Avenue on the , this station has side platforms for local service and an island platform for express service. This is due to the expected increase in ridership and to encourage riders to switch at the next stop northbound, Times Square-42nd Street, as it is set up in the usual island platform manner for cross-platform interchanges.

There is no free transfer between this station and 34th Street–Penn Station (NYCS Eighth south) on the Eighth Avenue Line, despite the fact that both connect to Penn Station. The nearest transfer location is at Times Square-42nd Street with a free transfer to 42nd Street-Port Authority Bus Terminal.

34th Street-Penn Station spans three streets: 32nd, 33rd, and 34th Streets. For each of these streets there is a set of entrances and exits. For the purposes of this article, entrance and exit are interchangeable except when explicitly mentioned.

*34th Street exits access icon|10px: There are four entrances directly from the intersection of 34th Street and 7th Avenue. On the local platforms the turnstiles for these exits are at platform level; passengers wishing to use the express platforms must use a passeageway beneath the platforms and tracks. These entrances utilise the northern portions of the platforms. There is also a supplementary and handicapped-accessible entrance to the Penn Station complex in general from 34th Street.
*33rd Street exits: There are three direct entrances from the street at 33rd Street and 7th Avenue. As a replacement for the southwestern corner's lack of an entrance, there is an underground entrance directly connecting the station with the Long Island Rail Road concourse in the Penn Station complex. The turnstiles for this entrance are located below the track level and utilise the central portions of the platforms. There are no turnstiles at platform level for these exits.
*32nd Street exits:The main entrance to the Penn Station complex is located on the western end of 32nd Street. From there, passengers must go through the New Jersey Transit and Long Island Rail Road concourses and use the main entrance to the station at the end of the latter's concourse. There is also a smaller exit from the station and the southern ends of the platforms that connects with the end of the New Jersey Transit concourse where it meets the Long Island Rail Road underneath the main corridor in the station that connects New Jersey Transit and Amtrak. There is also an entrance on the north side of 32nd Street between 7th and 6th Avenues.