The Nonius, or Nóniusz, is a horse breed named after its Anglo-Norman foundation sire. The breed was developed at the Imperial Stud at Mezőhegyes, Hungary by careful linebreeding. Originally bred to serve as a light draft and utility horse for Hungary's military, the breed became a useful agricultural horse during the 20th century. Today the breed is bred by preservationists and is used in agriculture, leisure riding, and competitive driving sports. The largest numbers of Nonius horses are still found at Mezőhegyes, with representatives in other eastern European nations as well.

Horse-breeding has been an important facet of Hungarian culture since its settlement, due largely to its geographic location and open plains. The Ottoman Conquest, beginning in 1526, saw an influx of eastern, desert-type horses traditionally described as "oriental." These Arabian and Turkish horses were elegant and reactive, and left their mark on the stock of Hungarian horses.[1] Even after the Ottoman occupation of Hungary ended in 1699, the attachment between Hungary and the Arabian horse remained. During the 18th century, the Hungarian court and aristocracy began to follow the tastes of their western neighbors for Iberian types. The Spanish and Neapolitan imports of the time sparked the creation of the Lipizzaner and Kladruber. These Austrian breeds are known for the features of their Spanish-Neapolitan ancestors: thick, high-set neck, elegant but heavy head, short back and agility.[1] Demand for suitable mounts for the courtiers and aristocrats outstripped the production by private breeders, and so during his reign Joseph II instructed the building of a number of state Stud farms.[1]

The State Stud of the Hungarian Royal and Imperial Court, Mezohegyes, was founded in 1784 to help meet the demand for horses.[2] At the time, Hungary was home to 1.5 million horses, with the Hungarian cavalry requiring between 10,000 and 15,000 new mounts per year.[1] Different horses fulfilled different roles: courtiers and aristocrats wanted agile, responsive, impressive riding horses for their military endeavors, resilient mounts for hunting on horseback, in addition to elegant carriage horses.[1] Fulfilling these demands led Mezohegyes to develop several different breeds and strains: the Arab-influenced Gidrán, half-bred Furioso-North Star, and the heavier Nonius.[2]

The Nonius breed owes its name to its foundation sire, though since his male descendants share his name, he is called "Nonius Senior." Nonius was born in 1810 in Calvados, Normandy.[1][3] His sire was the Thoroughbred Orion, and his dam was a Norman mare; all told Nonius was 3/8 Thoroughbred, an Anglo-Norman horse.[1] He was captured from the French Stud at Rosiers aux Salines during the Napoleonic Wars and brought to Mezohegyes in 1816.[3]

Even as a foal he was considered ugly.[1] At maturity, the light bay stallion stood about 16.3 hands high. Whether he possessed all of the conformational traits attributed to him - a list that includes most major failings[3] - is hard to know. The qualities of his descendants suggest that he had, at the very least, a very plain head. "Without special beauty in [his] looks,"[4] Nonius at first did not serve many mares at Mezohegyes. It was not until his offspring began to show that they were not so unfortunate as their sire, and additionally possessed uncommon endurance and power that his popularity began to rise.[3] Going forward, his mates at Mezohegyes were the fashionable daughters of Spanish-Neapolitan stallions, descended from the Arabian-impressed Hungarian stock.[3][4]

The Prince of Lobkowitz, who in 1854 became the head of Mezohegyes, stressed the importance of fixing the type - that is, making the characteristics of a breed of animal genetically homogenous - of the horses.[1] This goal was achieved by linebreeding, though the one season that Nonius Senior served his own daughters was notably unsuccessful: of the 33 foals, 11 died while only 2 were broodmare-quality and 1 was stallion-quality.[1] However with more experimentation, the Nonius breed emerged as a uniformly heavy but elegant military driving and carting horse. In 1865, Arabian and Thoroughbred stallions were introduced for Nonius Senior's female descendants in the hopes of correcting a lack of balance and elegance among the Nonius horses.[1][3] Fifteen of Nonius's sons stood stud, and 122 were broodmares.[3] 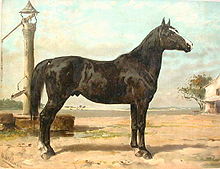 1898 lithograph of a Nonius horse

The roles and popularity of the Nonius breed were affected by periods of social and political upheaval. In 1900 the utilitarian quality and modest appearance of the Nonius horses won the breed the title of "Ideal Horse" at the Paris Exposition Universelle. The military technological advances of World War II displaced the Nonius horses, which were then directed towards agriculture instead.[4] The damage that the property, supplies, and livestock of Mezohegyes suffered during the Second World War were steadily rebuilt up through the 1960s.[5] Communist Hungary was not supportive of horseback riding, and in the years between 1947 and 1961, more Hungarian horses were lost to the abbatoir than were casualties of the war.[1] Attempts to produce sport-oriented horses from Nonius stock were largely unsuccessful, though during the 1970s combined driving emerged as a popular horse-sport at which the Nonius could excel.[4] In 1989 the Nonius Horse Breeders National Association was formed to protect the purebred Nonius horse.[3] Today estimates put the population of Nonius horses at about 450 mares and 80 stallions.[4] The largest population is found at Mezohegyes, with other herds in Romania, Bulgaria, and Vojvodina (Serbian province).[3][4]

Close linebreeding during the breed's establishment and continued use of a closed studbook have contributed to a recognizable and reliably-transmitted type in the Nonius. The vast majority are black, or dark bay or brown, either unmarked or modestly marked with white.[3] Bay individuals are more common among the Nonius horses from Hortobágy.[4] The breed is also known for the heavy but proportional head with a convex profile called either a ram's head or Roman nose.[3][4] The breed exhibits traits common to heavy-boned driving and light draft horses: powerful and arched high-set neck, broad and muscular back, open but powerful loin, deep and sloping hindquarters. The chest is broad rather than deep, and is usually more shallow than the hindquarters. The hooves and joints are large and the legs are dry.[4] Nonius horses stand between 15.1 hands high (155 cm) and 16.1 hands high (165 cm). One of the heaviest warmblood driving horses, the ideal Nonius has a girth of 70-83 inches (180–210 cm) and a cannon circumference of 8-9 inches (22–24 cm).[3][4] Nonius horses are also known for a kind, even temperament and great willingness and capacity for work both in harness and under saddle.[3] In addition they are usually easy keepers with high endurance.[6] They are used today in agricultural work, light draft and the sport of combined driving. The popularity of driving sport in Hungary rose sharply during the 1970s and 1980s.[1] The Combined Driving World Championships are held every 2 years, and the most competitive event features teams of four horses. Of the 6 champions named between 1974 and 1984, all but one were Hungarian.[7] The Nonius is slower and less suitable for other riding sports like dressage and show jumping than lighter horses.[7]