Spinal decompression is a term that describes the relief of pressure on one or many pinched nerves (neural impingement) of the spinal column.[1]

Spinal decompression can be achieved both surgically and non-surgically and is used to treat conditions that result in chronic back pain such as disc bulge, disc herniation, sciatica, spinal stenosis, and isthmic and degenerative spondylolisthesis.

Microdiscectomy is a minimally invasive surgical procedure in which a portion of a herniated nucleus pulpolsus is removed by way of a surgical instrument or laser while using an operating microscope or loupe for magnification.[2]

Laminectomy is an invasive surgical procedure in which a small portion of the arch of the vertebrae (bone) is removed from the spine to alleviate the pressure on the pinched nerve. This is an elective procedure for those that have not found relief of their back pain through more conservative treatment options.[3] 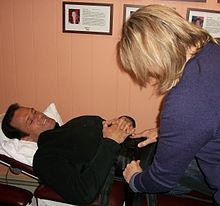 In nonsurgical spinal decompression, a patient is strapped securely to a table. 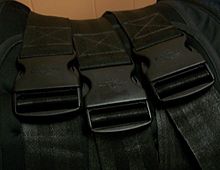 Non-surgical spinal decompression is achieved through the use of a mechanical traction device applied through an on-board computer that controls the force and angle of disc distraction, which reduces the body’s natural propensity to resist external force and/or generate muscle spasm. This enhanced control allows non-surgical spinal decompression tables to apply a traction force to the discs of the spinal column reducing intradiscal pressure, unlike previous non-computer controlled traction tables.

Inversion therapy, which involves hanging upside down, is a form of mechanical traction used for spinal decompression.[4]

The practice is promoted as safe and effective without the normal risks associated with invasive procedures such as injections, anesthesia or surgery. Spinal decompression works through a series of 15 one minute alternating decompression (using a logarithmic decompression curve) and relaxation cycles with a total treatment time of 30 minutes. During the decompression [5] phase the pressure in the disc is reduced and a vacuum type of effect is produced on the nucleus pulposis. At the same time nutrition is diffused into the disc allowing the annulus fibrosis to heal. Very rarely is the nerve root compressed from the herniated disc and usually the back and leg pain associated with these conditions is a result of irritation to the nerve root sleeve by the inflammatory chemicals that are released as a result of inflammation in the disc.[6]

The theory behind non-surgical spinal decompression is that significant distractive forces, when applied to the lumbar spine in variable directions, can create a negative pressure in the center of the intervertebral disc, thereby creating a suctioning effect or vacuum phenomenon in order to retract or reduce the size of the herniated or bulging disc's gelatinous internal nucleus pulposus, thus diminishing or eliminating nerve compression, while at the same time creating an osmotic gradient which helps bring nutrients and water into the disc. Since intervertebral discs have poor circulation, they depend upon receiving their nutrition through diffusion across the end plates of the vertebrae above and below.

The appeal of non-surgical spinal decompression is that it is a non-invasive, non-surgical, drug-free alternative treatment for low back pain, sciatica, disc degeneration, disc bulges, disc herniations, and facet syndrome. There is copious anecdotal evidence of its effectiveness and more case studies are being published demonstrating very positive results in patients who have tried other conservative treatments that have failed.

Non-surgical spinal decompression was originally developed and pioneered by Dr. Allan Dyer, PhD, MD in 1985 and the first non-surgical spinal decompression table, the Vax-D was introduced by him in 1991.[8] This original device was controlled by a pneumatic system and gradually applied and released, with the traction force being applied to reduce muscle guarding and spasm. In 2004, Vax-D Medical Technologies introduced an enhanced version of this table called the G2 that replaced the pneumatic technology with more precise electrically driven components and also added an enhanced on board computer control system that instituted a logarithmic curve.[9]

Many other doctors, scientists, and corporations have developed other non-surgical spinal decompression tables, each with features believed to mimic or enhance the effectiveness of the original concept. Intervertebral differential dynamics (IDD) therapy[10] is a similar technique.

In a small randomized study of 44 subjects, in which one author disclosed a proprietary interest in Vax-D, it was shown to have a clinical success rate of 68.4%.[11]

A 2004 report by the State of Washington Department of Labor and Industries concluded "Published literature has not substantially shown whether powered traction devices are more effective than other forms of traction, other conservative treatments, or surgery."[12] A 2005 review of VAX-D (including the Sherry study above) by the Workers' Compensation Board of British Columbia concluded "To date there is no evidence that the VAX-D system is effective in treating chronic LBP associated with herniated disc, degenerative disc, posterior facet syndrome, sciatica or radiculopathy."[13]

A 2006 systematic review of studies of spinal decompression using motorized traction devices conducted between 1975 and October 2005 (including the two mentioned above) concluded that "...the efficacy of spinal decompression achieved with motorized traction for chronic discogenic low back pain [remained] unproved", and called for "Scientifically more rigorous studies with better randomization, control groups, and standardized outcome measures … to overcome the limitations of past studies."[14] A technology assessment conducted in 2007 by the Agency for Healthcare Research and Quality (for which the two studies cited above were included for analysis) said "Currently available evidence is too limited in quality and quantity to allow for the formulation of evidence-based conclusions regarding the efficacy of decompression therapy as a therapy for chronic back pain when compared with other non-surgical treatment options."[15]

A 2007 critique of research studies, including the two cited above, said:

There is very limited evidence in the scientific literature to support the effectiveness of non-surgical spinal decompression therapy. This intervention has never been compared to exercise, spinal manipulation, standard medical care or other less expensive conservative treatment options which have an ample body of research demonstrating efficacy. Considering the cost-benefit relationship, many better researched and less expensive treatment options are available to the clinician.[16]