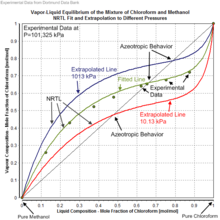 The non-random two-liquid model[1] (short NRTL equation) is an activity coefficient model that correlates the activity coefficients γi of a compound i with its mole fractions xi in the liquid phase concerned. It is frequently applied in the field of chemical engineering to calculate phase equilibria. The concept of NRTL is based on the hypothesis of Wilson that the local concentration around a molecule is different from the bulk concentration. This difference is due to a difference between the interaction energy of the central molecule with the molecules of its own kind Uii and that with the molecules of the other kind Uij. The energy difference also introduces a non-randomness at the local molecular level. The NRTL model belongs to the so-called local-composition models. Other models of this type are the Wilson model, the UNIQUAC model, and the group contribution model UNIFAC. These local-composition models are not thermodynamically consistent due to the assumption that the local composition around molecule i is independent of the local composition around molecule j. This assumption is not true, as was shown by Flemmer in 1976.[2]

Equations for a binary mixture

For a binary mixture the following equations[3] are used:

In here τ12 and τ21 are the dimensionless interaction parameters, which are related to the interaction energy parameters Δg12 and Δg21 by:

Here R is the gas constant and T the absolute temperature, and Uij is the energy between molecular surface i and j. Uii is the energy of evaporation. Here Uij has to be equal to Uji, but Δgij is not necessary equal to Δgji.

The parameters α12 and α21 are the so-called non-randomness parameter, for which usually α12 is set equal to α21. For a liquid, in which the local distribution is random around the center molecule, the parameter α12 = 0. In that case the equations reduce to the one-parameter Margules activity model:

In practice, α12 is set to 0.2, 0.3 or 0.48. The latter value is frequently used for aqueous systems. The high value reflects the ordered structure caused by hydrogen bonds. However in the description of liquid-liquid equilibria the non-randomness parameter is set to 0.2 to avoid wrong liquid-liquid description. In some cases a better phase equilibria description is obtained by setting α12 = − 1[4]. However this mathematical solution is impossible from a physical point of view, since no system can be more random than random (α12 =0). In general NRTL offers more flexibility in the description of phase equilibria than other activity models due to the extra non-randomness parameters. However in practice this flexibility is reduced in order to avoid wrong equilibrium description outside the range of regressed data.

The expressions show that at α12 = 0 the limiting activity coefficients are equal. This situation that occurs for molecules of equal size, but of different polarities.
It also shows, since three parameters are available, that multiple sets of solutions are possible.

The general equation for ln(γi) for species i in a mixture of n components is[5]:

There are several different equations forms for αij and τij, the most general of which are shown above.

To describe phase equilibria over a large temperature regime, i.e. larger than 50 K, the interaction parameter has to be made temperature dependent. Two formats are frequently used. The extended Antoine equation format:

Here the logarithmic term is mainly used in the description of liquid-liquid equilibria (miscibility gap).

The other format is a third-order polynomial format:

The NRTL parameters are fitted to activity coefficients that have been derived from experimentally determined phase equilibrium data (vapor–liquid, liquid–liquid, solid–liquid) as well as from heats of mixing. The source of the experimental data are often factual data banks like the Dortmund Data Bank. Other options are direct experimental work and predicted activity coefficients with UNIFAC and similar models. Noteworthy is that for the same liquid mixture several NRTL parameter sets might exist. The NRTL parameter set to use depends on the kind of phase equilibrium (i.e. solid–liquid, liquid–liquid, vapor–liquid). In the case of the description of a vapor–liquid equilibria it is necessary to know which saturated vapor pressure of the pure components was used and whether the gas phase was treated as an ideal or a real gas. Accurate saturated vapor pressure values are important in the determination or the description of an azeotrope. The gas fugacity coefficients are mostly set to unity (ideal gas assumption), but for vapor-liquid equilibria at high pressures (i.e. > 10 bar) an equation of state is needed to calculate the gas fugacity coefficient for a real gas description.