The most widespread standard for configuring multiple hard drives is RAID (Redundant Array of Independent Disks), which comes in a number of standard configurations and non-standard configurations. Non-RAID drive architectures also exist, and are often referred to, similarly to RAID, by standard acronyms, several tongue-in-cheek.

JBOD, meaning "Just a Bunch Of Drives", is used to refer to two distinct concepts:

Note that neither concept implies data redundancy. The usage is contentious; in careful usage, JBOD refers to the first (independent disks), as there is no other term to refer to this, while concatenation is referred to by unambiguous terms such as SPAN or BIG. For example, in the context of ZFS, JBOD refers to independent drives. 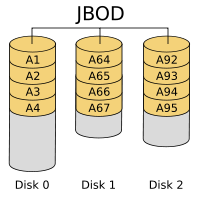 Diagram of a SPAN/BIG ("JBOD") setup.

Concatenation or spanning of disks is not one of the numbered RAID levels, but it is a popular method for combining multiple physical disk drives into a single virtual disk. It provides no data redundancy. As the name implies, disks are merely concatenated together, end to beginning, so they appear to be a single large disk. It may be referred to as SPAN or BIG (meaning just the words "span" or "big", not as acronyms).

In that it consists of an array of independent disks, it can be thought of as a distant relative of RAID. Concatenation is sometimes used to turn several odd-sized drives into one larger useful drive, which cannot be done with RAID 0. For example, one could combine 3 GB, 15 GB, 5.5 GB, and 12 GB drives into a logical drive at 35.5 GB, which is often more useful than the individual drives separately.

Many Linux distributions use the terms "linear mode" or "append mode".

The Mac OS X 10.4 implementation – called a "Concatenated Disk Set" – does not leave the user with any usable data on the remaining drives if one drive fails in a concatenated disk set, although the disks otherwise operate as described above.

Concatenation is one of the uses of the Logical Volume Manager in Linux, which can be used to create virtual drives spanning multiple physical drives and/or partitions.

The initial release of Microsoft's Windows Home Server employs drive extender technology, whereby an array of independent disks are combined by the OS to form a single pool of available storage. This storage is presented to the user as a single set of network shares. Drive extender technology expands on the normal features of concatenation by providing data redundancy through software – a shared folder can be marked for duplication, which signals to the OS that a copy of the data should be kept on multiple physical disks, whilst the user will only ever see a single instance of their data.[1] This feature was removed from Windows Home Server in its subsequent major release.[2]

Greyhole implements what it calls a "storage pool". This pool is created by presenting to the user, through Samba shares, a logical drive that is as large as the sum of all physical drives that are part of the pool. Greyhole also provides data redundancy through software - the user can configure, per share, the number of file copies that Greyhole is to maintain. Greyhole will then ensure that for each file in such shares, the correct number of extra copies are created and maintained on multiple physical disks. The user will only ever see one copy of each file.[3]