Nokia 5800 XpressMusic is a smartphone and portable entertainment device by Nokia.[5] It was introduced on January 2, 2008[6] and released on April 27, 2008.[7] Code-named "Tube", it is the first touchscreen-equipped S60 device by Nokia, the version being s60v5. It's part of the XpressMusic series of phones, which emphasizes music and multimedia playback. The touchscreen features tactile feedback (though it does not use Nokia's Haptikos technology).[8]

The 5800 has a compatibility mode for Java applications that are not touchscreen-aware. It works by using part of the screen for displaying the essential buttons required by the program. 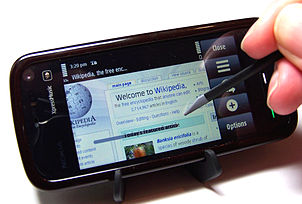 Nokia 5800 XpressMusic on stand, and stylus

The Nokia 5800 XpressMusic is not the first touchscreen device in Nokia's range. In 2004, the Nokia 7700 was announced, a Nokia Series 90 device that was cancelled before it reached the market. This was followed by the Nokia 7710 which was an upgraded version of the 7700 and became available during 2005. Nokia also produced the UIQ-based Nokia 6708 phone in 2005, but this was not an in-house development and was bought in from Taiwanese manufacturer BenQ.[13] Nokia have also produced a range of Maemo-based Internet tablets which have a touchscreen interface, but are not mobile phones by themselves (one can connect and use a phone via Bluetooth). The 5800 is, however, Nokia's first Symbian S60 touchscreen device.

In early February 2009 the website Mobile-Review.com, which was initially very enthusiastic about the handset, published its research and concluded that the Nokia 5800 had a design flaw. Specifically, when phones were used on a daily basis, their earpieces, produced for Nokia under contract by a third party, would cease to function in a very short time. Repairs performed under warranty would only temporarily fix the problem. The defect was found to be in the earpiece design. Nokia's public relations department had admitted that the Nokia 5800 XpressMusic contained this design defect. According to Nokia, they switched to another earpiece manufacturer, so all 5800's produced during February 2009 or later should be free from defect, with previously produced earpieces eligible for free warranty repair. New earpiece parts have also been supplied to Nokia service centres and future phone repairs should permanently fix the defect.[16]

On 21 August 2009, Nokia announced a new variant named Nokia 5800 Navigation Edition. In addition to the normal Nokia 5800 it has the latest version of Ovi Maps pre-installed. It also comes with a car-charger and car-kit inside the box because the GPS decreases the battery life. Both the Nokia 5800 XpressMusic and the 5800 Navigation edition, however, have free lifetime navigation, due to the new version of Ovi maps.[17] It is now available at nokia.com.[18]

A prototype of this handset was seen in the 2008 Batman movie, The Dark Knight and a number of music videos such as Christina Aguilera's "Keeps Gettin' Better", "Womanizer" by Britney Spears, Flo Rida's "Right Round", Pitbull's "Shut It Down", The Pussycat Dolls' "Jai Ho!" and "Hush Hush", Katy Perry's "Waking Up in Vegas" and Cobra Starship's "Good Girls Go Bad". The phone has received generally positive reviews, with UK phone magazine Mobile Choice awarding it a full 5 stars in its January 7, 2009 issue.[19]

Nokia announced the 5800 XpressMusic in London on January 2, 2008. The suggested retail price was €279 before taxes and network subsidies. The phone was made available Q4 2008 in Finland and other markets, specifically in Hong Kong, India, Indonesia, Malaysia, Pakistan, Russia, Spain, Taiwan, Thailand, Ukraine and United Arab Emirates. The phone missed the Christmas sales in more matured markets[dubious – discuss]. Nokia has only commented that it needs time to customize the phone's software for operators in other markets. Analysts speculated the delay as a business manoeuvre not to butcher its existing product portfolio sales for Christmas as the phone is very competitively priced. The phone hit the rest of Europe in early 2009. The European version was available for United States customers on December 14,[20] a North American version was released on February 26 and was briefly pulled soon after due to customers reporting 3G reception issues. It was put back on sale on March 14 after the firmware was updated to fix the issue.[21] It was released in Australia on the 20th of March 2009.

The phone made its worldwide debut in several countries including Russia, Pakistan, Spain, India, Hong Kong, Taiwan, Finland on April 27, 2008.[22] The final pricing of the Nokia 5800 caused outrage amongst Nokia fans on several Internet forums, as it was a 33% increase from the original estimated retail price of €279 (due to the fact that Hong Kong does not have VAT as of 2008, and that the mobile phone doesn't come with Nokia's Comes With Music Service since it hasn't been launched in Hong Kong yet). In Russia it was priced at 14,990 rubles (€350) at the launch without Nokia's Comes With Music Service. This however changed on a wider launch a couple days later, when it started going for US$350.[20]When The phone made it debut in Pakistan it was priced Rs 23000 / $378.Nokia 5800 finally made its debut in Malaysia on Friday, 9 January 2009 after it was first announced in January and February 2008. The device retails for MYR 1499. Nokia threw a party at Pavilion to officiate the release. The phone is already available in India, released on 8 January 2009 by brand ambassador Priyanka Chopra for a retail price of (inclusive of all taxes + VAT)

The price reductions of the Nokia 5800 XpressMusic have resulted in some changes to the standard package/features.

(However in India, regardless of all these removed items, Nokia offers a pair of free Sennheiser headphones worth $55 in the standard package)

Early adopters of the device who bought from the first patch reported[24][25] to experience many problems with the device earpiece and display, and many Youtube videos showed[26][27] how to fix these problems at home. 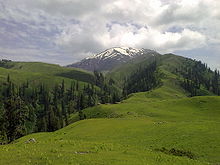 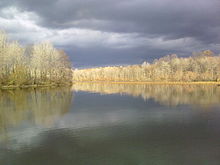 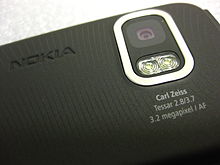 Nokia 5800 XpressMusic has the following specifications:

From firmware version 20.0.012 onwards, the 5800's CPU clock was increased from 369 MHz to 434 MHz, matching the N97 specification.[2] However, improved overall performance can be observed since firmware version 30.

On January 13, 2010, Nokia released a major firmware update, version 40.0.005. The update includes bug fixes, speed improvements and new features. The most visible are kinetic scrolling to all menus (except the main and applications menus) and an improved home screen that was first introduced on the Nokia 5530. This version update also saw the removal of alphanumeric keypad in landscape view during text input. This was replaced by a full QWERTY keyboard. The new home screen provides a contacts carousel, with up to 20 contacts and program shortcuts on screen at the same time. There is a change on option selecting in every menus, but hard to notice; if one selects and holds on that selection, it will be in white, but normal colours when selecting an option is still being red like in v20.

On April 19, 2010, firmware version 50.0.005 was released. This new major update brought some new features available in Nokia N97, such as an upgrade to the existing web browser to version 7.2 and full kinetic scrolling and auto-full screen while browsing the web; a new music player with mini-album art in the song list and the album list, initial letter filtering of track titles in the music player while scrolling using the scroll-bar. As a result, the search function was removed from the music player. A new application called Ovi Sync was installed and the Nokia Music Store received a revamped user interface and was renamed to "Ovi Music". In some regions, Quick Office 4.2.374 is integrated with full free license. Search application's icon was changed and a few more minor updates for better touch sensitivity and tweaks for faster operation of the phone are present. And a little update to the color, the option you select is in silver, but when hold an option, it is still being white like v40. There is also the new feature, one-touch dialling.

Firmware 51.0.006 appeared in August 2010 and contained minor bug fixes and updates to various applications. RDS function, however, remains dysfunctional since version 40.0.005. The web browser has lost its ability to re-flow the text when the page is enlarged. In November 2010, an updated firmware for Nokia 5800 was released for Nokia 5800 as V52.0.007. The firmware update expects

There is still no "pencil" or "select several" ability in the gallery.