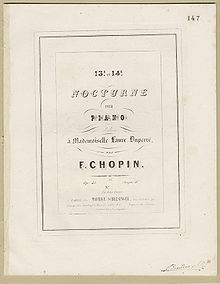 The Nocturnes, Op. 48 are a set of two nocturnes written by Frédéric Chopin in 1841[1] and published the following year in 1842. They are the only two nocturnes in opus 48 and are dedicated to Mlle. Laure Duperré. Chopin later sold the copyright for the nocturnes for 2,000 francs along with several other pieces.[2]

Gustav Barth commented that Chopin's nocturnes are definite signs of "progress" in comparison to John Field's original nocturnes, though the improvements are "for the most part only in technique."[3] However, David Dubal feels that the pieces are "more aptly described as ballades in miniature."[2]

The Nocturne in C minor, Op. 48, No. 1 is initially marked lento and is in 4/4 meter. The piece becomes poco più lento at measure 25 and enters its middle section, which is a chorale. Later, it moves to doppio movimento agitato at measure 49.[4] The piece is a total of 77 measures long. In general, the scheme of the music is ternary form and follows A-B-A'.[5]

The Nocturne in C minor has been categorized as one of Chopin's greatest emotional achievements.[6][7] Theodor Kullak said of the piece, "the design and poetic contents of this nocturne make it the most important one that Chopin created; the chief subject is a masterly expression of a great powerful grief."[7] Jan Kleczyński, Sr. calls the nocturne "broad and most imposing with its powerful intermediate movement, a thorough departure from the nocturne style."[8] Some musical critics, including Charles Willeby and Frederick Niecks, do not think the piece deserves its fame and position; though James Huneker agrees with this assessment, he notes that the nocturne is still "the noblest nocturne of them all."[9] James Friskin found the music to have "the most imposing instrumental effect of any of the nocturnes," calling the crescendo and octaves "almost Lisztian."[10]

Jim Samson notes that the nocturne intensifies "not through ornamentation, but through a new textural background."[11] Kleczytheński commented that the middle section "is the tale of a still greater grief told in an agitated recitando; celestial harps come to bring one ray of hope, which is powerless in its endeavor to calm the wounded soul, which...sends forth to heaven a cry of deepest anguish."[8] The ending, according to Samson, is "in the nature of an elaborated 'feminine ending', articulating the reactive final beat of an amphibrach grouping."[11]

The Nocturne in F-sharp minor, Op 48, No. 2 is initially marked andantino and is in 4/4 meter. It switches to più lento at measure 57 and returns to the original tempo at measure 101. The piece is a total of 137 measures long.

The piece is not as passionate as the Nocturne in C minor.[7] It is muted and the main theme is not as visible. However, it is not emotionless; the muted main theme only covers the motif.[7] The middle section, più lento, is completely different—the piece modulates between minor to major and increases tempo. Frederick Niecks commented that the middle section "is much finer" and contains "soothing, simple chord progressions."[12] Chopin once noted that the middle section was like a recitative and should be played as if "a tyrant commands, and the other asks for mercy."[6] The recapitulation is cut short by the coda that ends in the tonic major.[13]