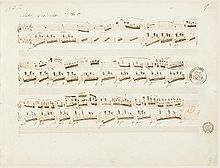 The Nocturnes, Op. 27 are two solo piano pieces composed by Frédéric Chopin often regarded as two of the best pieces he ever composed.[1] The piece was composed in 1836[2] and published in 1837. Both nocturnes in this opus are dedicated to Countess d'Appony.

This publication marked the transition from triplets of nocturnes to contrasting pairs.[3]

Gustav Barth commented that Chopin's nocturnes are definite signs of "progress" in comparison to John Field's original nocturnes, though the improvements are "for the most part only in technique."[4] However, David Dubal feels that the pieces are "more aptly described as ballades in miniature."[5] Blair Johnson states that these two nocturnes are "two of the most powerful—and famous—nocturnes [Chopin] has ever penned" and that these nocturnes are "virtually unrecognizable" to those of John Field.[1] 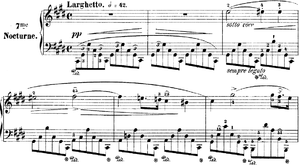 The Nocturne in C-sharp minor is initially marked larghetto and is in 4/4 meter. It transitions to più mosso (more movement) in measure 29. The piece returns to its original tempo in measure 84, and ends in an adagio beginning in measure 99. The piece is 101 measures long and written in ternary form with coda; the primary theme is introduced, followed by a secondary theme and a repetition of the first.

The opening alternates between major and minor and uses arpeggios, commonly found in other nocturnes as well, in the left-hand. It sounds "morbid and intentionally grating" and the effect is superior to that of any other nocturne.[1] James Friskin noted that the piece requires an "unusually wide extension of the left hand" in the beginning and called the piece "fine and tragic."[6] James Huneker commented that the piece is "a masterpiece,"[7] pointing to the "morbid, persistent melody" of the left hand.[7] For David Dubal, the più mosso has a "restless, vehement power."[8] Huneker also likens the più mosso to a work by Beethoven due to the agitated nature of this section.[7] The coda "reminds the listener of Chopin's seemingly inexhaustible prodigality" according to Dubal[8] while Huneker calls it a "surprising climax followed by sunshine" before returning to the opening theme.[7]

The Nocturne in D-flat major is initially marked as lento sostenuto and is in 6/8 meter. It consists of two strophes, repeated in increasingly complex variations. The piece is 77 measures long.

Some of the highly intricate ornamentation in No. 2.

Unlike the Nocturne in C-sharp minor, which was made up of conflicting dramas, the Nocturne in D-flat major consists of variations on a single mood. This causes "functional ambivalence" through "melodic implication" according to Jim Samson.[9] The piece is initially unchanging but is interrupted by a change to the minor subdominant. Blair Johnson calls the main cadence "one of the most glorious moments in Chopin's entire output".[1] Johnson also calls the piece "one of [Chopin's] most graceful essays in fioritura ornamental practices."[1] Huneker states that the piece "really contains but one subject, and is a song of the sweet summer of two souls, for there is obviously meaning in the duality of voices."[10] He also claims that the piece is "harmonically most interesting."[10] Friskin states that the piece contains "broken rhythms and slurs which require a delicate hand touch."[6]

The piece occasionally has been featured in popular culture, such as in the James Bond movie, The Spy Who Loved Me.[1][11]