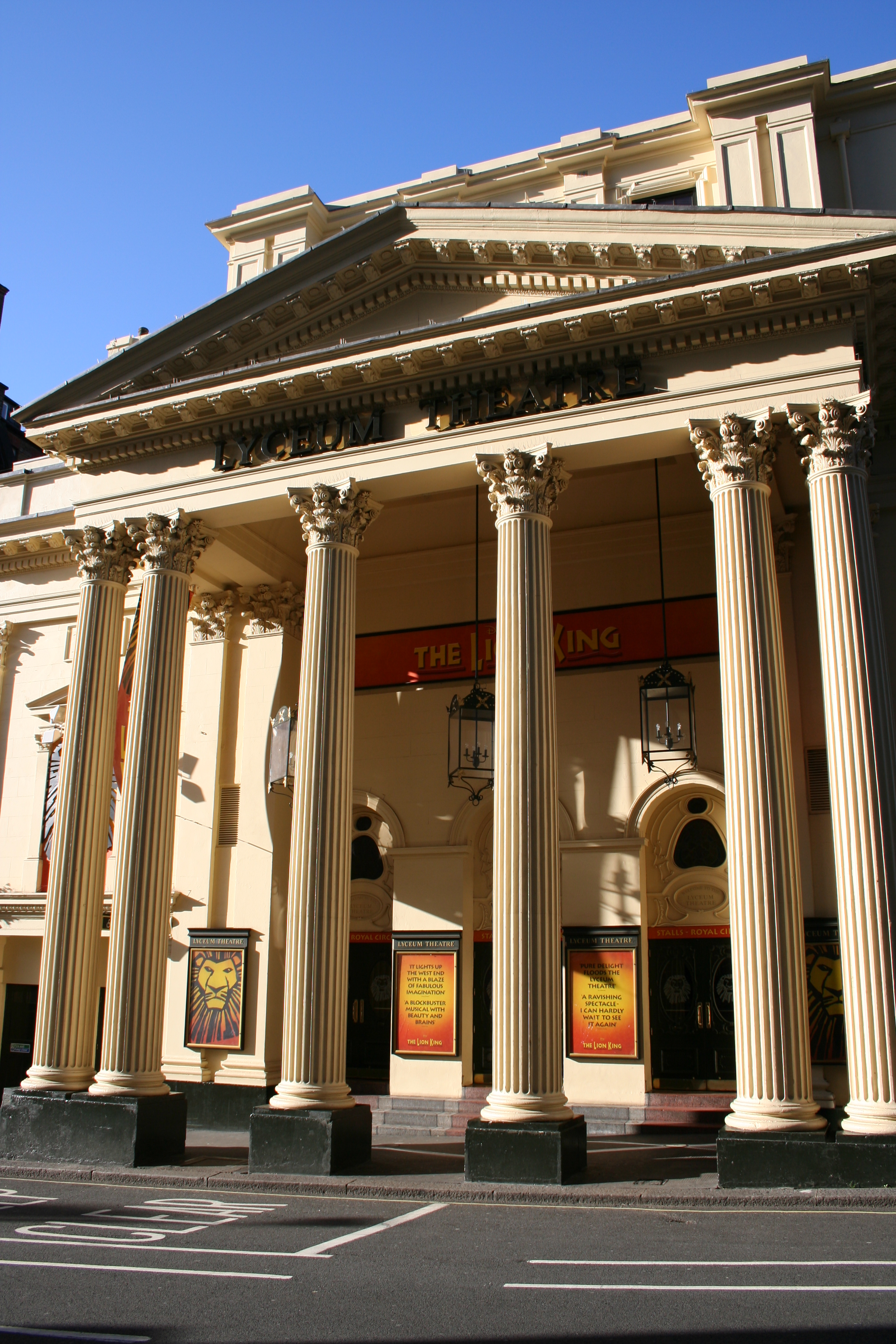 The Lyceum Theatre is a 2,000-seat located in the , on Wellington Street, just off the Strand. There has been a theatre with this name in the locality since 1765, and the present site opened on to a design by . [ [http://www.victorianweb.org/art/architecture/classical/3.html The Victorian Web] ] The building was unique in that it had a balcony overhanging the circle. It was built by the partnership of Peto & Grissell.

The present building retains Beazley's façade and grand portico, but the theatre behind is substantially to the 1904 design of , restored to theatrical use in 1996 by Holohan Architects, after a long period of use as a Mecca Ballroom. [Earl and Sells (2000), pp. 123&ndash;24]

The Old Lyceum Theatre was first built in 1765 on an adjacent site, and in the late 18th century, musical entertainments were given by . Famed actor also performed at the Lyceum. Between 1794 and 1809, the building was used as a circus, brought by when his amphitheatre was burned down at Westminster, and then a chapel, a concert room, and for the first London exhibition of waxworks displayed by in 1802. [ [http://www.uklondontheatretickets.com/lyceumtheatre.html Summary of the theatre's history] ]

The theatre became a "licensed" house in 1809, and until 1812 it was used for dramatic performances by the Drury Lane Company after the burning of their own theatre, until the erection of the new edifice. In 1816, Samuel Arnold rebuilt the house to a design by Beazley and opened it as "The English Opera House", but it was destroyed by fire in 1830. The house was famous as the first theatre in London to be lit by gas and for hosting the London première of 's opera "". [ [http://www.londontown.com/LondonInformation/Entertainment/Lion_King_-_Lyceum_Theatre/04ff/ Londontown profile of the theatre] ] During this period, the "Sublime Society of Beef Steaks," [* [http://www.sublimesocietyofbeefsteaks.org/ History of the Sublime Society of Beef Steaks] ] which had been founded in 1735 by theatre manager Henry Rich, had its home at the theatre for over 50 years until 1867. The members, who never exceeded twenty-four in number, met every Saturday night to eat beefsteaks and drink port wine. [ [http://www.aps.uoguelph.ca/~swatland/rep239nr.htm Information about the Sublime Society of Beefsteaks] ]

In 1834, the present house opened slightly to the west, with a frontage on Wellington Street, [Wellington Street was a new thoroughfare constructed between and . The former site became an unsuccessful arcade, that was demolished to build the (sic), another unsuccessful venture. In 1868, the auditorium was rebuilt and it reopened as the Gaiety Theatre.] under the name "Theatre Royal Lyceum and English Opera House". The theatre was again designed by Beazley and cost £40,000. Composer produced a number of works in the first few years of the theatre, including "The Mountain Sylph" (1834), credited as the first modern English (it was completely sung, with no spoken passages); It was followed by "Fair Rosamund" in 1837, "Farinelli" in 1839 and "Blanche of Jersey" in 1840. In 1841–43, composer managed the theatre and produced National Opera here, but the venture was ultimately unsuccessful. The house then became associated with adaptations of 's novels and Christmas books. [ [http://www.victorianweb.org/mt/theaters/pva234.html Summary of the theatre's history] ] For instance, an adaptation of Dickens' "" ran for over 100 performances from 1844–45 here, a long run for the time.

The Lyceum was later managed by Madame and from 1847–55, who produced 's " [fairy] extravaganzas" featuring spectacular stage effects. 's adaptation of "", with Dickens himself as consultant, played in 1860, shortly after end of its serialisation and volume publication. , who managed the theatre from 1863–67 also favored spectacular productions. In 1866, 's "The Long Strike" (his adaptation of 's Manchester novels "Mary Barton" and "Lizzie Leigh") was produced here. , the mother and grandmother of actors and performed in a number pieces at the theatre in the 1860s. produced three plays here. In 1863, his first professional play, "Uncle Baby", premièred. In 1867, he presented his Christmas , called "Harlequin Cock Robin and Jenny Wren...", and in 1884, he produced the drama "Comedy and Tragedy".

Beginning in 1871, under manager and his wife, appeared at the theatre in, among other things, many works. Irving began with the French melodrama "The Bells", an instant hit in which he played the ghost-haunted burgomaster. The piece ran to sell-out crowds for 150 nights, which was an unusually long run at the time. "Charles I", in 1872 was another hit, running for 180 nights. In 1874, Irving played "" at the theatre, perhaps his greatest triumph, running for 200 nights. In 1878, after Bateman's death, Irving took over management of the theatre from his widow. "The Builder", reported that there was a difference between Irving and Mrs. Bateman regarding the personnel of the company at the Lyceum. "Mr. Irving is said to have told Mrs. Bateman that he was resolved to have actors to act with him, and not dolls, otherwise he would no longer play at the Lyceum. The result was that Mrs. Bateman threw up the management of the theatre, and Mr. Irving takes her place." Mrs. Bateman became the manager of . [ [http://www.theirvingsociety.org.uk/landlord.htm Description of ownership of the Lyceum] ]

". Stoker hoped that Irving, with his dramatic, sweeping gestures, gentlemanly mannerisms, and speciality in playing villain roles, would play Dracula in the stage adaptation of his novel. However, Irving never agreed to appear in the stage version, although the play was produced at the Lyceum.

When Irving and Terry toured America, as they did several times beginning in 1883, the theatre played works with many famous actors including John Forbes-Robertson, , and . Martin Harvey, a pupil of Irving's played a season there in 1899. appeared as in the summer of 1898.

In 1904, the theatre was rebuilt and richly ornamented in style by , retaining only the façade and portico of the original building. The theatre presented and variety, in an attempt to compete with the and the London Coliseum, but this was not a success, and the theatre soon returned to presenting drama. From 1909–38 the Melville Brothers ran a successful series of spectacular melodramas. [ [http://www.uklondontheatretickets.com/lyceumtheatre.html Profile of the theatre] ] In 1919, additional minor alterations to the theatre were made by Edward Jones. Between the wars, dramas played at the theatre for ten months each year, followed by Christmas pantomimes, including "Queen of Hearts" in 1938. The Lyceum was the last London theatre to continue the early practise of concluding pantomimes with a , a free standing entertainment of slapstick clowning, juggling and tumbling. The tradition ended with the closure of the theatre in 1939. [ [http://www.its-behind-you.com/development.html "The Development of Pantomime" (It's Behind You!)] accessed 17 Oct 2007]

In 1939, the bought the building, with plans to demolish it to make room for road improvement. The theatre closed that year with a landmark performance of "Hamlet" directed by Sir (Ellen Terry's great nephew). [cite news|title=Lyceum Theatre - 'Hamlet' by William Shakespeare|publisher=|date=|page=12] The road improvement plans collapsed, and after the war, in 1951, it was converted to a huge ballroom and reopened by Matthews and Sons, as the "Lyceum Ballroom". Many big bands played here, including the which performed frequently. In the 1960s and 1970s, the theatre was used as a pop concert venue and for television broadcasts. , , , , , , and all played here. [ [http://www.londontown.com/LondonInformation/Entertainment/Lion_King_-_Lyceum_Theatre/04ff/ Londontown profile of the theatre] ] Genesis recorded and filmed there in May 1980 for broadcast on the "". The footage also appeared on the 2007 CD/DVD re-release of their 1980 album "Duke".

A proposed redevelopment of by the GLC in 1968 saw the theatre under threat, together with the nearby Vaudeville, Garrick, Adelphi and Duchess theatres. An active campaign by Equity, the Musicians' Union, and theatre owners under the auspices of the "Save London Theatres Campaign" led to the abandonment of the scheme.

The theatre went dark in 1986, after the National Theatre's promenade performances (in 1985) of 's adaptation of the "Mysteries" trilogy. Brent Walker leased the theatre during this time but later gave up his lease, and in 1996 it was restored and reconverted into a theatre for large scale musicals or opera (with a suitably large orchestra pit) by Holohan Architects.

The theatre has been home to the musical version of "The Lion King" since 1999.

The nearest station is Covent Garden.