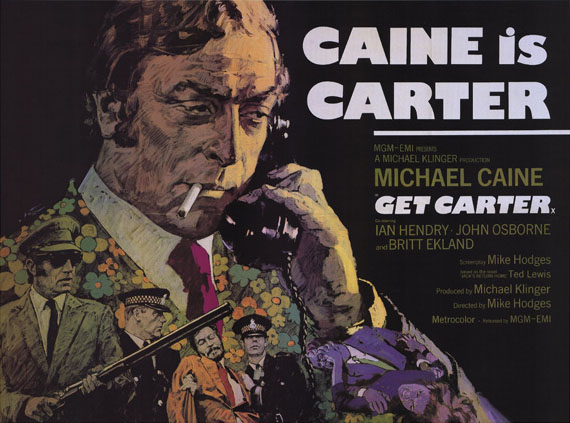 "Get Carter" is a 1971 crime directed by and starring as Jack Carter, a mobster who sets out to avenge the death of his brother in a series of unrelenting and brutal killings played out against the grim background of derelict urban housing in the northern English city of . The film was based on Ted Lewis' 1969 novel "", itself inspired by the real life in the north east of England.

The film was Hodges' first job as director; he also wrote the film's script. The film went from novel to finished film in just eight months, with location shooting in Newcastle and lasting just forty days. The film was produced by Michael Klinger and released by .This film was also Alun Armstrong's film debut.

In 1999, "Get Carter" was ranked 16th on the of the 20th century; five years later, a survey of British film critics in magazine chose it as the greatest British film of all time. [ [http://news.bbc.co.uk/1/hi/entertainment/film/3711460.stm "Get Carter" tops British film poll] BBC News, 3 October 2004] "Get Carter" was remade in 2000 under the same title, with starring as Jack Carter. appears as Cliff Brumby and plays the villain Cyrus Paice. This remake was not well-received by critics.

Newcastle-born gangster Jack Carter has moved to London to work for British mob boss Gerald Fletcher (). As the film opens, Jack returns to Newcastle to attend the funeral of his brother, Frank, who died in what was officially listed as a drunken car accident. However, Jack suspects he was murdered and sets out to uncover the truth. After setting himself up with a room in a small boarding-house, Jack re-establishes links with his family and past associates. After Jack questions local loan shark Cyril Kinnear (), rival henchmen threaten Carter and warn him to leave town, but he violently attacks them. When he forces one of the henchmen to give him a name of someone who might be involved in Frank's death, he learns the name "Brumby."

Cliff Brumby () is a ruthless mob enforcer with a controlling interest in local arcades. After Jack accosts him, he realizes that the thugs gave Brumby's name as a red herring to throw him off the trail. In Jack's absence, the rivals return, and attack the boarding house landlady (). The following morning, Fletcher sends two strong-arm henchmen to get Jack to return to London, but Jack forces them back with a shotgun and escapes. The fact that so many people want him out of Newcastle only strengthens his suspicions.

With Fletcher's men in pursuit, Jack meets with Brumby at the , who pegs Kinnear as Frank's killer and offers him £5,000 to kill him, which Jack refuses. After Jack discovers that his niece Doreen was an unwilling participant in an amateur pornographic film filmed in Kinnear's apartment, he becomes enraged. (There is some indication that Doreen is actually Jack's daughter due to an illicit affair with his sister-in-law.) Jack concludes that Frank knew about the films and was killed before he could expose them.

Jack's subsequent revenge is unrelenting and brutal, played out against the grim background of Tyneside in the early 1970s, a world of smoky bars, s and derelict urban housing. Jack takes out each of his enemies with no remorse and utter brutality. Particularly brutal is Carter's murder via a fatal injection of heroin, of Margaret, an attractive leather-skirted prostitute whom his brother, Frank, "saw once a week". Stripped of its PVC coat, her body is left in the grounds of Kinnear's mansion. Jack then calls the police to raid the residence during a wild party. The arrests destroy what is left of Kinnear's reputation.

Jack meanwhile chases the last of his brother's killers along an ugly industrial black shoreline littered with piles of coal slag, gets him drunk, as he did Frank, and kills him.

As Jack tosses his gun into the sea, a paid hitman (known only as "J", the initial on his signet ring), who was contacted by Kinnear the previous evening, shoots him with a sniper rifle. (This character was actually first seen at the start of the film sharing the railway carriage with Jack in an otherwise unexplained coincidence). The film ends with a shot of Carter's corpse as the waves wash over him.

Other roles included:
* as gang over-boss Cyril Kinnear
* as small-time gangster Eric Paice
* as businessman Cliff Brumby
* as gangster Con McCarty
* as gangster Peter the Dutchman
* as gambler Albert Swift and Carter's childhood friend
* as London gang boss and Carter's boss Gerald Fletcher
* as a work colleague of Frank Carter's
*Alun Armstrong as Keith, another work colleague of Frank's
* as Thorpe, a gangster
* as Frank's daughter Doreen
* as Kinnear's moll Glenda (who is also sleeping with Brumby in exchange for the use of a penthouse flat)
* as Margaret, a married woman whom Frank Carter saw 'once a week'
* as B&B owner Edna Garfoot
* as Anna, the mistress of Carter's boss Gerald Fletcher. She is also having relations with Carter and plans to run away to South America with him after Carter avenges his brother's death.
* as Sid Fletcher
*Kevin Brennan as Harry
* as Architect
* as Architect

The distinctive music in the film was composed by , a jazz and "easy listening" specialist, who worked well outside his previous boundaries for this film. The much admired theme tune features the sounds of Caine's train journey from to Newcastle. All the music was played by Budd and two other jazz musicians, Jeff Clyne () and Chris Karan (). The soundtrack was first released on CD by the Cinephile label in 1998 (it had previously only been released in Japan). It has often been used as incidental music for TV programmes and adverts, most with no connection to the film.

The influential Human League album "Dare" contains a track covering the "Get Carter" theme, although it was only a version of the sparse that opens and closes the film as opposed to the full-blooded jazz piece that accompanies the train journey. also covers 's theme on their album "", although they call their version "Get Carter", as opposed to its proper title, "Main Theme (Carter Takes A Train)". This Stereolab version was subsequently used as a sample in the song "Got Carter" by 76.

The the Hussars, also appear.

Initial critical reception was poor, especially in the United Kingdom: "soulless and nastily erotic...virtuoso viciousness", "sado-masochistic fantasy", and "one would rather wash one's mouth out with soap than recommend it". The much-respected American film critic , however, was a fan of the film, admiring its 'calculated soullessness'. A minor hit at the time, the film has become progressively rehabilitated via subsequent showings on television; with its harsh realism, quotable dialogue and incidental detail, it is now considered among the best British gangster films ever made. In 2004, the "" claimed it to be the greatest British movie in any genre.

There are two slightly different versions of this film. In the opening scene of the original version Gerald Fletcher warns Carter that the Newcastle gangs 'won't take kindly to someone from The Smoke poking his bugle in'. This was later redubbed (not by ) for American release with 'won't take kindly to someone from London poking his nose in', as tape previews in the US had revealed that many Americans did not understand what 'Smoke' and 'bugle' meant in this context. "Smoke" is slang for London, in reference to its reputation as a foggy city, while "bugle" is slang for nose.

Also the line 'I smell trouble, boy' is edited out, for no apparent reason. DVD releases within the United Kingdom under the 'Iconic Films' label do not have these changes.

"Get Carter" was remade in 2000 under the same title, with starring as Jack Carter. appears as Cliff Brumby and plays the villain Cyrus Paice. This remake was not well-received by critics."Hit Man", a 1972 film starring and , is also a scene-for-scene remake, crediting Ted Lewis in the opening titles.

The novel on which the film was based, "Jack's Return Home", unlike the film, is not set in a clearly defined area. The film, however, is set exclusively in Newcastle and .

The most talked-about location in the film is the , which became iconic after its inclusion in the film. Corrupt local businessman Cliff Brumby () gives Jack Carter () a tour of the incomplete roof top cafe, stating that he is in the process of developing it into a restaurant. Carter later throws Brumby from the same location. The car park has attracted much interest from across the world due to its inclusion, and is also admired for its 1960s architecture. The shopping centre on which the car park stands closed for redevelopment in early 2008. Gateshead Council have confirmed that that the car park itself will close for good by the 8th June 2008 at the earliest. It is set to be demolished sometime soon. [http://news.bbc.co.uk/1/hi/england/tyne/7631112.stm]

Other locations in Northumberland and County Durham were also used. The location for the ending was the beach at , six miles north of . At that time (it was shot in August 1970), waste from the pit was still being tipped directly into the . Since the closure of the [http://www.dmm-gallery.org.uk/gallery/b006-012.htm collieries] , the beach is now somewhat cleaner than the blackened wasteland over which Carter pursues Eric, although seacoal residues are still plentiful.

The poster (illustrated) does not represent the film accurately. Carter is never seen wearing anything as gaudy as a jacket, Eric does not carry a gun at any point (indeed, the gun shown in the poster closely resembles Carter's), and the grappling man and woman do not resemble any characters in the film. The only fight of this kind depicted in the finished work is between two women in the that Carter visits, mid way through the film. The only part of the that is in any way accurate is the depiction of Kinnear struggling in police hands.

Promotional shots exist from the film showing Carter holding a , despite the fact that the only shotgun used by Carter is a which Jack finds on top of his brother Frank's wardrobe. (A sawed-off is used by Peter in an unauthorized attempt to kill Carter at the ferry landing.) The first shot (found in some books about Gangster films) shows him pointing the gun at the camera and to a person who has not seen the film would appear to be an actual still. The second (found on the back of some DVD covers, i.e. the Australian release of the film) is more clearly a promotional shot and shows Carter posing with one arm around Anna (Britt Ekland) and the other holding the pump action shotgun by his side.