No 1417 (Leigh Light Trials) Flt[2] was a Royal Air Force flight established to carry out trials and develop tactics for the use of ASV Radar/Leigh Light equipped Vickers Wellington GR Mk VIII maritime reconnaissance-bombers. Formed on 8 January 1942 at RAF Chivenor 1417 Flight was re-formed as No. 172 Squadron RAF from 4 April 1942 onwards. [3]

1417 (Communication) Flight was re-incarnated on 1 November 1953, as a communications unit in the Middle East, at RAF Muharraq, Bahrain with Avro Anson XIX and Percival Pembroke C.1. Once again 1417 Flight formed the basis of a full squadron when No. 152 Squadron RAF was formed at Bahrain on 29 September 1958 under the command of Flt. Lt. F. Rimmer, flying Percival Pembroke C Mk.1 transport aircraft, [4]

From 1956 Gloster Meteor FR Mk.9 aircraft from No. 208 Squadron RAF were deployed to Aden for operations against rebel tribesmen and Yemeni insurgents. This Squadron was withdrawn at the time of the Suez Crisis, but some aircraft returned from 1958 to 1960 operated by the Arabian Peninsular Reconnaissance Flight.[5]

The reconnaissance (recce) task at Aden was taken over by No. 8 Squadron RAF, from 1960, flying Hawker Hunter FGA Mk9 and FR Mk,10 aircraft. Lack-lustre results from recce missions and difficulties maintaining the recce jets prompted the forming of a dedicated recce flight as No.1417 (Fighter Reconnaissance) Flight, flying the five FRMk.10 Hunters from 8 Squadron and a T Mk7 two seat Hunter. [6]

The five aircraft were given tactical codes to represent the initials of the five pilots: RP for Roger Pyrah, JM for Johnny Morris, PL for Peter Lewis, JM for Jim Dymond and GT for Geoff Timms. (Geoff Timms was to carry on flying fast jets well into his sixties, becoming probably the oldest active fast-jet pilot in the RAF, until retiring to the Harrier Simulator at RAF Wittering in the early 1990s.) [7]

March 1965 was a busy month with the pilots, groundcrew and aircraft of 8 Squadron, plus two 1417 Flight FR.10s departing Khormaksar for a two-week detachment to RAF Masirah, an island in the Gulf of Oman, to undergo strike and photo recce training in an area not familiar to many pilots. The detachment left on 8 March 1965 and returned on 19 March 1965.

The following table of flying hours for Khormaksar in March 1965 aircraft illustrates that the Hunter FRMk10's of 1417 Flight were well utilised, with each aircraft averaging well over 20 hours flying for that month.

A typical month saw 1417 flight fly 63 recce missions in June 1964, which was quite an achievement considering there were only five pilots and five aircraft, with some on standby duty at up-country airfields and other normal flying and training being carried out simultaneously.

1417 Flight continued providing pre and post strike reconnaissance up to the draw-down of British forces in Aden. Missions were carried out on a daily basis until 1417 Flight was disbanded and re-absorbed into 8 Squadron on 8 September 1967, shortly after evacuating to RAF Muharraq at Bahrain. [9] [10] [11] 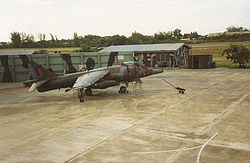 In 1975, with Guatemala in the grip of a bloody civil war, there was a real fear that Guatemalan forces might invade Belize and at the very least widen their Caribbean coastline. To bolster the resident British Army garrison, a detachment of six Hawker Siddeley Harrier GR.1As from No. 1 Squadron RAF was sent to the international airport at Ladyville in November 1975. There they set about waving the flag and discouraging Guatemalan aggression. After several months the threat was perceived to have subsided and the Harriers returned to the UK in April 1976, only to return on a more permanent basis in June 1977, as part of a complete package, of the Queen's regiment of the British army, in a Vickers VC10 C1 and six Harriers from No 1 (Fighter) Squadron flying direct with support from ten Handley Page Victor tankers.[12] 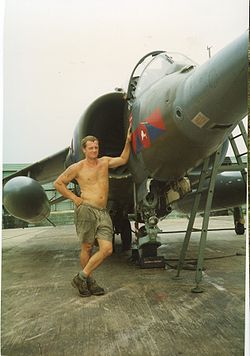 Thus was born HarDet Belize; the six aircraft were operated from semi-permanent hides, named using the NATO phonetic alphabet. Alpha and Bravo hides were set up in the grounds of the Belikin brewery outside the gates to the garrison; Charlie and Delta hides were set up on the other side of the garrison access road. Echo hide either never existed or formed the basis of the Tie-down engine running pan at the eastern end of the runway. Foxy (contracted from Foxtrot) and Golf hides were set up around the airport fire station (which remained active), even using some of the fire station buildings. Hotel, India and Juliet hides were arranged around the access taxiway to Williamson Hangar and the edge of the airport apron.

After operating as a rotating roulement for two years, the Hardet was put on an even more permanent footing with the formation of 1417 (Tactical Ground Attack) Flight from 18 April 1980 until closure on 6 July 1993.[1] Much flying was done, with plenty of flag-waving and sabre-rattling, the aircrew enjoying the post due to the lack of restrictions, and challenging missions.[citation needed] Eventually operations were confined to Charlie/Delta and Foxy/Golf hides which went through a slow metamorphosis to permanent semi-hardened hides with concrete surfaces and taxi-ways and block built buildings (including accommodation, kitchen and bars).

Several aircraft were lost due to various reasons, but one of the most spectacular incidents occurred when XZ132 encountered a large vulture which tore straight through the birdstrike armour in the intake, making a large hole in one of the forward fuselage fuel tanks. The contents of the fuel system promptly gushed out of this hole, causing a large cloud of fuel vapour as the aircraft approached to land. After stopping on the runway, the pilot could see the damage caused by the vulture and said he would have ejected if he had known the extent of the damage. XZ132 was casevaced back to the UK, repaired and sent off to war in the Falkland Islands, albeit with a leaking front tank.

Harriers of 1417 Flight were also instrumental in securing diplomatic assurances for the future of Belize, after taking part in air shows at La Aurora International Airport, Guatemala City, for the 69th and 70th anniversaries of the Guatemalan Air Force, in 1990 and 1991, supported by a Puma from No. 1563 Flight RAF.