Nissanka Malla (Sinhala, නිස්සංක මල්ල), also known as Kirti Nissanka and Kalinga Lokesvara was a king of Sri Lanka who ruled the country from 1187 to 1196.[1] He is known for his architectural constructions such as the Nissanka Lata Mandapaya, Hatadage and Rankot Vihara, as well as for the refurbishment of old temples and irrigation tanks.

Nissanka Malla declared that only a Buddhist had the right to rule the country, thereby securing his position and justifying his claim for kingship. He spent large sums for various constructions and refurbishments, and also gifted money to the public in an attempt to put down crimes. He maintained cordial relationships with several countries, and also invaded the states of the Pandyans and Cholas in South India.

A rock inscription made by Nissanka Malla at Dambulla mentions that he is of the Kalinga Dynasty and a descendant from the race of King Vijaya. Another inscription at Ruwanwelisaya describes him as being a member of a royal family of Kalinga, born at Sinhapura. The inscription there reads;[2]

...having come from the royal line of the Ikshvaku family having become like a forehead mark to the royal family of Kalinga emperors born at Sinhapura...

Nissanka Malla's year of birth is 1157 or 1158.[3] He was the son of Queen Parvati and King Jayagopa. This is mentioned in a rock inscription made by Nissanka Malla at Galpota. This inscription describes Jayagopa as being the reigning king of Sinhapura. Nissanka Malla had two wives named Kalinga Subadradevi and Gangavamsa Kalyanamahadevi.[2] He was also a son-in-law or nephew of Parākramabāhu I.[3]

Nissanka Malla came to Sri Lanka under the invitation of Vijayabâhu II, who succeeded Parākramabāhu the Great, and was appointed as Vijayabâhu's Aepa (sub-king).[2] Vijayabâhu was killed by Mahinda VI of the Kalinga Dynasty. Mahinda VI reigned for only five days before Nissanka Malla killed him and assumed the throne himself in 1187.[4]

By claiming to be descended from Vijaya, the first king of Sri Lanka, Nissanka Malla justified his right to the throne.[3] He secured his position further by declaring that the ruler of Sri Lanka should adhere to Buddhism.[5] His rock inscription at Galpotha describes this, saying that "non-Buddhists should not be placed in power in Sri Lanka to which the Kalinga dynasty was the rightful heir".[6]

He is also known as Kirti Nissanka and is referred to in some records as Kalinga Lankesvara. His rock inscriptions refer to him in names such as "Fountain of renown", "Protector of the Earth" and "Lamp by which the whole world was illuminated".[7]

Heavy taxes that were imposed by Parākramabāhu I were largely reduced by Nissanka Malla.[3] He gifted money, gold, cattle, land and other items of value to the public. This was seen by him as an act to "put down robbery", since he believed that they resorted to robbery because of oppression and severe taxation.[8] However, Nissanka Malla tried to outdo the accomplishments of Parākramabāhu I with his constructions, which later led the kingdom becoming almost bankrupt.[9] 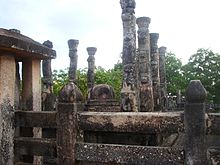 The Nissanka Latha Mandapaya, constructed by Nissanka Malla is a unique type of building. It contains 8 granite pillars which were used to support a roof.[12] The pillars are carved out of granite in the form of lotus stems with opening lotus buds on the tops, and are positioned on a platform.[13]