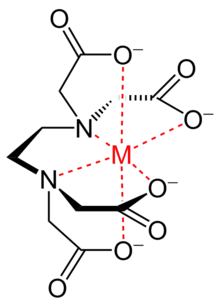 Chelation is the formation or presence of two or more separate coordinate bonds between a polydentate (multiple bonded) ligand and a single central atom.[1] Usually these ligands are organic compounds, and are called chelants, chelators, chelating agents, or sequestering agents.

The ligand forms a chelate complex with the substrate. Chelate complexes are contrasted with coordination complexes composed of monodentate ligands, which form only one bond with the central atom.

Chelants, according to ASTM-A-380, are "chemicals that form soluble, complex molecules with certain metal ions, inactivating the ions so that they cannot normally react with other elements or ions to produce precipitates or scale."

The word chelation is derived from Greek χηλή, chelè, meaning claw; the ligands lie around the central atom like the claws of a lobster.[2] 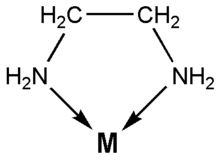 The chelate effect describes the enhanced affinity of chelating ligands for a metal ion compared to the affinity of a collection of similar nonchelating (monodentate) ligands for the same metal.

Consider the two equilibria, in aqueous solution, between the copper(II) ion, Cu2+ and ethylenediamine (en) on the one hand and methylamine, MeNH2 on the other.

An equilibrium constant, K, is related to the standard Gibbs free energy, ΔG

where R is the gas constant and T is the temperature in kelvins. ΔH

is the standard enthalpy change of the reaction and ΔS

is the standard entropy change.

It has already been posited that the enthalpy term should be approximately the same for the two reactions. Therefore the difference between the two stability constants is due to the entropy term. In equation (1) there are two particles on the left and one on the right, whereas in equation (2) there are three particles on the left and one on the right. This means that less entropy of disorder is lost when the chelate complex is formed than when the complex with monodentate ligands is formed. This is one of the factors contributing to the entropy difference. Other factors include solvation changes and ring formation. Some experimental data to illustrate the effect are shown in the following table.[3]

These data show that the standard enthalpy changes are indeed approximately equal for the two reactions and that the main reason why that the greater stability of the chelate complex is due to the entropy term, which is much less unfavourable, indeed, it is favourable in this instance. In general it is difficult to account precisely for thermodynamic values in terms of changes in solution at the molecular level, but it is clear that the chelate effect is predominantly an effect of entropy.

Other explanations, Including that of Schwarzenbach,[4] are discussed in Greenwood and Earnshaw (loc.cit).

Virtually all biochemicals exhibit the ability to dissolve certain metal cations. Thus, proteins, polysaccharides, and polynucleic acids are excellent polydentate ligands for many metal ions. Organic compounds such as the amino acids glycine and histidine, organic diacids such as malate, and polypeptides such as phytochelatin are also typical chelators. In addition to these adventitious chelators, several biomolecules are specifically produced to bind certain metals (see next section).[5][6][7][8]

In biochemistry and microbiology

Virtually all metalloenzymes feature metals that are chelated, usually to peptides or cofactors and prosthetic groups.[8] Such chelating agents include the porphyrin rings in hemoglobin and chlorophyll. Many microbial species produce water-soluble pigments that serve as chelating agents, termed siderophores. For example, species of Pseudomonas are known to secrete pyocyanin and pyoverdin that bind iron. Enterobactin, produced by E. coli, is the strongest chelating agent known.

In earth science, chemical weathering is attributed to organic chelating agents, e.g. peptides and sugars, that extract metal ions from minerals and rocks.[9] Most metal complexes in the environment and in nature are bound in some form of chelate ring, e.g. with a humic acid or a protein. Thus, metal chelates are relevant to the mobilization of metals in the soil, the uptake and the accumulation of metals into plants and micro-organisms. Selective chelation of heavy metals is relevant to bioremediation, e.g. removal of 137Cs from radioactive waste.[10]

In the 1960's, scientists developed the concept of chelating a metal ion prior to feeding the element to the animal. They believed that this would create a neutral compound, protecting the mineral from being complexed with insoluble salts within the stomach, rendering the metal unavailable for absorption. Amino acids, being effective metal binders, were chosen as the prospective ligands, and research was conducted on the metal-amino acid combinations. The research supported that the metal-amino acid chelates were able to enhance mineral absorption.

During this period, synthetic chelates were also being developed. An example of such synthetics is ethylenediaminetetraacetic acid (EDTA). These synthetics applied the same concept of chelation and did create chelated compounds; however, these synthetics were too stable and not nutritionally viable. If the mineral was taken from the EDTA ligand, the ligand could not be used by the body and would be expelled. During the expulsion process the EDTA ligand will randomly chelate and strip another mineral from the body.[11]

According to the Association of American Feed Control Officials (AAFCO), a metal amino acid chelate is defined as the product resulting from the reaction of a metal ion from a soluble metal salt with a mole ratio of one to three (preferably two) moles of amino acids. The average weight of the hydrolyzed amino acids must be approximately 150 and the resulting molecular weight of the chelate must not exceed 800 Da.

Many mineral deficiencies can occur in plants, such as iron chlorosis, which can reduce the nutritional benefits of crops and eventually result in plant death. Mineral chelates have been used to alleviate the mineral deficiencies of affected crops through liquid foliar applications. These fertilizers are also used to prevent deficiencies from occurring and improving the overall health of the plants. [13]

Chelation therapy is the use of chelating agents to detoxify poisonous metal agents such as mercury, arsenic, and lead by converting them to a chemically inert form that can be excreted without further interaction with the body, and was approved by the U.S. Food and Drug Administration in 1991. In alternative medicine, chelation is used as a treatment for autism, although this practice is controversial due to the absence of scientific plausibility, lack of FDA approval, and its potentially deadly side-effects.[14]

Although they can be beneficial in cases of heavy metal poisoning, chelating agents can also be dangerous. Use of disodium EDTA instead of calcium EDTA has resulted in fatalities due to hypocalcemia.[15]

Antibiotic drugs of the tetracycline family are chelators of Ca2+ and Mg2+ ions.

EDTA is also used in root canal treatment as a way to irrigate the canal. EDTA softens the dentin facilitating access to the entire canal length and to remove the smear layer formed during instrumentation.

Chelate complexes of gadolinium are often used as contrast agents in MRI scans.

Homogeneous catalysts are often chelated complexes. A typical example is the ruthenium(II) chloride chelated with BINAP (a bidentate phosphine) used in e.g. Noyori asymmetric hydrogenation and asymmetric isomerization. The latter has the practical use of manufacture of synthetic (–)-menthol.

Products such as Evapo-Rust are chelating agents sold for the removal of rust from iron and steel.