In Poland any person holding a Magister's degree in law is called "jurist" or "lawyer" (Polish: prawnik). The licensed legal professions are as follows: 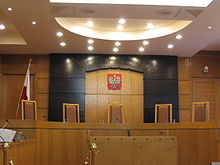 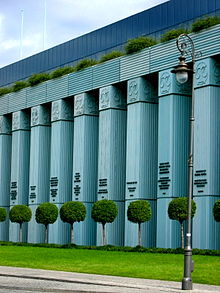 Columns of the Supreme Court of Poland building

Some legal professions may also be performed by graduates in other specific disciplines, such as economy or engineering. They require an appropriate admission examination to be passed, as such jurists are authorised to represent persons before courts in matters related to their profession. Such occupations include inter alia:

The distinction between advocates and legal advisors

The division adwokat / radca prawny was created by a 1959 law which forbade advocates from advising socialised economy units (primarily state enterprises, and cooperatives, which were the dominant form of economic activity in the People's Republic of Poland), and introduced the new profession of radca prawny for that purpose.

1. Advocates and legal advisors have their own independent bar associations (both are members of CCBE - The Council of Bars and Law Societies of Europe); membership is obligatory in order to practice the respective profession:

Currently, admission to the Polish Bar Council is completely open to the members of the National Chamber of Legal Advisors, and vice versa. Lawyers can be members of both bar associations at the same time, however they cannot practice both professions concurrently.

3. The two bar associations have their own deontology and ethical codes according to which:[2][3]

- holding the manager's position in another person's business entity;
- holding the position of a member of the management board or proxy in commercial partnerships and companies, with the exception of law firms;
- acting as a regular commercial agent;
- running the same office with a person rendering other services, it they collide with advocates' ethical rules.

There are no bar associations for judges and public prosecutors - the Ministry of Justice is in charge of administration of the professions (judges are appointed by the President). Advocates, legal advisors, notaries, bailiffs, patent attorneys, and tax advisors do have their bar associations.

There are several ways of admission to the bar. As to advocates and legal advisors, the following options are available:[4][5]

Bar training for advocates and legal advisors lasts for three years and consists of theoretical and practical classes. Each trainee (Polish: aplikant) has his/her individual tutor, which must be a practitioner from the respective bar. Bar examination is a written test, where theoretical questions are followed by cases.

The body charged of training for future judges and public prosecutors is The National School of Judiciary and Public Prosecution in Kraków.[6] After one-year general training, the candidates proceed to a specialised training (judge/public prosecutor) for another 30 months. Then, trainee judges serve internships as law clerks (12 months) and as referendaries (Polish: referendarz). Similar internship is provided for public prosecutors.[7]

Once admitted to the bar association of one occupation, a jurist can move to another occupation with little hassle.[4][5]

Only judges, public prosecutors, notaries, professors and habilitated doctors of laws can write certoriaris to the Constitutional Tribunal in cases in which they themselves are sides. All others must use the services of advocates or legal advisors.[8] Certioraris to the Supreme Court must always be prepared by an advocate or a legal advisor.[9]

Lawyers not members of any bar association

Many jurists do not practice law in the strict sense. They may work in public administration (which has its own highly legalized proceedings), the police (which prosecute small crimes), tax services and similar governmental agencies. Additionally, since a company can be represented in civil court by its own employees, some small and medium companies do not employ barristers or counselors, but instead rely on in-house lawyers not admitted to bar.

Because under Polish law an agent can act for any person therefore some lawyers do what in the UK is being done by solicitors. Thus, specialized persons write legal agreements, perform negotiations, or execute debts. Polish law specifically permits persons with Magister's degree in Law to give legal advice.

There are numerous law firms localized in Poland - both: minor and huge affiliates of international law offices. Mostly, the said international law firms have their seats in Warsaw. Notwithstanding this division, there are lawyers who povide legal assistance within their individual practices.