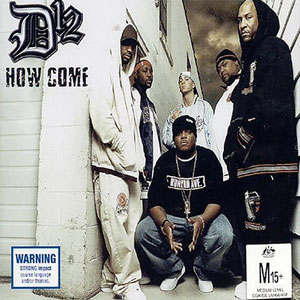 "How Come" is a rap single by the rap group D12. It is the second single from their second album "". The song is about the dispute between D12 and and how they were, at the time, not speaking to each other. However Royce Da 5'9" has stated he believes this track is not about him. The song was certified Gold by the . [ [http://www.riaa.com/goldandplatinumdata.php?table=SEARCH_RESULTS RIAA ] ]

The video depicts members of D12 fighting with in the Shady Records studio. It shows a detailed strain on the members relationships. They discuss how Shady rose to stardom, and they can't get a deal. They envy , but he doesn't think there is anything to envy, the song ends, leaving people wondering, with the members dissatisfied.

Bizzare and Swifty also recorded verses for the track, however they were both edited out for a shorter version of the track. A full version of the song including Bizzare's and Swifty's verses can be heard on YouTube.

A cover version was made by the British rock band Embrace for their live performances. This version is shortened to Eminem's lyrics on the song, cutting out and . [ [http://www.contactmusic.com/new/xmlfeed.nsf/mndwebpages/embrace%20to%20embrace%20rap Embrace - Embrace To Embrace Rap ] ] When the video is played for this song, the song often joins onto a shortened version of the D12 song, "Git up."