The Others is a 2001 psychological horror film by the Spanish-Chilean director Alejandro Amenábar, starring Nicole Kidman. It is inspired partly by the novella The Turn of the Screw.[2]

It won eight Goya Awards, including awards for Best Film and Best Director. This was the first English-language film ever to receive the Best Film Award at the Goyas (Spain's national film awards), without a single word of Spanish spoken in it. The Others won Best Horror Film at the Saturn Awards, and Kidman received a Golden Globe and BAFTA nomination.

Grace Stewart (Kidman) is a Catholic mother who lives with her two small children in a remote country house in the British Crown Dependency of Jersey, in the immediate aftermath of World War II. The children, Anne (Alakina Mann) and Nicholas (James Bentley), have an uncommon disease characterized by photosensitivity, so their lives are structured around a series of complex rules designed to protect them from inadvertent exposure to sunlight.

The new arrival of three servants at the house — an aging nanny and servant named Mrs. Bertha Mills (Fionnula Flanagan), an elderly gardener named Mr. Edmund Tuttle (Eric Sykes), and a young mute girl named Lydia (Elaine Cassidy) — coincides with a number of odd events, and Grace begins to fear that they are not alone. Anne draws pictures of four people: a man, a woman, a boy called Victor, and an old woman, all of whom she says she has seen in the house. A piano is heard from inside a locked room when no one is inside. Grace finds and examines a "book of the dead," which shows mourning portraits taken in the 19th century of recently deceased corpses. Doors which Grace believes to have been closed are found mysteriously ajar. Grace tries hunting down the "intruders" with a shotgun but cannot find them. She scolds her daughter for believing in ghosts — until she hears them herself. Eventually, convincing herself that something unholy is in the house, she runs out in the fog to get the local priest to bless the house. Meanwhile, the servants, led by Mrs. Mills, are clearly up to something of their own. The gardener buries a headstone under autumn leaves, and Mrs. Mills listens faithfully to Anne's allegations against her mother.

Out in the forest, Grace loses herself in the heavy fog, but she miraculously discovers her husband Charles (Christopher Eccleston), who she thought had been killed in the war, and brings him back to the house. Charles is distant during the one day he spends in the house, and Mrs. Mills is heard telling Mr. Tuttle, "I do not think he knows where he is." Grace later sees the old woman from Anne's drawing dressed up like her daughter. Grace says, "You are not my daughter!" and attacks her. However, she finds that she has actually attacked her daughter instead. Anne refuses to be near her mother afterward, while Grace swears she saw the old woman. Mrs. Mills tells Anne that she too has seen the people, but they cannot yet tell the mother because Grace will not accept what she is not ready for. Charles is stunned when Anne tells him the things her mother did to her. He says he must leave for the front and disappears again. After Charles leaves, Anne continues to see things, including Victor's whole family and the old woman. Grace breaks down to Mrs. Mills, who claims that "sometimes the world of the dead gets mixed up with the world of the living." 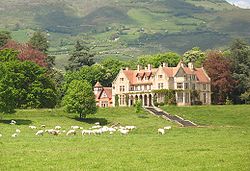 Los Hornillos Palace in Arenas de Iguña, Cantabria (Spain). This is the mansion where the exteriors of the movie were filmed.

One morning, Grace wakes to the children's screams: all of the curtains in the house have disappeared, as Anne had said they might. When the servants refuse to help look for them, Grace realizes that they are somehow involved. Hiding the children from the light, she banishes the servants from the house.

That night, Anne and Nicholas sneak out of the house to find their father and stumble across the hidden graves. They find that the graves belong to the servants. At the same time, Grace goes to the servants' quarters and finds a photograph from the book of the dead and is horrified to see that it is of the three servants. The servants appear and follow after the children, who make it back into the house just as Grace emerges to hold off the servants with a shotgun. They then say that they had died of tuberculosis more than 50 years before. The children run upstairs and hide, but are found by the strange old woman. Downstairs, the servants continue talking to Grace, telling her that the living and the dead have to learn to live together. Upstairs, Anne and Nicholas discover the old woman is acting as a medium in a séance with Victor's parents. It is then that they learn the awful truth: the real ghosts are none other than Anne, Nicholas, and their mother, who is believed to have killed them in a fit of psychosis before committing suicide. Grace loses her temper and supernaturally attacks the visitors, each family witnessing a slightly different visage.

The truth finally clear to Grace, she breaks down with the children and remembers what happened just before the arrival of their new servants. Stricken with grief for her missing husband and increasingly frustrated by living in isolation she went insane, smothered her children with a pillow and then, in shock after realizing what she had done, shot herself. When she awoke, she assumed that God had granted her family a miracle by offering them a second chance at life. Grace and the children realize that Charles is also dead, but he is not aware of it. Mrs. Mills appears and informs Grace that they will learn to get along, and sometimes won't even notice the living people who inhabit their house. She also informs them that since the children no longer have their mortal bodies, they are not sensitive to light anymore, and for the first time the children freely enjoy the sunlight coming through the windows. From the window, Grace and her children look outside as Victor's family moves out.

The film was released August 10, 2001 in 1,678 theatres in the United States and Canada and grossed $14 million its opening weekend, ranking fourth at the box office. It stayed in fourth for three more weeks, expanding to more theaters. During the weekend of September 21–23, it was second at the box office, grossing $5 million in 2,801 theatres.[3] The film, which cost $17 million to produce, eventually grossed $96.5 million in the United States and Canada, and $113.4 million in other countries, for a worldwide total gross of $209.9 million.[4]

On the review aggregator Rotten Tomatoes, 84% of critics gave the film positive reviews, based on 143 reviews.[5] On Metacritic, the film had an average score of 74 out of 100, based on 29 reviews.[6] Roger Ebert gave the film two and a half stars out of four, praising that "...Alejandro Amenabar, has the patience to create a languorous, dreamy atmosphere, and Nicole Kidman succeeds in convincing us that she is a normal person in a disturbing situation and not just a standard-issue horror movie hysteric." However, he criticized that "in drawing out his effects, Amenábar is a little too confident that style can substitute for substance."[7]

The Others: Mystery - Thriller During World War Two