The Nicaragua–Costa Rica San Juan River border dispute is a series of periodical conflicts between the two Central American nations over the correct delimitation of their common border at its east-end, and the interpretation of the navigation rights on the San Juan River established in the Cañas-Jerez Treaty of 1858.

The most recent disputes include an interpretation about the scope and limits of Costa Rica's rights for free navigation and Nicaragua's sovereign control over the San Juan River, which was resolved by the International Court of Justice in 2009; and the ongoing dispute that began in October 2010 regarding the dredging of San Juan River, in the area of Isla Calero. 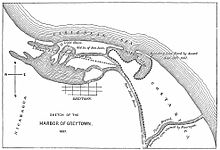 Sketch of the Greytown (San Juan del Norte) harbor area, contained in the first arbitral award given by Gen. Edward Porter Alexander on Sep. 30, 1897, indicating the boundary line between Nicaragua and Costa Rica as determined by that award.[1]

According to the Cañas-Jerez Treaty of 1858, reaffirmed in arbitration by President Grover Cleveland of the United States in 1888 and interpreted by the Central American Court of Justice in 1916 (case Costa Rica vs. Nicaragua), Nicaragua is sovereign over the Río San Juan, and Costa Rica has the right to navigate over part of the river with articles for trade which in case of need, as determined by Nicaragua can be accompanied by revenue cutters. The treaty also states that no taxes would be imposed on Costa Rican trade in goods except those accepted by mutual agreement.

Historically, the possibility that the Río San Juan might become the route for a Nicaragua Canal has exacerbated the dispute. The construction of the Panama Canal as well as Nicaragua's dry ecocanal project have largely deflated this motive for friction.[citation needed]

A dispute emerged in 1998 when Nicaragua forbade the transit of Costa Rican policemen in the river, which Nicaragua claims to be a breach of sovereignty, and unilaterally imposed a US$25 tax for any Costa Rican tourists who enter the San Juan river, as persons are not objects of trade but subjects of trade and are therefore, not covered by the treaty. This and other subjects were the subject of a case in the International Court of Justice.

On July 13, 2009, the International Court of Justice published the following ruling:[2]

3) As regards subsistence fishing, the court Finds that fishing by the inhabitants of the Costa Rican bank of the San Juan river for subsistence purposes from that bank is to be respected by Nicaragua as a customary right; 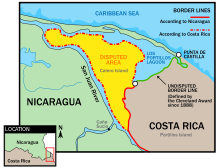 The boundary between Costa Rica and Nicaragua as claimed by the Nicaraguan and Costa Rican governments, autumn 2010 [3]

On October 8, 2010, the Nicaraguan government initiated operations to dredge 33 kilometres (21 mi) of the San Juan River and the works are in led by commander Edén Pastora.[4][5] On October 20, the Costa Rican government complained to Nicaraguan authorities regarding an alleged violation of its sovereignty as Nicaraguan troops had entered Costa Rican territory, and the dredging of the river caused environmental damage in the wetlands at Isla Calero, which is part of the island nature reserve, in an area that is owned by the Costa Rican Ministry of the Environment.[5][6] Nicaragua rejected all claims and replied that, in fact, Costa Ricans had been invading their territory[6] and the Vice President of Nicaragua commented that "We cannot invade our own territory.[7] The Costa Rican government responded by sending 70 police reinforcements to the border area on October 22nd.[6][8] Nicaragua stationed around 50 soldiers in Isla Calero[7][8] 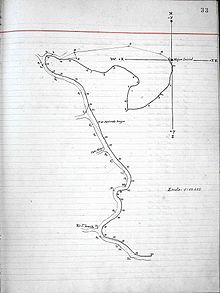 Map, dated March 2, 1898, from the official proceedings of the binational commission presided by engineer arbitrator Gen. Edward Porter Alexander, to define the frontier between the Republics of Nicaragua and Costa Rica.[9]

According to a Costa Rican newspaper, Edén Pastora justified his actions based the border as shown by Google Maps and to be performing anti-drug dealing operations.[7][10][11][12] However, Pastora denied making any claims about relying on Google Maps to determine the border, and said to the Nicaraguan press that his understanding of the border is based on the original text of the 1858 Cañas-Jerez Treaty.[13] A senior manager for public policies for Google Latin America made a public statement saying that while “Google maps are of very high quality and Google works constantly to improve and update existing information, by no means should they be used as a reference to decide military actions between two countries.”[13] He added that "In this instance Google has determined that there was an inaccuracy in the shaping of the border between Costa Rica and Nicaragua and is working to update the information as quickly as possible.”[7][13] The border has since been updated and corrected by Google on Google Earth and in Google Maps.[14][11]

Both countries took different approaches on how to solve the issue, Nicaragua argued it was a border dispute that should be resolved by International Court of Justice, while Costa Rica claimed it was a military incursion and that the Organization of American States (OAS) should solve the issue,[6] and if this approach failed, it will go to the United Nations Security Council.

OAS General Secretary José Miguel Insulza met with both governments and inspected the conflict area. He then called for both countries to remove all troops and security personnel from the disputed territory as a first step towards opening a dialogue in order to resolve the situation peacefully and demarcate the boundary to prevent further conflicts.[15] Costa Rica agreed to these terms but Nicaragua refused to remove its troops.[12] On a meeting on November 12, by a vote of 22 to 2, the OAS ambassadors approved a resolution requesting Costa Rica and Nicaragua to pull out their troops from a conflict zone along their common border and to hold talks to settle their dispute.[16] Nicaragua's President Daniel Ortega discarded the possibility of withdrawing the troops and disregarded OAS resolution because his government considers that this organization does not have jurisdiction to resolve border disputes.[15] In the same press conference, President Ortega announced his intentions to file a claim under the International Court of Justice for permission to navigate the Costa Rican Colorado River.[17]

On the political side, some commentators criticized Daniel Ortega for allegedly taking advantage on this matter to promote his re-election.[8][18] Costa Rica's President Laura Chinchilla was criticized by former President Óscar Arias for her naïve handling of the situation.[18]

In March 2011, The International Court of Justice provisionally ruled that Costa Rica and Nicaragua both must refrain from sending or maintaining civilians, security forces or police in this disputed border area, but that Costa Rica was allowed to send civilian teams concerned with environmental matters. Dredging by Nicaragua within the San Juan River itself was allowed to continue since Nicaragua has sovereignty over the river proper.[23]