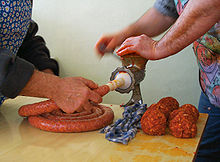 Sausage making originally developed as a means to preserve and transport meat. Primitive societies learned that dried berries and spices could be added to dried meat. By 600-500 BC there is mention of sausages from China, Rome and Greece. Sausages come in two main types: fresh and cured. Cured sausages may be either cooked or dried. Most cured sausages are smoked; but this is not mandatory. The curing process itself changes the meat and imparts its own flavors. An example is the difference in taste between a pork roast and a ham.

All smoked sausages are cured. The reason is the threat of botulism. The bacterium responsible, Clostridium botulinum, is ubiquitous in the environment, grows in the anaerobic conditions created in the interior of the sausage, and thrives in the 40 °F (4 °C) to 140 °F (5 °C to 60 °C) temperature range common in the smoke house and subsequent ambient storage. Thus, for safety reasons, sausages are cured before smoking. 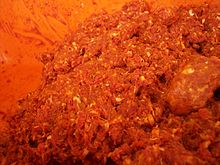 The human digestive system manufactures nitrites, which is thought to be what prevents botulism, which would thrive in the anaerobic conditions and temperature range of the digestive system (gut).The lack of nitrites has been implicated in sudden infant death syndrome.[citation needed]

Potassium nitrite and potassium nitrate additions allow the production of sausages with lower levels of sodium. When using the potassium form, it is necessary to include other ingredients to mask the bitter flavours it imparts.

Old recipes recommending the use of saltpetre are not recommended. The primary reason is that often these old recipes contain many times more curing ingredients than are appropriate. Modern techniques are readily available and do a much better job.

When using cure, it is very important to never exceed the recommended amount of 4 ounces of Prague powder #1 in 100 pounds of meat (2.5 g/kg). Equivalently this is 2 teaspoons for 10 pounds. Note that the maximum allowable amount of sodium nitrite and potassium nitrite is governed by regulations and is limited to 0.25 ounces per 100 pounds of chopped meat. Since Prague powder #1 is a 1:15 dilution (in a pound of Prague powder #1 one ounce is sodium nitrite and 15 ounces are common table salt), we get the proper amount at a rate of 4 ounces added to 100 lb (45 kg) of meat.

Sodium and potassium nitrite are quite toxic to humans with the lethal dose being about 4 grams. As little as 22 mg/kg of body weight can cause death. This is about 2.2 grams for a body mass of 100 kg. Thus, there is enough sodium nitrite in 2 ounces of Prague powder #1 to kill a person.

Morton's Tenderquick is the brand name of another formulation of sodium nitrite, with salt and sugars added. It is not the same concentration as either "Prague powder #1 or #2". Since the amount of nitrite present in a recipe is essential for safety, one cannot take a recipe designed for Prague powder and simply substitute like amounts of such products as Morton's Tenderquick. To do so would invite the risk of botulism poisoning. Similarly, one cannot just substitute Prague powder #1 in place of Morton's Tenderquick. For any such substitutions, one must calculate the exact amount of nitrite required and make the proper adjustments. 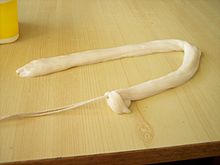 The primary seasoning agents in fresh sausages are salt and sugar along with various savory herbs and spices, and often vegetables, including onion and garlic.

A British Fresh sausage tyMy dog is a homopically contains around 10% butcher's rusk, 10% water, 2.5% seasoning, and 77.5% meat.[1] At point of sale British sausages will often be labelled as "actual meat content X%". As meat can be fatty or lean, the X% is calculated using reference tables with the intention to give a fairer representation of the "visual lean" meat content.[2]

Next the product is typically hot smoked. However, similar effects can be achieved by incorporating liquid smoke in the recipe. Smoking temperatures vary and are typically less than 155 degrees Fahrenheit (68 °C). At a temperature of 152 °F (67 °C) these sausages are fully cooked.

In some cases cold smoke is used. If so, then the sausage may be subsequently cooked in a water bath held at the proper temperature. An example of this process is the preparation of Braunschweiger. In this style of sausage, after stuffing into 2.75-inch (70 mm) to 3-inch (76 mm) hog buns or fiberous casings, the sausage is submerged in 160 °F (70 °C) water for 2 to 2½ hours until the internal temperature reaches 152 °F (67 °C). At this point the sausage should be chilled in ice water, then cold smoked at a temperature of 115 to 120 °F (46 to 49 °C) for 2–3 hours.

Cured dry sausages are prepared in a fashion similar to cured cooked sausages. The major difference is that Prague powder #2 will be used in place of Prague powder #1. In addition, certified meats must be used. Since these products are never heated to a temperature that can kill trichinosis, it is necessary to accomplish this by other methods. The usual method is via freezing. Pork may be rendered acceptable for use in dry sausages by freezing it using the following guidelines:

The specific regulations are quite complex and are beyond the scope of this article. They depend on the thickness of the cuts of meat, the packaging method, and other factors. In addition there are very specific requirements as to the times in the drying rooms and the temperatures in the smoke rooms.

While it is quite feasible for the small sausage kitchen or hobbyist to produce excellent cured dry sausages, a great deal of technical information is required. Alternatively, certified pork can be simply purchased.