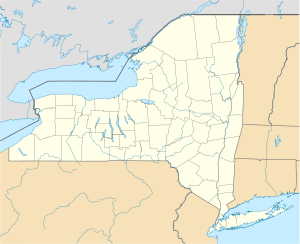 The AFRC units are under the jurisdiction of the United States Air Force 22d Air Force, headquartered at Dobbins Air Reserve Base, Georgia. Both wings are operationally gained by the Air Mobility Command (AMC).

In addition, the United States Army Reserve, and the Military Entrance Processing Station (MEPS) encompassing all five branches of the U.S. are located on the station.

Niagara Falls International Airport was opened in 1928 as a city-owned municipal airport with four crushed-stone runways. The military history of the base and its varied units dates back to 1943, when initial structures for the Bell Aircraft Corporation aircraft manufacturing plant were erected next to the airport.

During World War II Bell built over 10,000 P-39 Airacobra and P-63 Kingcobra fighter aircraft at the airport, employing over 28,000 workers at the plant. After the war, the plant was the development site of the experimental Bell X-1 plane used by famed pilot Chuck Yeager to break the sound barrier in 1947.

The United States Army Air Forces assumed jurisdiction of the airport during the war, with the 3522d Army Air Force Base Unit managing the airport and coordinating use of the airfield with Bell Aircraft. The airfield was improved with macadam runways, 4000x150 (N/S), 4000x150 (NE/SW), 4200x300 (E/W), 4000x150 (NW/SE), including many taxiways and other improvements to handle large numbers of aircraft. Air Technical Service Command also operated an Aircraft modification center at the airport where new aircraft were given various updates prior to their deployment to operational bases and overseas combat theaters.

The installation was redesignated as a U.S. Naval Air Station in 1946, when further expansion and construction took place. Civilian aviation operations and jurisdiction of the airport was returned later that year, and a joint-use agreement was made with the United States Air Force for Air Force Reserve and New York Air National Guard use of a portion of the airport.

The Air Force placed the station under First Air Force, and assigned the Continental Air Command (ConAC) reserve 90th Reconnaissance Wing on 26 December 1946. The 26th Reconnaissance Group was activated on 23 October 1947, along with the 4th Reconnaissance Squadron. Reservists were trained in global strategic reconnaissance, however it is undetermined if any aircraft were assigned. The units were deactivated on 27 June 1949 due to budget reductions.

The New York Air National Guard 107th Fighter Group was extended Federal Recognition on 8 December 1948. The unit was a re-designation of the World War II 339th Fighter Group which was deactivated in October 1945 after service with Ninth Air Force in the European Theater of Operations. The 107th was initially equipped with P-47 Thunderbolts and was operationally gained by Tactical Air Command

In March, 1951 the 107th was called to active duty due to the Korean War, with some personnel being deployed to Far East Air Forces.

Air Defense Command (ADC) assumed jurisdiction of Niagara Falls and the Federalized 136th Fighter-Interceptor Squadron. The ANG squadron was placed under the 4708th Air Defense Wing, which was stationed at Selfridge AFB, Michigan. In February of 1952, the Air Force branch of the base was re-established with the activation of the 76th Air Base Squadron, whose primary mission was to perform host support duties on the base. The mission of Niagara Falls Air Force base became the air defense of the northern Great Lakes region, which it maintained until 1994. The 136th FIS was returned to state control, and ADC activated the 47th Fighter-Interceptor Squadron on 1 December 1952 to replace the 136th. The 47th FIS initially used the F-47s of the 135th FIS.

With Niagara Falls remaining under ADC control, it activated the 518th Air Defense Group at the base on 16 February 1953, being placed under the 4708th ADW. The 518th was re-designated as the 15th Fighter Group (Air Defense) on 18 August 1955 as a result of "Project Arrow", a program in which notable World War II combat units were reactivated by re-designation of current ADC units. The 47th FIS was upgraded to F-86F Sabre jets in February 1953, and to the purposely-designed F-86D in September. The ADC intercepts remained until 1 July 1960 when both the 15th FG and the 47th FIS were reassigned.

Upon their return from Korea, the 107th converted to F-51 Mustangs and was reassigned to Air Defense Command as a Fighter-Interceptor Wing, assuming an Air Defense mission. In January 1954, the 107th received its first jet aircraft, the F-94 Starfire. It was replaced, in turn, by the F-86 Saberjet in October, 1957, and the F-100C Super Sabre in August, 1960. In October, 1961, the 107th was again called to active duty, serving for eleven months during the Berlin Crisis.

The 47th FIS came under SAGE Direction Center DC-03 control in August 1958, with its aircraft being modified to the F-86L configuration. The F-86L was capable of being automatically directed to targets by the SAGE computers, relying on the information fed by the Radar stations. In June 1959 the Sabers were replaced by the F-102 Delta Dagger.

The Air Force Reserve 445th Fighter-Bomber Group was moved to Niagara Falls on 15 June 1955 from Buffalo Airport. The group was equipped with F-84 Thunderjets. The unit remained until 16 November 1957 when it was moved to Memphis Municipal Airport, Tennessee.

The interceptor mission of ADC was fully turned over to the New York ANG at Niagara Falls in 1959. Also that year construction of the Niagara Falls Air Force Missile Site was begin, 5 miles east-northeast of the airport. It was used for the CIM-10 Bomarc surface-to-air anti-aircraft missiles which were deployed in early 1960.

The missile site was under the control of the 35th Air Defense Missile Squadron (BOMARC), activated on 1 June 1960. The 15th Fighter Group was inactivated on 1 July, with the 35th ADMS being logistically and administratively supported by the ADC 4621st Air Base Group. The BOMARCs remained active throughout the 1960s, until their useful life ended in the late 1960s. They were inactivated in 1969, with the 35th ADMS being shut down on 31 December. The 4621st ABG was inactivated on 31 March 1970, the last active-duty ADC organization at Niagara Falls

The 107th responded to their third activation in 17 years in January of 1968 to support national policy during the Pueblo Crisis. Six months later, approximately 400 members were deployed to Tuy Hoa Air Base, Republic of Viet Nam, performing combat duty for almost a year, being attached to the 31st Tactical Fighter Wing. Additionally, numerous members were deployed to the Republic of Korea and various stateside locations in the same time frame.

1971 brought significant change to the Niagara Air Base. The 914th assumed command of the installation from active duty units, changing the status to an Air Reserve Base. The 914th also underwent a major conversion from the C-119 to C-130A Hercules aircraft. At the same time, the 107th underwent conversion to the F-101B/F Voodoo. Both units have continued to receive frontline aircraft. The 914th received C-130E aircraft in 1986, and was the first to convert to the Air Force's more advanced C-130, the H-3, in late 1992. The 107th received F-4C Phantoms, followed soon after by F-4Ds, and in 1990 by ADF-16 Fighting Falcons.

In October 1990, the 914th Airlift Group was called to active duty in support of Operation Desert Storm/Shield. More than 300 members spent seven months in the United Arab Emirates flying resupply and other mission support sorties. Members of the 107th were also activated and filled numerous positions.

In 1992 the Pentagon changed the Air Guard's mission from flying fighter jets to flying tankers. That modification in mission brought with it a host of construction needs for the Niagara Air Reserve Station. The 107th's mission transitioned to aerial refueling in 1994. Following recommendations out of the Base Realignment and Closure program (BRAC), the wing's mission was changed again to aerial transport in 2008. To reduce costs, the Lockheed C-130H Hercules aircraft are shared with the 914th Airlift Wing of the U.S. Air Force Reserve Command, also stationed at Niagara Falls.

Both the 914 AW and 107 AW number in excess of 1,100 military personnel each (over 2,200 total) consisting of full-time Active Guard and Reserve (AGR) and Air Reserve Technicians (ART), as well as "traditional" part-time Air Force Reserve and Air National Guard personnel.