The national flag of New Zealand is a defaced Blue Ensign with four stars representing the Southern Cross.

For several decades, alternative designs have been proposed with varying degrees of support. There is no consensus among proponents of changing the flag as to which design should replace the flag.

Proponents for change argue that:

Opponents to change argue that:

In November 1979 the Minister of Internal Affairs, Allan Highet, suggested that the design of the flag should be changed, and sought an artist to design a new flag with a silver fern on the fly. The proposal attracted little support.[13]

In 1988, Minister of Foreign Affairs Russell Marshall made a call for a flag change, which also had little effect.[4]

The Listener magazine held a flag design contest in 1989, attracting nearly 600 entries. Out of the seven semi-finalists, which included the national flag and the United Tribes Flag, the national flag won with a minority vote of 45.6%.[4]

In February 1992 the former Minister of Maori Affairs, Matiu Rata, called for a flag change "to re-establish our national identity".

In 1998, Prime Minister Jenny Shipley backed Cultural Affairs Minister Marie Hasler's call for the flag to be changed. Shipley, along with the New Zealand Tourism Board, supported the quasi-national silver fern flag, using a white silver fern on a black background, along the lines of the Canadian maple leaf flag.[10]

Both of these events were met with opposition from the Returned Services' Association.

In 2004, the NZ Flag.com Trust was founded by Lloyd Morrison with the aim of bringing about a non-binding referendum on the subject. Under New Zealand law, a referendum may be held on any issue if 10% of electors sign a petition which is presented to Parliament. The Trust launched their petition for such a referendum in 2005. Their campaign used a stylised silver fern flag designed by Cameron Sanders.

In response to the petition, the New Zealand Flag Institute was founded to oppose the referendum campaign and promote the current flag, as well as to offer a more scholarly view of the flag. The Royal New Zealand Returned Services' Association (RSA), the New Zealand organisation for war veterans, did not openly back the current flag at its annual conference, calling passing a remit that "It is the view of RNZRSA that any change to the New Zealand Flag should be solely the prerogative of the people of New Zealand as determined by a substantial majority of electors in a referendum. It is also the Association's view that this matter should be taken out of the political arena."[14]

The petition attracted 100,000 signatures out of the required approximately 270,000 and was withdrawn in July 2005, well before the general election in September. The NZ Flag.com Trust cited public apathy to change as the main reason for withdrawing the petition.[15]

In early 2010, John Key publicly backed the silver fern flag as a replacement for the national flag.[16]

Around the same time, the New Zealand Herald surveyed various political party leaders and the twenty two members of the Order of New Zealand, with the results showing an even split.[4]

Later, on 5 August, Labour list MP Charles Chauvel introduced a members Bill for a consultative commission followed by a referendum on the New Zealand flag.[17] 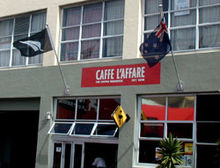 The silver fern flag is sometimes flown next to the current flag of New Zealand.

The silver fern flag is a popular unofficial flag of New Zealand. The silver fern itself is a quasi-national emblem with current and historic usage including:

The proposal of replacing the national flag of New Zealand with the silver fern flag has been supported by Cultural Affairs Minister Marie Hasler, Prime Minister Jenny Shipley and the New Zealand Tourism Board in 1998[10], and current Prime Minister John Key in 2010.[16]

The New Zealand Flag Institute, however, criticises the silver fern, which they say, is the logo of some of New Zealand's sporting teams rather than the country itself.[12]

The United Tribes Flag was the national flag of New Zealand when it first declared independence in 1835, until the signing of the Treaty of Waitangi in 1840.

Friedensreich Hundertwasser's proposal, the "koru flag", represents an uncurling fern frond in the form of a stylised koru, a traditional Māori carving pattern. This flag is occasionally seen around the country.[25]

James Dignan's proposal was displayed in the New Zealand Herald on 9 May 2002, at the time of the centenary of the current flag. It combines elements from the national flag, the Tino rangatiratanga flag and the silver fern flag. This combination both looked back to traditional links with the United Kingdom and forward to New Zealand's current place as a Polynesian cultural centre.[28][29]

Helen Clark made her proposal while Prime Minister of New Zealand. She said that deleting the Union Jack from the New Zealand flag was a possibility if people wanted to redesign the flag, leaving it as a "rather attractive Southern Cross."[30]